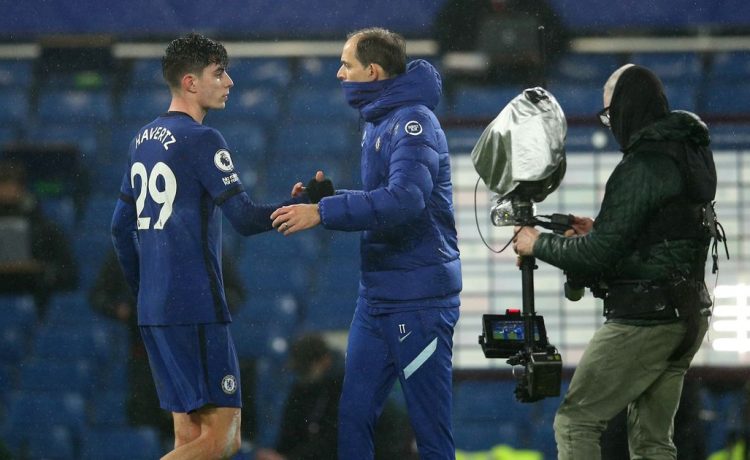 Thomas Tuchel has opened up on the pep talk he gave Kai Havertz which inspired one of the German’s finest performances in a Chelsea shirt.

Havertz’s struggles are well documented and, so far, he has failed to live up to the £72million the Blues paid to sign him from Bayer Leverkusen last summer.

The German attacker was taken off on 65 minutes against Porto last Wednesday after an ineffectual showing in the first leg of the Champions League quarter-final.

But Havertz bounced back emphatically as he picked up one goal and one assist in Chelsea’s 4-1 Premier League victory at Crystal Palace on Sunday.

Outlining what he told his compatriot ahead of the Selhurst Park clash, Tuchel said: “When he stepped out of his comfort zone when he changed club from Leverkusen to Chelsea he absolutely wanted to challenge himself and now it’s on him to show the quality.

“He had showed it already against very strong opponents in Everton and Liverpool. He had a tough match against Porto and the speech was very easy: ‘go and show that you can do better and fight for your place, you get a second chance’.

Was Havertz’s performance against Palace his best in a Chelsea shirt? Have your say in the comments.

“He knew that he had to be more ruthless in his finishing because he has that extra quality and I want him to show it.

“He is about controlling the ball, keeping the ball in difficult situations, having little runs in high positions to finish and assist.

Tuchel also implied Havertz is sometimes misinterpreted by fans, adding: “You cannot confuse his body language with thinking that he does not give everything.

“He’s a very proud character and he’s very aware of his quality and he’s ready to show that.

“What we can demand from him is quality, because he has that, and this is the way we are hoping he will help the team and will become an important player if he can show this regularly.”