Liverpool, Real Madrid and Bayern Munich were all chasing the towering defender, who is now part of Tuchel’s plans after eventually opting to join Chelsea following a stint at Barcelona 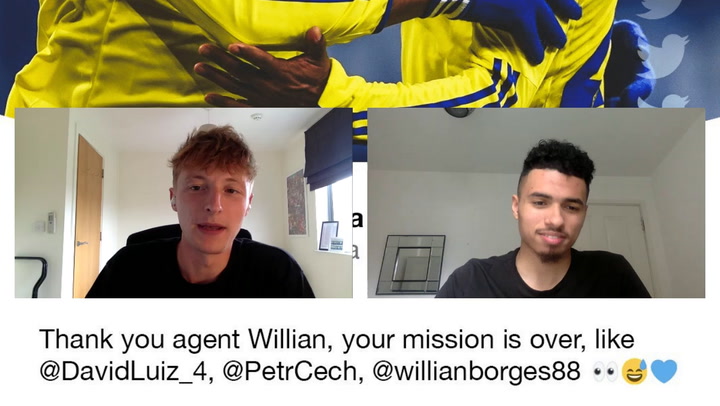 Thomas Tuchel has promoted youngster Xavier Mbuyamba into the Chelsea first-team, a year after he was signed by former Blues boss Frank Lampard.

Chelsea swooped to snap up the the teenager last summer after he was released from Barcelona.

Since then he has began to flourish in Chelsea’s academy after overcoming an initial problem with a knee injury.

The 6ft 5ins defender has been likened to fellow Dutchman Virgil van Dijk, and was even attracting attention from Liverpool not so long ago.

That was when Mbuyamba was just starting out as a professional, having made his debut aged just 16 for Dutch side MVV Maastricht.

In doing so, he became the club’s youngest ever player, and soon had some of Europe’s elite chasing his signature.

Bayern Munich and Real Madrid were also showing interest, as well as Liverpool, while Mbuyamba went on trial with Chelsea, only for him to eventually move to Barcelona.

However, things didn’t quite work out for him at the Nou Camp, with Lampard finally getting his man last year, having previously been hindered by the transfer ban imposed on Chelsea.

Now Lampard’s successor Tuchel is beginning to reap the benefits, as he promoted Mbuyamba earlier this week for his first training session alongside the senior players.

Mbuyamba, 19, was overjoyed, writing on Instagram : “A moment I’ve been working towards since joining this incredible club.

“Truly blessed to be training with the first team this week.

“Lots to learn, and my motivation is on another level right now!”

Chelsea have seen a number of promising youth stars move on in recent seasons, but Mbuyamba will no doubt be buoyed by the rise of Mason Mount into established first team regular, as well as the recent emergence of Trevor Chalobah.

When signing for Chelsea, his agent Carlos Barros admitted the club had gone all out to convince his client that his future would be best served at Stamford Bridge.

Mbuyamba in action for Chelsea’s under-23 side
(

“Chelsea have the best papers. Of course we discussed this extensively last year,” Barros said. “Chelsea gave a fantastic presentation. There is a unique football atmosphere there.

“You immediately sit with the first-team players during lunch and the club has outlined a very ambitious plan for Xavier.”

Mbuyamba has already represented Netherland at under-19 level, and like Liverpool star van Dijk, seemed to slip through the net of the big clubs in his homeland.

“It is strange that they [Ajax, PSV] never came, but the same applies to the KNVB,” he told RTL previously.

“The staff immediately said that they thought it strange that I had never been noticed before.”

Tuchel’s decision to promote Mbuyamba may have something to do with Chelsea missing out on signing centre-back Jules Kounde from Sevilla before the transfer window shut.

Chelsea thought they had agreed a fee with the Spanish club, only for Sevilla to raise their asking price, scuppering a deal for the 22-year-old.