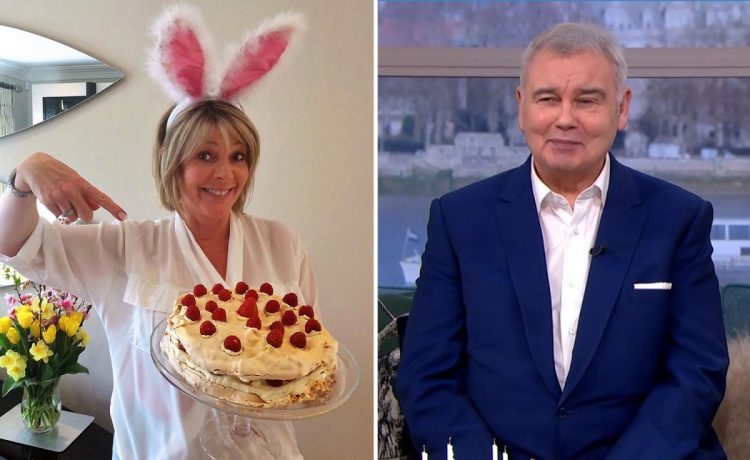 THIS Morning’s Eamonn Holmes was given an Easter treat from his wife Ruth Langsford following his health struggle this week.

Ruth then shared video of the couple’s dog Maggie lying in the sunshine, as she added: “Time to relax.”

The TV presenter’s husband is suffering from chronic pain – and ended up in hospital for it on Thursday.

Today Eamonn said he’s in a “waking nightmare” as he struggled to sleep – only managing two hours because of his mystery condition.

It’s thought Ruth hoped treating him to some delicious grub would help cheer up the 61-year-old.

Eamonn won’t know the results of his MRI scan until next week – so has had to suffer in pain throughout the Easter weekend.

Updating fans on his condition, Eamonn said: “Well time to check in again ….. who’s not having a good night ?

“Who has pain that’s stopping them being in a beautiful dream ? Who is living a waking nightmare through #ChronicPain ? Just trying to get us all speaking to each other and offering comfort and support.”

READ  Love Island cop Mike Boateng ‘told teen girl, 17, “come with me and I’ll show you a good time” while on the beat

He added “Ok so body decided I was enjoying those 2 hours of sleep too much!

“Pain at its worst lying down. So anyone know how to sleep standing up ? Just asking for a friend

“All this talk of pain ….. nothing compared to the pain Jesus went through for us before rising . Part of the message of #EasterSunday … which let’s not forget is today.”

Eamonn Holmes WILL return to This Morning next week after health scare, confirms Alison Hammond as she ‘sends love’