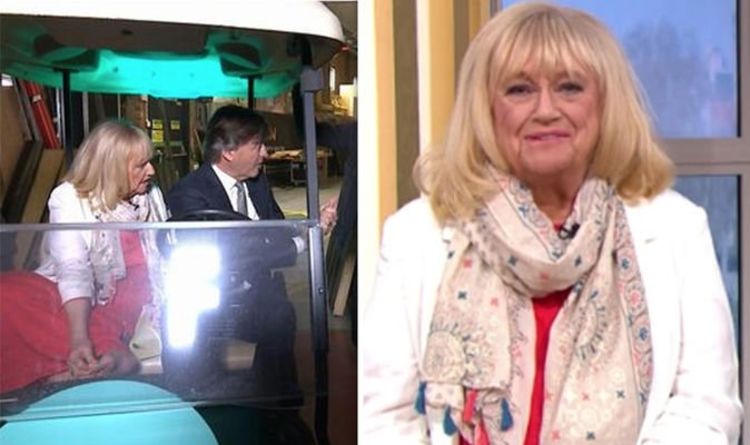 As viewers know, Richard and Judy used to host This Morning as full-time presenters between 1988 to 2001, so fans were delighted to see them on Friday morning when they stepped in for the regular hosts. However, during a chat with Ant McPartlin and Declan Donnelly, fans spotted Judy doing something which horrified them and called for bosses to get Judy to “put her shoes back on”.

On Friday Richard and Judy were joined live in the studio by Ant and Dec ahead of their return to Saturday Night Takeaway this evening.

But before the pair joined Ant and Dec on the other side of the studio, Richard and Judy got into a golf buggy to get to the I’m A Celebrity hosts.

As they drove up, Richard said hello to the Saturday Night Takeaway hosts and said: “It’s good to see you both together again, it’s been a while but it’s fantastic.

“Is it all fully rehearsed and ready to go?”

Dec explained: “We haven’t really started, we’ve still got everything to do but the studio is ready and why don’t you come in and have a look.”

Richard said he wanted to talk to them both first after the break, but viewers couldn’t concentrate on anything during the chat because Judy was distracting them.

Judy could be seen without her shoes on and appeared to be picking her feet live on air.

Taking to Twitter to comment, one viewer tweeted: “Is Judy actually picking her feet on national television?! #ThisMorning.”

Unfortunately for Judy, this wasn’t the only blunder she made on the popular ITV show this morning.

She was caught in an autocue blunder when inviting viewers to watch a best bits showreel of Ant and Dec’s Saturday Night Takeaway.

As the four of them spoke about the guests and challenges in the new show, suddenly Judy looked very confused, interrupting Richard mid-sentence.

She asked: “Have I got to read something here?” leaving the men in hysterics.

Richard scoffed: “This is the kind of nightmare we are talking about.”

Turning back to the camera Judy went on: “Right, it says, the boys are back with a brand new series in the show that combines celebrates and surprises and a whole lot of laughter.”

In unison the men all said: “Run VT.”

Viewers got to watch the trailer for the new show, which Richard will be taking part in.

This Morning continues on ITV on Monday at 10am.