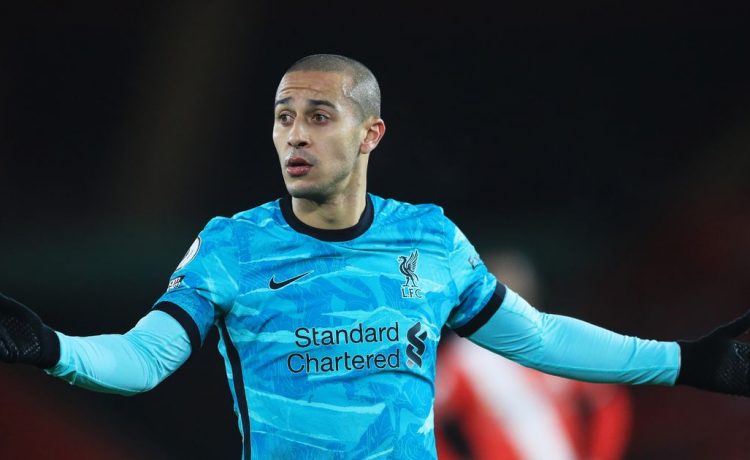 Thiago Alcantara snubbed his Liverpool teammates when naming his dream 5-a-side team but had no qualms about selecting a Man Utd rival.

The Reds midfielder is only just getting his Liverpool career up and running again after recovering from injury sustained in the Merseyside Derby in October.

Despite a significant layoff, Thiago has already proved his qualities in just five appearances for the reigning Premier League champions, most of which have been as a substitute.

But he has risked upsetting the dressing room by leaving all of his fellow Liverpool stars out of his lineup – while making room for United goalkeeper David de Gea.

The likes of Mohamed Salah and co can rest easy though, as Thiago’s snub is not as damning as it seems.

Asked who would earn a place in his dream 5-a-side, the former Barcelona and Bayern Munich midfielder told Liverpoolfc.com : “I always say that more than the best players I always choose the best chemistry and the best friends I have in football.”

He then named his brother Rafinha, who currently stars for PSG, ex-Barca teammate Jonathan dos Santos of LA Galaxy, and Spain colleagues de Gea and Leeds striker Rodrigo alongside him in his five-star cast.

“The only problem is somebody has to defend!” he added.

Liverpool are keen to repeat last season’s success – and you don’t want to miss a thing, surely?

From all of Liverpool’s updates to the must-read Reds stories, get them straight to your inbox without fuss by signing up for the fantastic Mirror Football newsletter!

It’s been an extremely interesting start to the season for Jurgen Klopp’s men.

They got their title defence off to a shaky start as they edged out a seven-goal thriller against Leeds, before going on to conceded seven in a hammering by Aston Villa.

Virgil van Dijk’s season was ended by injury in the 2-2 draw at Everton, leaving the title favourites looking far less secure at the back – especially with Alisson’s injury worries too.

But there’s no slowing down in what is going to be a busy campaign – with Klopp ensuring his men continue at full pace as they bid for more title glory.

The easiest way to keep up with everything going on at Anfield? It’s by signing up.

While none of Liverpool’s current crop made the cut, Thiago was more than complimentary about some of his new teammates.

Full-back Andy Robertson was Thiago’s pick as the funniest member of the Reds’ squad.

“He’s a very funny guy, very natural person,” he said. “Everybody loves him and I think he’s a great teammate.”

Adding of Sadio Mane, he said: “It seems like there is never a bad day for him, he’s there all the time and we appreciate it always.

Who would you pick in Liverpool’s best-ever 5-a-side team? Have your say below.

“Gini Wijnaldum, he’s a beloved human and a great person and always as I say with Sadio as well, there with positive thinking and always there for you.”

While that trio missed out, Thiago was also asked which retired Champions League midfielders he would like to feature in a team with, and this time did pick a Liverpool great.

“I have already played with Xabi Alonso, so this box I can tick it. Why not Steven Gerrard? A legend.

“If I played alongside him it would be a way of learning more [about] football, for sure.”