Jamie Carragher has explained why Manchester United won’t sack Ole Gunnar Solskjaer even after their embarrassing defeat to Liverpool.

United’s struggles under Solskjaer reached an all-time low on Sunday as they were thrashed 5-0 by Liverpool at Old Trafford.

Naby Keita and Diogo Jota put the visitors 2-0 up inside 13 minutes and a quick-fire brace from Mohamed Salah saw Liverpool extend their lead to 4-0 at half-time.

In-form Salah completed his hat-trick after the break and Manchester United finished the harrowing Premier League fixture with 10 men after Paul Pogba was sent off for a late challenge on Keita.

Former Premier League stars Frank Leboeuf and Chris Sutton – and a number of Man United fans – have urged the club to sack Solskjaer following the demoralising defeat, but Carragher believes his job is safe for now.

‘Manchester United are terrified to make a change,’ Liverpool legend Carragher told Sky Sports in the aftermath of the 5-0 capitulation.

‘They’re terrified to bring someone in like they did with [Louis] Van Gaal and [Jose] Mourinho and it’s not a Manchester United guy.

Carragher added: ‘I feel for Ole – that will be the darkest day in his career.

‘I don’t want to get involved in a slanging match, I know Ole said something back [in response to his criticism] and rightly so.

‘Unfortunately, Solskjaer is not Jurgen Klopp, Pep Guardiola or Thomas Tuchel. It’s staring you in the face.’

Red Devils legend Gary Neville says Solskjaer will be under pressure after the Liverpool thrashing but also expects the Norwegian boss to keep his job.

‘If this was in the immediate post-Sir Alex Ferguson era, Ole would be under massive pressure tonight,’ Neville said.

‘But I think the club will hold their nerve. I don’t think they have planned for a new manager this season. I think they will sit with him until the end of the season.

‘There will be a massive outcry from fans and media that Ole should be sacked and I can understand that after that game.

‘It was a monstrously bad day and it will take some recovering from.’ 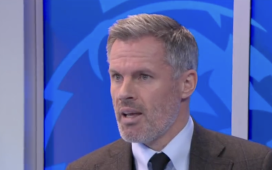 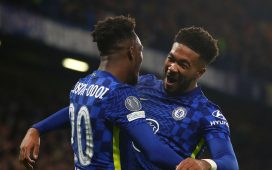 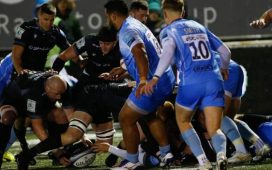