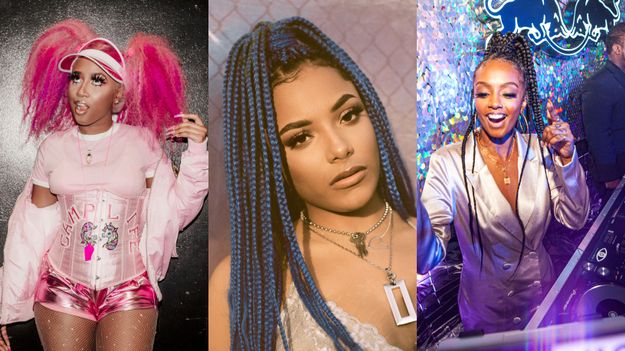 From taking a seat at the proverbial table to the pop-culture phenom that was Hot Girl Summer, a new generation of women in hip-hop are exploring what it means to exist with joy and truth in a world that has historically attempted to dictate the parameters of their freedom. Whether they’re performers like Kelela, who flawlessly experiment with left-of-center soundscapes, or those who engage in radical modes of performance that center body positivity, self-love and autonomy like CupcakKe, Lizzo, and Megan Thee Stallion, women are redefining their place in a music industry that has often been characterized as a boys’ club.

Not only are they taking up space, they’re earning more than ever before while also defining popular culture. This June, Forbes named Rihanna — who has built an incomparable fashion, beauty, and lifestyle empire — the wealthiest female musician in the world; her estimated net worth is $600 million. The fashion powerhouse also sparked an industry-wide move toward inclusivity with the launch of Fenty Beauty, when she intentionally considered the deeper skin tones heritage beauty brands consistently ignored.

But women have always been present and instrumental in bringing hip-hop to a global stage, often offering perspectives and experiences their male counterparts had never been challenged to consider. Pioneers like Queen Latifah, MC Lyte, Salt-N-Pepa, and many, many more helped pave the way for au courant names like Cardi B and City Girls to collect their accolades. Despite a generational gap, a haunting dissonance remains between the experiences of women artists and their male counterparts.

Pay inequity, labor inequality, and imbalanced opportunities still plague the music industry. A study conducted by the USC Annenberg Inclusion Initiative revealed that over 40 percent of women working in music felt their skills were discounted by their male colleagues, while 39 percent had experienced stereotyping or sexualization in some form. The numbers are pretty abysmal where opportunities in creative roles are concerned, too. Of the 700 popular songs released between 2012 and 2018 the study profiled, only 21.7 percent were credited to women, 12.3 percent of the songwriters were women, and only 2.1 percent of women were producers.

So what does it truly mean to center women and to cultivate infrastructures that encourage equality across the board? MTV caught up with six women musicians at Red Bull Music Festival Atlanta last month to hear their thoughts.

'This is a banger': Watch as Gen Z twins hilariously react after hearing Dolly Parton, Phil Collins for the first time

Everything: The Real Thing Story review – the searing saga of Britain's soul pioneers

The Streets, EartH, review: The flinching star Mike Skinner still has something to say after lockdown