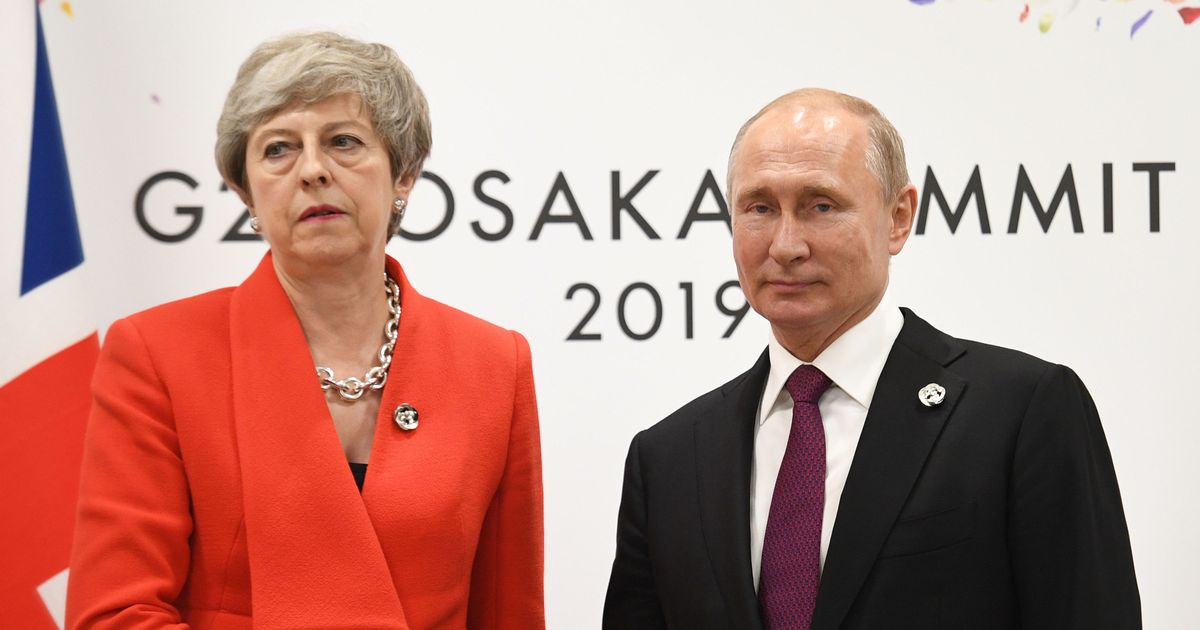 Theresa May’s could barely disguise her disdain for Vladimir Putin as the pair met at the G20 in Osaka.

The Prime Minister, who has not shied from criticising the Russian premier over the Kremlin’s involvement with the Salisbury poisoning, did not catch Mr Putin’s eye as they posed for photos together in Japan.

Mrs May has insisted there could not be “business as usual” with Russia after the Skripal attack and her frosty welcome set the tone for a robust exchange.

She told Mr Putin “there cannot be a  normalisation of our bilateral relationship until Russia stops the irresponsible  and destabilising activity”, Downing Street said following their meeting.

Theresa May told Vladimir Putin that “the use of a deadly nerve agent on the streets of Salisbury formed part of a wider pattern of unacceptable behaviour and was a truly despicable act that led to the death of a British citizen, Dawn Sturgess,” Downing Street said.

“She was clear that the UK has irrefutable evidence that Russia was behind the attack – based on painstaking investigations and co-operation with our allies.

“She said that this behaviour could never be repeated and that the UK wants to see the two individuals responsible brought to justice.

“The Prime Minister underlined that we remain open to different relationship, but for that to happen the Russian government must choose a different path.”

Ahead of the exchange Mr Putin did little to improve Anglo-Russian relations as he sought to downplay the Salisbury poisoning which led the UK and allies to expel Russian diplomats.

In an interview with the Financial Times he dismissed the Salisbury incident as “fuss about spies and counter-spies” that was “not worth serious interstate relations” and said “traitors must be punished”.

Mrs May is expected to demand Mr Putin hand over the two Salisbury poisoning suspects to face justice to build bridges with the UK.

She will tell him: “We believe these individuals should be brought to justice.”

Mrs May yesterday revealed that Britain was prepared to reopen diplomatic relations – but only if Russia promised to stop activities that undermined international security.

President Putin’s regime has been accused of interfering in foreign elections, supplying weapons to separatists in the Ukraine who shot down a passenger jet and propping up Syrian dictator Bashar al-Asad as he launched chemical weapons attacks on his own people.

The novichok attack prompted the highest number of diplomatic expulsions on both sides since the Cold War.

Mrs May said: “I’m going to make absolutely clear the position that the EU takes in relation to what happened in Salisbury. We believe these individuals should be brought to justice.

“It is possible for us to have a different relationship with Russia, but Russia does need to stop its activity that undermines our collective security and undermines international treaties.”

She added: “What this meeting enables me to do is to give that very clear message leader to leader.”

Whitehall aides said the PM was prepared to ask “tough questions” and was not afraid of tackling difficult issues “head on”.

Downing Street said that the talks did not represent a “normalisation” of relations.

Mrs May met the Russian President briefly at a G20 summit in Argentina in November when he approached her informally.

Mr Putin said this month the two countries should turn a page on the Skripal episode and that he hoped the next PM would move on from it.

But Boris Johnson , the Tory leadership favourite, was sharply critical of Russia’s actions in Syria as foreign secretary.

Before the poisoning he had travelled to Moscow in December 2017 to meet the long-serving Russian foreign minister Sergei Lavrov.

In the first trip there by a ­foreign secretary in five years, hapless Mr Johnson began a joint press conference with his Russian counterpart with a joke about Mr Lavrov snapping up Bentleys.

It set the scene for a frosty press conference, which he ended with the undiplomatic suggestion that Mr Lavrov had gone through his coat pockets.

British prosecutors have charged two Russian military intelligence officers, known by the aliases Alexander Petrov and Ruslan Boshirov, with attempted murder in their absence over the attack.

The two men issued a bizarre statement on Russian State television following the incident, claiming they were tourists and had memorised the height of Salisbury cathedral spire.

But they were later unmasked as members of the GRU, Russia’s intelligence and defence agency, although they continued to deny responsibility.

“It’s a long-standing position that Russia does not allow the extradition of its nationals.

“But there are European arrest warrants out for these individuals and if they step foot outside Russia then we will be making every effort to ensure that they are brought to justice.”

The loss of British diplomats in Moscow after the attack has severely hindered the UK’s ability to analyse Russia from inside the country, sources said.

Mrs May insisted she had “no argument” with the Russian people themselves.

“Our position in relation to what happened on the streets of Salisbury is well known and it has not changed,” she added.