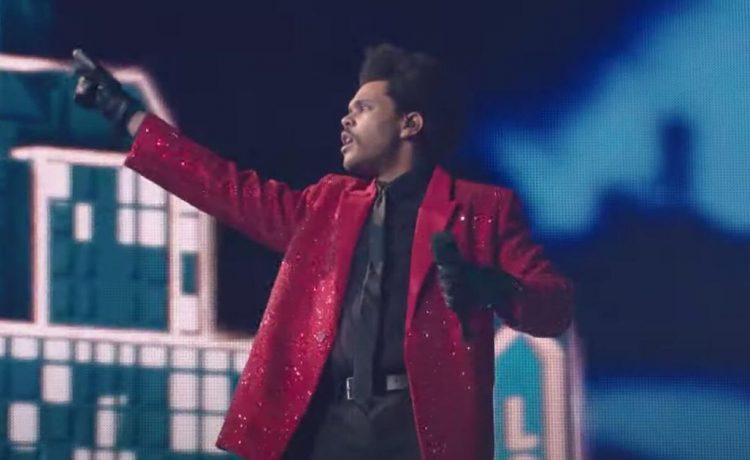 Singer The Weeknd faced special challenges performing at the halftime show for Super Bowl LV between the Kansas City Chiefs and Tampa Bay Buccaneers Sunday. Due to coronavirus precautions, he performed solo, and fans couldn’t surround him on the the field, as has happened in past games. So he rolled out some tricks and special effects of his own for a performance that had some fans raving and others confused.

One of the singer’s biggest hits is Blinding Lights, and he did indeed perform among some blazing, blinding lights, on a set that resembled a carnival hall of mirrors.

The singer has worn bandages and fake blood before as part of an established character, but for the game, he didn’t go with any of those props. His performance did feature a field full of dancers wrapped face in bandages almost like mummies, and otherwise dressed like The Weeknd in black pants and red jackets.

The bandaged dancers drew mixed reviews. “I would admit the Super Bowl halftime show with The Weeknd was pretty colorful and bright,” wrote one Twitter user. “With dancing mummies and less of a stripper party dance show like last year.”

But another wrote, “Ugh. No! The mummy men were so dumb.”

Some people compared The Weeknd’s dancers with other familiar faces, including Star Wars characters and Star-Lord from Guardians of the Galaxy.

Others commented on the swirling angles and striking sets the musician wound his way through. One bit of the performance showing The Weeknd looking almost lost in his own set sparked plenty of jokes.

“Me trying to follow the hostess to my table at the Cheesecake Factory,” snarked one Twitter user.

And another made a game comparison, writing, “The Weeknd doing an impression of the Chiefs, slightly lost and confused.”

Can you hear me now?

The sound would seem to be a vital part of any million-dollar musical performance, yet many viewers said they had trouble hearing the singer.

NBC anchor Maria Shriver tweeted, “I can’t hear the The Weeknd either and my volume is up.”

Another tweet read, “The Weeknd decided to give the best performance he’s ever given and the Super Bowl sound team were like ‘What if we make it so no one can hear him?'”

The NFL posted the full performance to its YouTube channel right after it aired, so viewers can rewatch and judge for themselves.

From smart footballs to contact tracing: How NFL players…