WEARING bandages at the 2020 American Music Awards, there was speculation The Weeknd had undergone plastic surgery.

But the Canadian singer has revealed it was all a set up ahead of his latest freaky aesthetic in his Save Your Tears music video released on Tuesday.

The 30-year-old was unmasked in the pop video, where his face had been altered with prosthetics that emulated major plastic surgery.

Starboy hitmaker Abel Makkonen Tesfaye’s freaky face looked to have been pumped with fillers in his cheeks and lips and his nose chiselled.

The four-minute long film begins with the singer on stage in front of a crowd wearing elaborately decorated Venetian masks.

A spotlight lights up his face, swollen from fake botox injections and looking sore around the pretend surgical scarring mimicking a face lift.

The Weeknd goes on to dance around the room, who sit quietly around tables, while his track plays in the background.

He eventually interacts with the crowd, standing on a table and spraying champagne and sipping on other people’s drinks.

The singer then locks eyes with a young woman – the one other person who is unmasked – before leading her on stage for a dark turn of events.

Taking out a gun from behind his back, The Weeknd forces the terrified girl to press the barrel against his forehead before the shot fades to black.

When the video continues, he waves the gun around the room before holding it to his head, pulling the trigger and seeing confetti pour out.

The Weeknd chuckles to himself as the audience gasp, smiling before the credits begin to roll on the creepy video.

After worrying crowds at the AMA’s, Abel explained that the look was to raise awareness against drink driving following his previous dark hit, Blinding Lights.

While the song is based on his past relationships, the reference to the “blinding lights” are to the street lamps along a dark road.

Inside Olivia Wilde’s colourful past including her secret royal husband

KICK IN THE TEETH

The Weeknd explained that the lyrics depict a man who is so desperate to see his girl, he is prepared to drive while drunk.

He told Esquire: “It’s about how you want to see someone at night, and you’re intoxicated and you’re driving to this person and you’re just blinded by streetlights.

“But nothing could stop you from trying to go and see that person, because you’re so lonely.” 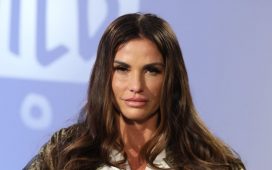