Kingston, New York is a diverse city of 23,000, flanked to the east by Rondout Creek and the Hudson River and to the west by the Catskill mountains. It boasts a rustic industrial waterfront, a colorful historic district and Revolutionary War-era stone buildings. A stranger might call it bucolic. The streets of uptown are bustling with eateries and, of late, places to buy velvet halter dresses, vintage boleros, CBD tinctures, and LCD tea kettles with precision-pour spouts. But strolling by 10-year-old Half Moon Books, passersby might glimpse a different side of this city. The bookshop’s windows exclusively feature nonfiction on the end of the world as we know it. “I started out putting together a window of utopias,” says bookseller Jessica DuPont, “but somehow I ended up with the death throes of capitalism.”

I moved to Kingston from New York City just over a decade ago, on the heels of the 2008 recession. I was three years out of university, but my fledgling career in media stalled with the economic downturn. Friends of mine – two painters, one in her 30s, the other in his 40s – owned a building with an available apartment on the second floor where I could afford to live and work.

My new neighbors – artists, musicians, shop owners, builders, gallerists, restaurateurs – treated me like family. Our community was diverse in age, but we all had our independent creative pursuits in a place with scant economic opportunity otherwise. Thus, many of us shared the same problem: a lack of access to healthcare. America’s healthcare system has long been in shambles: then and still today, where single-payer care was available, premiums and deductibles were astronomical. Luckily, among our friends were doctors and dentists who valued the work we did as equal to their own. So, we came up with a plan. Drawing on the age-old system of barter, we figured out a way to trade – the art of medicine for the medicine of art.

The way you change a system nationally is you do thousands of local things, and eventually the system evolves

In October 2010, we launched our first weekend-long festival of street art, live music and health-related events. We called it O+, like the blood type. The general public attended by donation. Licensed health professionals volunteered to staff our on-site pop-up clinic. Over the years, thousands of participating artists, like Lucius, Spiritualized, and locals who played with the B-52’s and David Bowie, have received medical, dental and wellness services worth hundreds – and in some cases thousands – of dollars. Some artists say the care they received even saved them.

Not long after the first O+, I left Kingston for a work opportunity. Now, I live in Savannah, Georgia. But O+ carried on. Its organizers have constantly expanded to connect the general public with more resources – Narcan kits, CPR training, health expos and year-round wellness classes. Local politicians and residents who take issue with the public art that earns participants dental work and medical appointments have thrown up various roadblocks, but the cause has always been fueled by a sense of rebellion, with the understanding that artists need healthcare, and that art has health benefits.

“The way you change a system nationally is you do thousands of local things, and eventually the system evolves,” says O+ executive director Joe Concra, whose building I lived in when we first got O+ off the ground, and who volunteered full-time for years until grants and donors made it possible to pay modest salaries to three full-time and seven part-time employees. “Every time I walk into the clinic, I think: ‘Oh yeah, it is possible to build a new system.’ I refuse to believe we can’t. So, we keep doing it.”

The week before the 10th annual O+, Concra and I are sitting at the bar in another of Kingston’s independent bookstores, Rough Draft, which opened in 2017 and often hosts fundraisers for local nonprofits. All three baristas are sporting O+ T-shirts.

“When we started this thing,” Concra says, indicating himself, me, the room, “we didn’t even realize what we were doing.” He hops up and darts across the store for a copy of David Fleming’s Surviving the Future (2016), a treatise on sustainable communities “in the aftermath of the market economy” and opens to a chapter called Carnival. “Look,” he says. “We were bringing carnival to the revolution.”

O+ may have brought the carnival. Now, it’s far from alone in the revolution: Kingston’s anti-capitalist, anti-establishment healthcare network is just one example of a model that could supplant corporate America. Locals have launched a non-commercial radio station, Radio Kingston WKNY, with widely representative, hyper-local programming that broadcasts via power generators if the grid goes dark. A regional micro-currency called the Hudson Valley Current now exists to, according to co-founder David McCarthy, “create an ecosystem that includes everyone”.

Agricultural initiatives like Farm Hub work toward equitable, resilient food systems. A network of bike trails quietly connects local towns to local farms (for the day when there is no more gas for our cars). And organizations like RiseUp Kingston, Kingston Citizens, Nobody Leaves Mid-Hudson, and the Kingston Tenants Union facilitate civic engagement, combat displacement, and advocate for policies to address an increasingly dire housing shortage.

From my vantage in the deep south, it looks as though, one mission at a time, Kingston is piecing together the infrastructure for a self-sufficient community – one that wants to survive the possibly impending systemic collapse we nervously joke about over beers at Rough Draft.

DuPont at Half Moon doesn’t believe the average Kingstonite is actively battening down the hatches for a societal implosion. “But,” she says, “I do think the economic pressures – especially skyrocketing housing costs – are causing people to look to new ways to network and support each other.” Meanwhile, directors of the above organizations and others are facing questions like “How can we make sure we have all the resources we need?” and “How do we not leave anyone behind?” quite head-on.

The first weekend in November at a local elementary school, the public is welcome at a conference called Surviving the future: Connection and community in unstable times. “Leading thinkers in the field of system change and transition” will discuss key themes for an inclusive, holistic, “just transition” away from capitalism to something new … whatever that might look like.

Imagining it from the ground up is a big part of the work at hand: On a panel about housing as a human right, co-hosted by Radio Kingston, O+, Hudson Valley LGBTQ Community Center and others, Callie Jayne of RiseUp Kingston says of working models to address her primary concern, the housing crisis: “If it hasn’t been done before, that’s probably a good thing, because what we’re doing now is not working.”

“I’m privileged to be part of the high-level conversations about what happens next,” says Radio Kingston executive director Jimmy Buff. “Other people here are just trying to find a place that doesn’t take 50% of their income, trying to stay in the places they’ve lived for decades and not be gentrified out of their neighborhoods. The climate crisis, potential civil unrest … How do we unify locally to provide for ourselves when all of these things that seem to be going south do indeed go south?”

I wonder about this constantly. But in Savannah – a racially divided, politically divided city of 124,000 with a poverty rate a quarter higher than Kingston’s – I’m in a very quiet minority. There is no AM frequency of ongoing conversations of equity via the diverse voices of my neighbors. I haven’t seen apocalyptic lit in the bookshop windows. When I think about how unprepared we are for a meltdown, I miss Kingston most of all.

“When the shit hits the fan, no one’s coming to rescue us,” Buff says. We’ve got to figure it out ourselves, because this is our city. This is where we live. This is what we’ve got.” 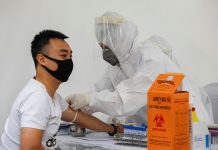 Coronavirus face masks: Are they safe to wear more than once? Dr Hilary's stark warning