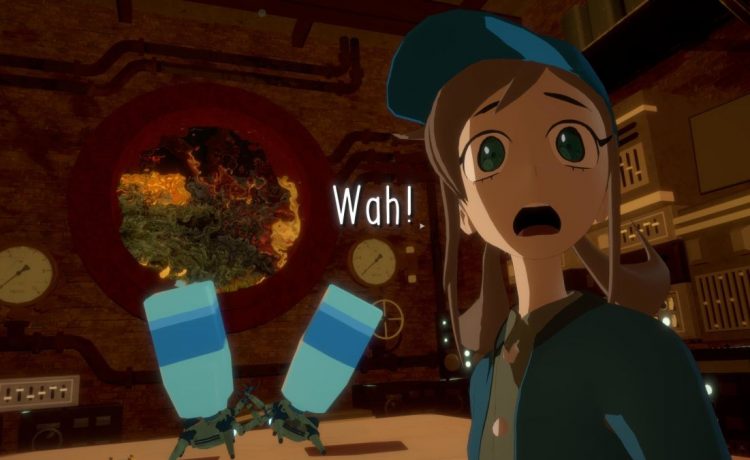 It’s easy to recognize videogames that are influenced by comic books. Games that use flat colors and strong outlines, like Ubisoft’s XIII, or games that use comics in their cutscenes, like Max Payne and Battle Chasers, owe an obvious debt. What might be less evident is that comics have helped to define and develop the language of videogames in more subtle, and interesting, ways throughout the history of the medium.

In the 80s, “evolving 2D graphics enabled the creation of visually distinctive characters in games, as opposed to the generic figures of the previous decade” Professor Nicolas Labarre, video games and comics scholar at University Bordeaux Montaigne, explains. “[C]omics and animated cartoons offered models of visual narrative forms employing simplified yet expressive characters, whose stable appearance made them easily recognizable.” It’s the “amplification through simplification” technique discussed by comics author Scott McCloud in his seminal comic-essay Understanding Comics. In cartoons and early video games, characters are not just simplified in order to make them fit into the limited space of panels and sprites; while unnecessary details are eliminated, the most important features are emphasized and exaggerated instead.

Professor Hans-Joachim Backe from the Center for Computer Games Research of the IT University of Copenhagen draws further connections between characters in comics and videogames, specifically superheroes. “I’d say that there is a legacy of the superhero in what our game avatars can do, how powerful and resilient they are and how we accept that. If we had not had that pretext of the impervious superhero, we’d have a harder time parsing how these game heroes work.”

It’s important to note that in the same period mini-comics were often packaged with the cartridges and were a fundamental tool for enriching games’ narratives and setting their tone. Comics were the basis of our understanding of games’ stories, characters and visuals. And maybe they also taught us how videogames could convey their information. “Games have integrated signifiers that come clearly from comics in their language,” says Professor Backe. “Think of Metal Gear Solid‘s question and exclamation marks, and quest markers in MMOs like World of Warcraft. All those signs we see rendered in the game world, as real as the enemies themselves, but we have that understanding (and my hypothesis is that’s because we have grown up with comics) that they are like thought bubbles; they are something that both exists and doesn’t exist in that world.”

Adventure games in particular have looked to comics for inspiration, from the comic-like panels of Gabriel Knight: Sins of the Father to more interesting points of contact. “The framing you have in games like Maniac Mansion, Zak McKracken and the Alien Mindbenders and Indiana Jones and the Fate of Atlantis is no coincidence” Professor Andreas Rauscher, co-editor of Comics and Videogames: From Hybrid Medialities to Transmedia Expansions, tells me. “In LucasArts’ games frames are very closely connected to comic panels.” In fact, you have a static point-of-view and cinematic spaces arranged in a two-dimensional, comic-book-style mise-en-scéne.

As an example of how comic books have influenced the framing and “the logic of the depicted game world” in adventure games, Professor Rauscher cites the brawl between the protagonist Guybrush Threepwood and Sheriff Shinetop in The Secret of Monkey Island: it takes place out of frame and it’s told through onomatopoeic sound bubbles. “Maybe a working hypothesis is that comic books [and] LucasArts adventures show the same family relations that animated cartoon short films like Looney Tunes and Silly Symphonies provide to the [platforming] genre” Professor Rauscher adds. This influence might have been helped by the fact that various comic authors have worked on adventure games, like Syberia‘s Benoît Sokal, Sam & Max’s Steve Purcell and Maniac Mansion’s Gary Winnick.

After the end of the golden age of point-and-click adventure games, Flash games became the main crossroad between games and comic books. Adobe Flash used to combine art, animation and coding into a single tool, and that “helped a lot for how artists explored the relationship between written work and illustration” game developer Nathalie Lawhead tells me. “I don’t think we would have so many interactive graphic novels right now, if it wasn’t for that early experimentation.”

Exploring the relationship between written work and illustration through softwares like Flash and influences from comic books has also helped developers understand how text and images can work in harmony, thinking of the whole screen as a single visual composition. In videogames, text is often ungracefully placed upon the gameplay and it’s seen as something different, as an element of the user interface, while in comic books (in the best ones, at least) pictures, speech bubbles and sound words all cooperate. We can clearly see this influence in the carefully framed shots and text written directly on the walls of the 3D architecture in Vivid Foundry Corp’s upcoming Solace State: Emotional Cyberpunk Stories.

While Flash allowed comic authors—including Edmund McMillen, developer of Super Meat Boy and The Binding of Isaac—and fans to start making games, bringing their influences into the game industry, it also made it possible to add new playful elements to webcomics. Dr. Daniel Merlin Goodbrey was one of the authors using Flash to experiment with comics in an interactive environment, Goodbrey calls them “hypercomics,” comics based on the branching opportunities of the web and its hyperlinks. His late Flash works, however, like Icarus Needs and The Empty Kingdom, are actual (albeit simple) adventure games using a panel-based structure to manage characters’ movements and environmental storytelling.

Daniele “Demigiant” Giardini is another good example of how Flash brought comic artists into the videogame scene, and how it’s still influencing contemporary game development. Giardini, who started his artistic career as an author and illustrator, learned how to code and make games thanks to Flash, and now he’s known as the creator of HOTween and DOTween, popular animation engines for Unity. Tween engines allow developers to “animate stuff via code in an easy, concise and possibly powerful way,” explains Giardini. “On Flash, we used to have two tween engines, and on Unity we had none. Since I got used to them I had to create a tween engine myself.” Giardini attributes his interest in building flexible structures and architectures to his quest to reach the same spontaneity he has in the comics medium: if he builds solid tools (like his tween engines), he can then create his games without worrying too much about the coding.

With Flash, we started to see hybrids between comics and games, interactive works that were not only influenced by comic books but were actually using their language and what is probably their most important element: the gutter. As explained in McCloud’s Understanding Comics, the gutter, the white space between the panels, is the space where readers use their imagination and their personal experience to connect the discrete parts of a sequence of static images. Daniel Benmergui’s Storyteller, Loveshack Entertainment’s Framed puzzle games series (inspired by a reading of McCloud’s book) and Jason Roberts’ Gorogoa are examples of this trend. Dreamfeel’s Llaura McGee, co-writer and director for If Found…, describes her visual novel as “something that exist[s] somewhere between games and comics.” Ida Hartmann and Niila Games’ Stilstand, meanwhile, could be considered a proper interactive comic story, but it’s sold as a game on Steam.

One of the most interesting cases of influence of the fragmented storytelling of comics is probably Route 59’s visual novel Necrobarista. “The place where I think we draw a lot of influence from comics is actually in our use of animation, which I realize is a tad ironic considering that comics are a static medium” writer Justin Kuiper says. “How do you utilize animation when you’re relying on text to tell your story? Well, I think a principle or lesson that we learned from comics is that action is what happens between the frames. […] In our case, we have the luxury of actually getting to show the action through animation rather than just implying it, and so that’s where we focused our animation: rather than having animations playing at the same time that there’s text on screen (where it would distract people from reading), most of the animation in Necrobarista exists in the transitions that carry you from shot to shot.”

From comics, games have learned how to visually represent characters and information, how to frame environments, how to wrap every element—from images to text—into an orchestrated visual composition, while still leaving room for imagination, and they can still learn a lot. As If Found…’s co-writer Eve Golden-Woods tells us, “games will find that expansion and development by supporting the people who are already out there doing incredible things on small, local scales. If you look on itch.io […] you’ll see all kinds of game makers bringing in influences from comics, but because they don’t have the audience, that design work isn’t recognised and passed around and communicated.” Even when we talk about future perspectives of the influence of comics on video games, what we actually need is a more diverse and open community and more curious players.