The Sims franchise has released some real bizarre packs in its time. There was Katy Perry’s Sweet Treats from The Sims 3, and the odd H&M Fashion Stuff from The Sims 2. However, no pack has been as bold and divisive as the latest Game Pack for The Sims 4: Star Wars: Journey to Batuu.

As the name gives away, this paid DLC is the result of a collaboration between EA, Lucasfilm and Disney. However, rather than replicating the story of the Skywalker saga, the pack setting emulates the Star Wars theme park – Galaxy’s Edge – that is found at Disneyland and Disney World.

Sims can join and complete ‘missions’ for the First Order, the Resistance or Scoundrels, create their own lightsabers and droids and even meet Sim versions of iconic Star Wars characters such as Rey, Kylo Ren and Hondo Ohnaka.

Batuu itself is a vacation destination – so the player moves their Sim away from their home neighbourhood and lives within the Star Wars bubble for as long as they please. The player even has a separate currency (different to Simoleons) that are earned through completing tasks within the world. 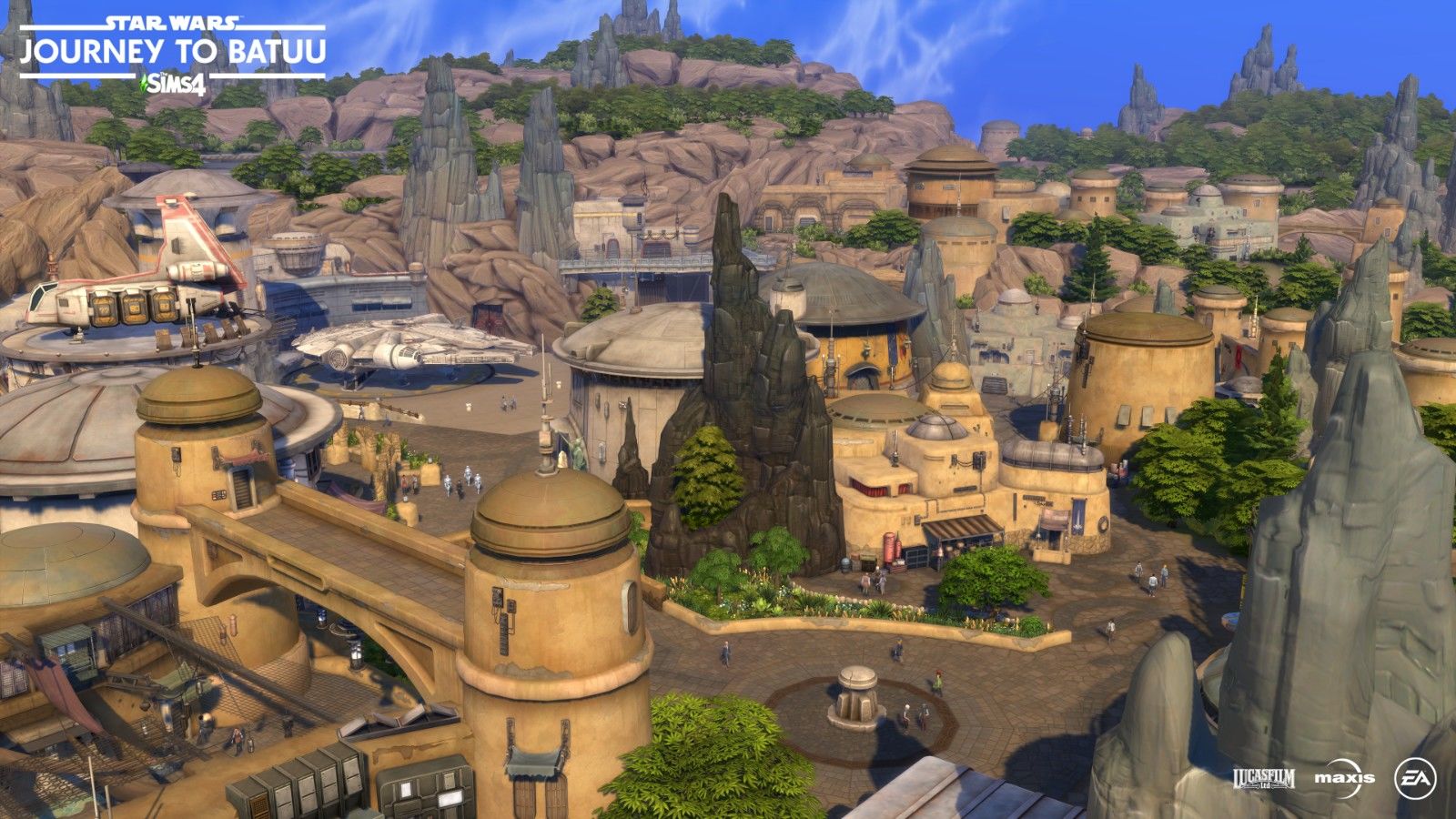 I cannot stress how different this pack feels to anything we’ve had before. The John Williams-esque musical score, the loading screens (which use the iconic wipe transitions), the quirky art style, and of course the in-depth references to Star Wars lore really make you feel as if you’ve taken a complete step away from the traditional Sims reality of the mundane.

Even the gameplay is quite different – as you’re sent on missions to complete tasks within the world, rather than the traditional free play. The tasks encourage you to explore the districts in Batuu more closely than you would within any other world, as you have to find items, sneak into bases, and even repair spaceships (which yes, you can fly and it’s rad).

However, that isn’t necessarily a good thing for every fan. As a Star Wars enthusiast, I enjoyed all the tributes and nods to the space opera franchise and knew which side I wanted to join and what items I wanted to hunt for. But if you’re a Sims player with no prior Star Wars knowledge you won’t have a clue what’s going on.

As an example, I was given a task to ‘scan a TIE Fighter’. Now, I know what that is because I’ve watched Star Wars. But to someone who doesn’t know the franchise? That could literally mean anything. You could be searching around the neighbourhood for an age before you finally find what you’re looking for. 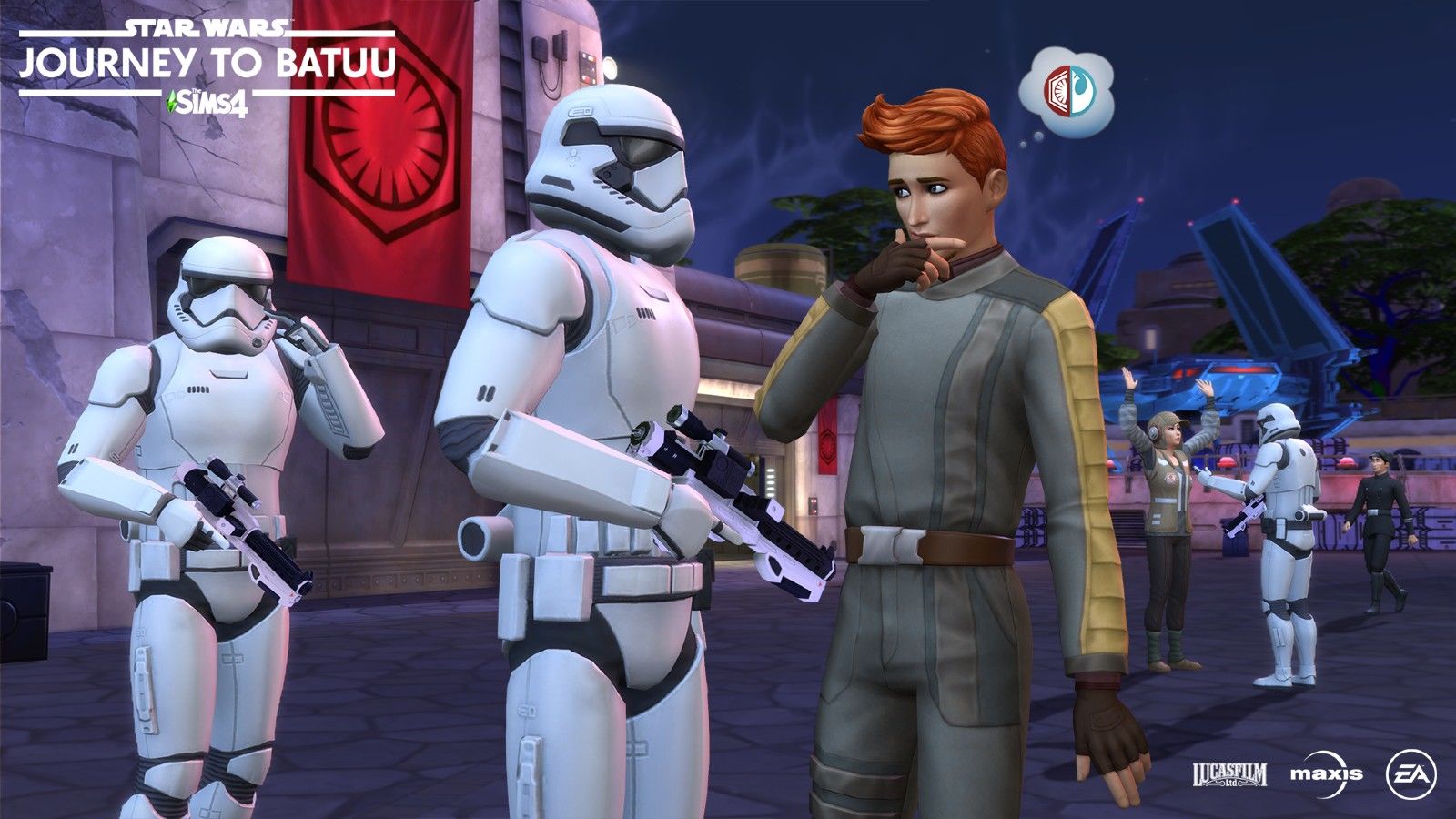 Going bold with the new pack has not sat well with the large community of regular Simmers. In fact, the official reveal trailer of Journey to Batuu is now the most disliked video on The Sims YouTube channel, and EA had to release a full-blown statement.

Don’t forget, this franchise’s core audience collectively voted for Nifty Knitting as a fan-driven Stuff Pack – they’re players who want realistic life simulation. Many Simmers have been asking for things such as cars, bunk beds, and more baby interactions for a long time – so a Star Wars pack is pretty left-field and not what fans were asking for.

The timing of this DLC is also a little unfortunate. The Sims team recently came under fire from multiple EA Game Changers and community members for not diversifying the number of skin swatch colours in Create-a-Sim. This has been an ongoing issue, and was the subject of a Change.Org petition with over 80,000 signatures.

Developer Sim Guru Lyndsay did release a video promising to rectify this issue – but releasing this pack so soon after that has left a lot of fans feeling as if their wishes have been ignored. Of course, The Sims team have obviously been working hard on this pack for a very long time behind-the-scenes and couldn’t have known that the reaction would be this polarising. 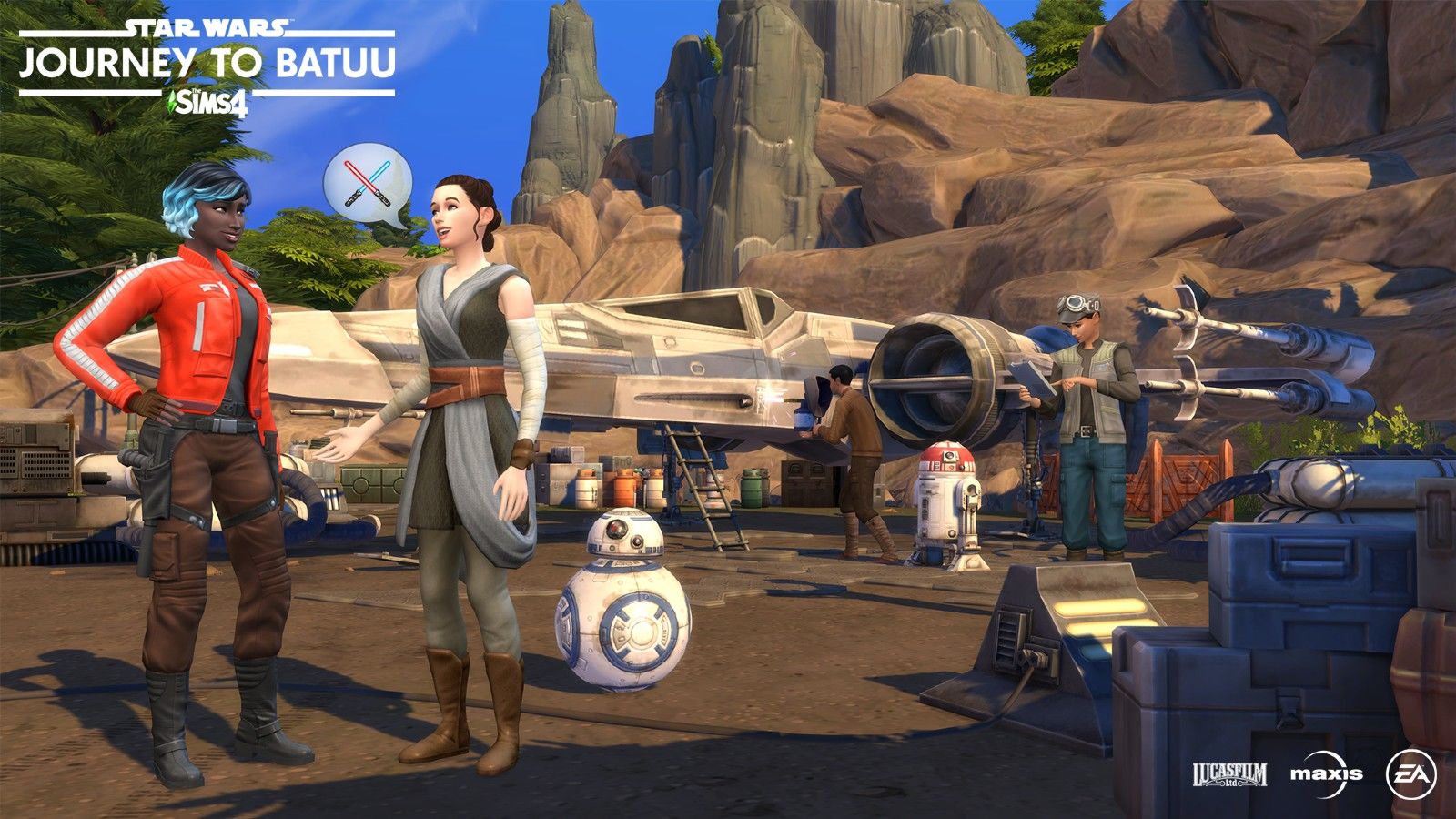 Their efforts and dedication haven’t gone unnoticed. The scenery within Batuu is one of the best I’ve seen from any neighbourhood, and the load times within this pack are much faster and better optimised than anything else within the game. The pack even goes into minute details, such as giving the Rey Sim an entire new British accent.

If a patch is released, the game does need to provide a little more instruction for missions within the factions. Even as a Star Wars fan, trying to find an item within a neighbourhood often took me a long time clicking around – so just an extra line or a pop-up paragraph to help players (especially younger audiences) along would be useful.

I won’t lie, I found myself hooked playing Journey to Batuu. However, I love the Star Wars franchise, and this is probably the closest I’ll ever get to visiting Galaxy’s Edge in the age of COVID (God, I miss travelling). I imagine that any player who isn’t a fan of the films will feel a bit lost playing this pack.

What Journey to Batuu does offer is an alternative introduction to The Sims for Star Wars fans. You could start off playing this pack just to meet Rey and get yourself a BB-8 of your own and end up wanting to explore more of what The Sims has to offer.

This is likely what EA is banking on – whether this will pay off or not remains to be seen. If it does, this collaboration with Disney could prove interesting. Perhaps we could see crossovers with Marvel, or other fairy tale recreations that also bring in new possible players. We may also see the reverse – Simmers trying out the EA Star Wars games.

Because of the scale of the backlash, I imagine the next packs that we see from The Sims team will be going back to the game’s roots of realism and staying clear of Millennium Falcons, lightsabers, and Ben Solo.

The Sims 4 Star Wars: Journey to Batuu is available to purchase now for £17.99/US$19.99 on Origin for PC, and will be coming soon to Steam on PC, Xbox One and Playstation 4. You can take a look at all the other Sims expansion packs here, and see why Sims is helping videogames change the world.

Cliff Richard, 79, admits thinking he 'wouldn't make it to 50' in surprise admission