Stephen Curry is one of the many NBA players who spent the formative years of his life playing a completely unrealistic videogame called “NBA Jam.”

There was something universal about how people behaved once they grabbed the controllers. It didn’t matter where they lived or how old they were or whether they would eventually become the greatest shooter on earth. What they had in common was the way they played the game. They did everything in their power to take as many 3-pointers as possible.

This was odd. In the actual NBA at the time, 3-pointers accounted for 8% of total points. But on any given “NBA Jam” machine, that number was between 50% and 52%, said Mark Turmell, the game’s creator. It turns out all those people were onto something: 30% of points scored in the NBA now come from 3-pointers, and that rate has steadily increased every single year for the last three decades.

The way the NBA reflects “NBA Jam” is uncanny but not unusual. So many of the innovations that have revolutionized professional sports in recent years are the same intuitive strategies that people have been using for as long as arcades have existed.

The most sophisticated front offices that use complicated proprietary algorithms to allocate their mountains of cash have come to a surprising conclusion about optimal strategies. The evolution of sports has led them right back to their childhood basements.

In 1993, the same year teenagers started feeding quarters into “NBA Jam” machines, NFL teams weren’t exactly known for their strategic innovation. At the time, 9% of offensive snaps came from the shotgun position, and only 54.9% of offensive plays were passes, according to Stats LLC.

There was always one group of people with a keen understanding of how backward NFL teams were. These people loved football and spent hours every day consumed by it. Except they were on their couches.

Anybody who has played the Madden videogame franchise instinctively knew how to be effective on offense: pass the ball.

Passing the ball averaged more yards. So did plays out of the shotgun. These gamers sensed that running the ball with your quarterback under center, to obey traditions that dated back to leather helmets and a time when the forward pass wasn’t even legal, was nothing short of lunacy.

Jordan Powell, a top Madden gamer, found himself exasperated whenever he turned on television and watched the NFL. The strategies he saw professional coaches implementing simply weren’t smart.

“It annoyed me,” says Powell.

NFL coaches are finally coming around. Passing in professional football now accounts for an all-time high 60% of plays. And that’s still lower than the 69% of Madden users, according to EA Sports data.

Powell is more encouraged by some of the other decisions he sees these days, like NFL teams going for it on fourth down and attempting more 2-point conversions, which might as well have been illegal a few years ago.

In one area, reality has surpassed virtual reality. Madden quarterbacks use the shotgun for 53% of plays in the game. NFL quarterbacks have used the shotgun on 63% of plays this year, and that has allowed quarterbacks like Patrick Mahomes to put up never-before-seen numbers in this record-breaking NFL scoring season.

The passing boom in the NFL has coincided with a scoring explosion in the NBA. The pace of basketball hasn’t been this fast since the mid-1980s, and it’s accelerated so much so quickly that the fastest teams a decade ago would be the slowest teams today. Not since the mid-1970s has the NBA seen this many points per game. And it’s not simply because there are more possessions. It’s also because offenses have never been as efficient as they are right now.

In a strange and unexpected twist, to understand today’s NBA, you almost have to study “NBA Jam.”

The average “NBA Jam” machine was remarkably consistent, Turmell said. In any given arcade, about 75% of total points came from dunks, layups and 3-pointers, the most valuable shots in basketball. That number in the real-life NBA is now up to 64%.

“NBA Jam” was beloved in part because it was absurd. And now the NBA has almost reached “NBA Jam” levels.

“’NBA Jam’ was ahead of our time,” said Nidal Nasser, a gamer for the Portland Trail Blazers’ team in the NBA 2K League, “and we didn’t even know it.”

In the 2015 version of “NBA 2K,” the videogame of choice for today’s NBA players, 34% of shots came from behind the 3-point line, according to the company’s data. The Warriors won the championship that year by shooting 31% of their field goals as threes. But then something funny happened the next season. As the 3-point attempt rate in “NBA 2K” dropped to 29%, Golden State’s increased to 36%. The Warriors were more futuristic than the videogame. 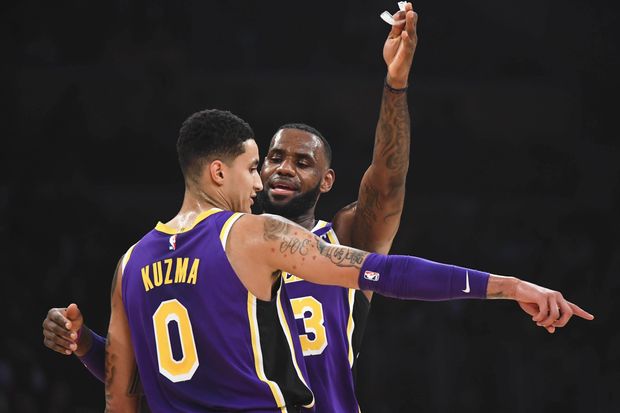 LeBron James and Kyle Kuzma learned how to play with each other in part by playing the NBA 2K videogame.

No less an NBA influencer than LeBron James became familiar with the Lakers by playing with them on “NBA 2K.” He even taunted his opponent for slipping underneath a screen and daring Lonzo Ball to shoot. He didn’t seem to mind that his opponent was a computer.

Not every NBA player tries to find strategic advantages when playing “NBA 2K.”

But that means it’s now a Lakers thing. James’s teammate Kyle Kuzma has become so serious about the craft of “NBA 2K” that he considers the hours he spends playing to be a form of high-level training.

The time he spends practicing videogames might be one possible explanation for the scoring outburst in the NBA this season. And one of the players off to the best start of his career is none other than Stephen Curry. He’s once again putting up silly numbers that aren’t supposed to exist in reality.

“I’ve never seen anything like this,” New York Knicks coach David Fizdale said. “Except on a videogame.”

Write to Ben Cohen at ben.cohen@wsj.com and Andrew Beaton at andrew.beaton@wsj.com

In a terrible time, games like Animal Crossing and Doom Eternal can help – Polygon

From pixels to perfection: the graphic tale of video games – Happy Mag