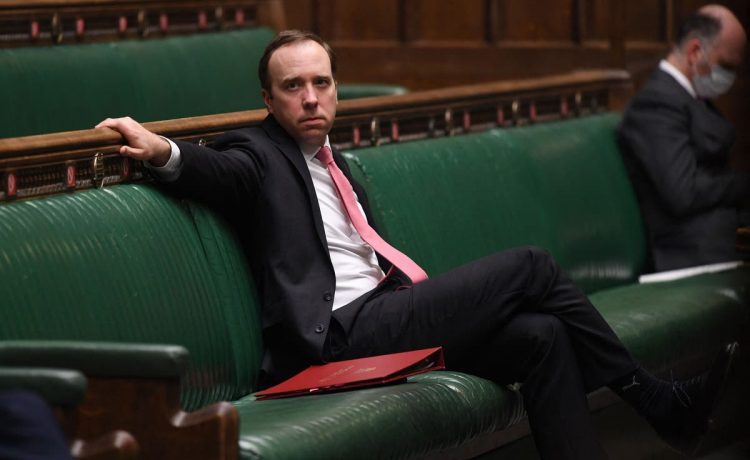 t was the kiss and fumble which cost a career – the resignation of Matt Hancock brought a curtain down in mortifying circumstances on a minister whose Tiggerish drive for a top job earned him friends and enemies – but who exuded ambition and self-confidence.

The saga of how the Health Secretary came to be secretly filmed groping Gina Coladangelo, a non-exec appointment in his department (and de facto aide) is yet to be untangled, along with the worrying implications of a security lapse which could allow it to go undiscovered.

But the early response was a slalom of messy and scrambling damage limitation. “Entirely personal” was the early response from Number 10 in an attempt to draw a line under the matter and keep Hancock in post. This backing was political rather than personal.

The PM had made dismissive comments about Hancock as “hopeless” revealed by Dominic Cummings. Hancock himself had often vented fury at being (as he saw) left to carry the can for decisions and omissions made in handling the pandemic. He was, as a close ally remarks, “there on sufferance by Boris” as a prominent Remainer who had swallowed the prorogation manoeuvre to get the Brexit withdrawal bill through parliament.

Johnson was initially adamant that Hancock should stay. It was backbench Tory MPs who delivered the coup de grace, infuriated by a mimsy semi-apology from Hancock in which he said: “I accept that I breached the social distancing guidance in these circumstances. I have let people down and am very sorry.”

Hancock’s conduct was dismaying. Politicians are human beings who stray and betray their marriages as frequently as anyone else. But an amorous dalliance conducted in his office, at a time when the rise of the Delta variant of Covid-19 is causing new jitters, looked too much like the latest iteration of an entitled “One rules for them…” behaviour by the government. It came on the back of criticism of lack of social distancing at the G7 summit in Cornwall.

The Prime Minister’s readiness to “draw a line” under a “personal matter” also felt peculiarly tone deaf. MPs made their feelings clear in a deluge of WhatsApp messages, and in calls to the party chairman Amanda Milling. Overnight , Number 10 fought back, on the grounds that losing a minister in the run up to a high profile by-election (Batley and Spen) later this week could rob the government of a Labour scalp. Johnson himself, no stranger to off-piste amorous activity, told staffers that Hancock had been the victim of an unfair sting. What’s more, he was also averse to giving Dominic Cummings the satisfaction of getting rid of a minister his apostate aide had targeted so squarely.

On Friday night and Saturday morning however there was a “Tsunami of protest” fielded by party officials who grew so concerned that they woke Johnson early to express concern that the matter might escalate and Johnson’s judgement would be found wanting. “He will have to go,” messaged one senior MP on the Brexit-rightwing of the party. “Better get on with it”. Hancock, initially confident he could tough it out, had come to the same conclusion after usually supportive colleagues on the moderate wing of the party had been lukewarm.

Team Johnson moved “swiftly to replacement thinking”. There was talk of bringing back Jeremy Hunt, the former Health Secretary, which would avoid the broader reshuffle Johnson was determined to avoid. But Johnson has always been suspicious of bringing back Hunt, who ran against him for the leadership and has demanded a return to the role of Foreign Secretary, which Johnson refused.

Michael Gove would usually rank as one of the few Cabinet ministers with the institutional knowledge and experience to deal with a role which coincides with the race to be NHS England’s new chief executive. That, says a senior source in the NHS “might have been a runner” had Cummings not revealed earlier mulling by the PM on replacing Hancock with Gove.

So Sajid Javid, who resigned over Number 10s interference in his office as Chancellor, emerged as the candidate who satisfied Boris’s criteria: he is undeniably smart, deemed a reassuring communicator and had not exacted public vengeance after the bust-up with Boris. Crucially, in terms of a party still internally riven by splits from the EU referendum, Javid, like Hancock is a Remainer.

“Cometh the hour, cometh the comeback,” joked one former Javid aide. The rescue job was, at least, slickly handled. But No10, as well as the ousted Health Secretary, has been dealt a blow by the backbenches, who have tasted power over political life and death.

Having acquired the taste for it, the Cabinet has been put on notice that when it comes to pratfalls, the PM is no longer the only voice determining whether they survive or fall.

Anne McElvoy is Senior Editor at The Economist