The hidden links between slavery and Wall Street 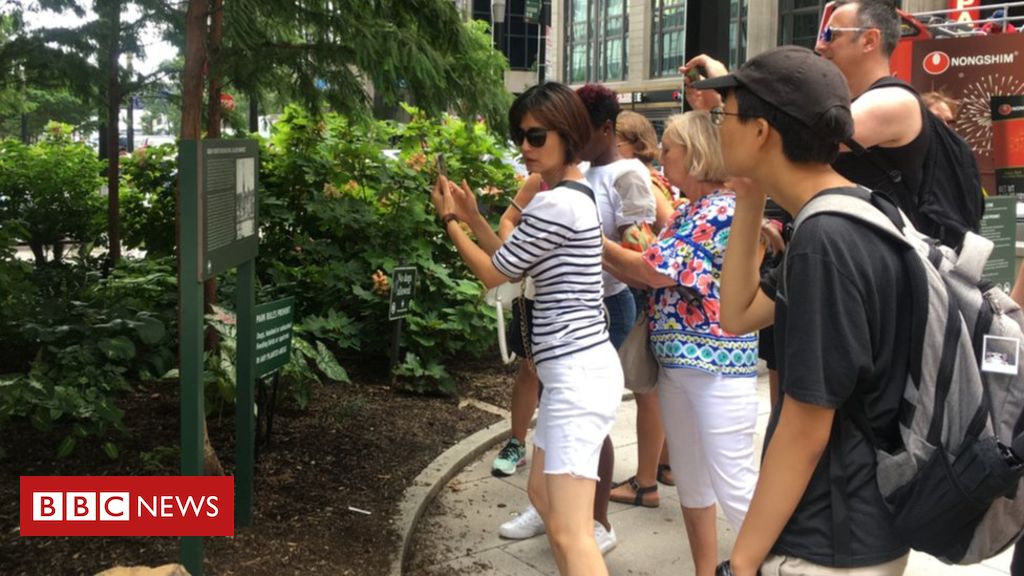 This month marks 400 years since enslaved Africans were first brought to what is now the United States of America. Slavery was officially abolished in the US in 1865, but historians say the legacy of slavery cannot be untangled from its economic impact.

On a hot August day, 25 people are gathered around a small commemorative sign in New York’s financial district. Their tour guide explains that this was the site of one of the US’ largest slave markets.

Just two streets away from the current site of the New York Stock Exchange, men, women and children were bought and sold.

“This is not black history,” says Damaris Obi who leads the tour. “This is not New York City or American history. This is world history.”

It is also economic history.

Stacey Toussaint, the boss of Inside Out Tours, which runs the NYC Slavery and Underground Railroad tour, says people are often surprised by how important slavery was to New York City.

“They don’t realise that enslaved people built the wall after which Wall Street is named,” she says.

By some estimates, New York received 40% of US cotton revenue through money its financial firms, shipping businesses and insurance companies earned.

But scholars differ on just how direct a line can be drawn between slavery and modern economic practices in the US.

“People in non-slave areas – Britain and free US states – routinely did business with slave owners and slave commerce,” says Gavin Wright, professor emeritus of economic history at Stanford University. But he says the “uniqueness” of slavery’s economic contribution has been “exaggerated” by some.

Slavery thrived under colonial rule. British and Dutch settlers relied on enslaved people to help establish farms and build the new towns and cities that would eventually become the United States.

Enslaved people were brought to work on the cotton, sugar and tobacco plantations. The crops they grew were sent to Europe or to the northern colonies, to be turned into finished products. Those finished goods were used to fund trips to Africa to obtain more slaves who were then trafficked back to America.

This triangular trading route was profitable for investors.

To raise the money to start many future plantation owners turned to capital markets in London – selling debt that was used to purchase boats, goods and eventually people.

Later in the 19th Century, US banks and southern states would sell securities that helped fund the expansion of slave run plantations.

To balance the risk that came with forcibly bringing humans from Africa to America insurance policies were purchased.

These policies protected against the risk of a boat sinking, and the risks of losing individual slaves once they made it to America.

Some of the largest insurance firms in the US – New York Life, AIG and Aetna – sold policies that insured slave owners would be compensated if the slaves they owned were injured or killed.

By the mid 19th Century, exports of raw cotton accounted for more than half of US oversees shipments. What wasn’t sold abroad was sent to mills in northern states including Massachusetts and Rhode Island to be turned into fabric.

The money southern plantation owners earned couldn’t be kept under mattresses or behind loose floorboards.

American banks accepted their deposits and counted enslaved people as assets when assessing a person’s wealth.

In recent years, US banks have made public apologies for the role they played in slavery.

In 2005, JP Morgan Chase, currently the biggest bank in the US, admitted that two of its subsidiaries – Citizens’ Bank and Canal Bank in Louisiana – accepted enslaved people as collateral for loans. If plantation owners defaulted on loan payment the banks took ownership of these slaves.

JP Morgan was not alone. The predecessors that made up Citibank, Bank of America and Wells Fargo are among a list of well-known US financial firms that benefited from the slave trade.

Prof Beckert points out that while cities like Boston never played a large role in the slave trade, they benefited from the connections to slave driven economies. New England merchants made money selling timber and ice to the south and the Caribbean. In turn, northern merchants bought raw cotton and sugar.

New England’s fabric mills played a key role in the US industrial revolution, but their supply of cotton came from the slave-reliant south.

Brands like Brooks Brothers, the oldest men’s clothier in the US, turned southern cotton into high-end fashion. Domino’s Sugar, once the largest sugar refiner in the US, processed slave-grown sugar cane.

America’s railroads also benefited from money earned through slave businesses. In the south, trains were built specifically to move agricultural goods farmed by enslaved people, and slaves were also used as labour to build the lines.

Some scholars even argue the use of slavery shaped modern accounting. Historian Caitlin Rosenthal points to enslavers who depreciated or lowered the recorded value of slaves over time as a way to keep track of costs.

More from the BBC’s series taking an international perspective on trade:

In the century and a half since slavery was abolished in the US, laws that prevented former slaves and their descents from full engagement in the US economy have shaped the country.

Following the country’s Civil War, efforts to pay reparations to the newly freed slaves were squashed. President Andrew Johnson, who took over after Abraham Lincoln’s assassination, did not want to alienate white southerners during the period of reconstruction.

A series of laws that economically and politically disenfranchised formerly enslaved people led to many of today’s inequalities, according to historians.

New efforts to find ways to pay reparations are finding traction in the 2020 race for president.

New Jersey Senator Corey Booker, a candidate for the Democratic nomination, has proposed a bill to set up a committee that would consider how reparations might be paid.

While politicians differ on how to address America’s legacy of slavery, historians agree that the proximity of the two markets is at least an indication of the connection between its economic legacy and its legacy of slavery.