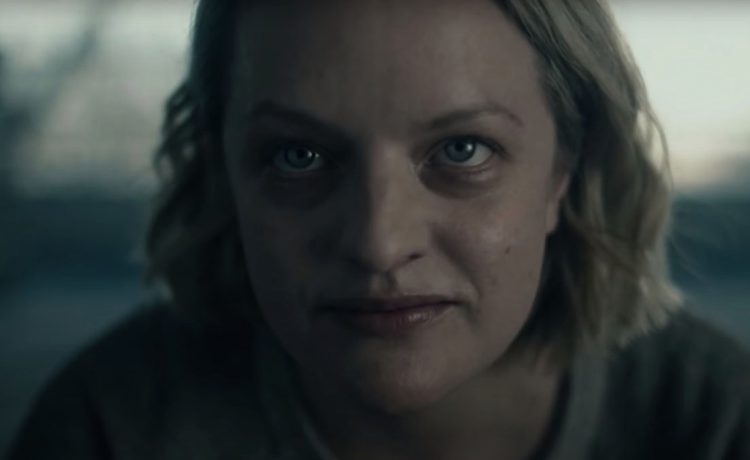 Face your enemy and you’ll feel better, June told Emily. It was the same message she’d given to fourteen-year-old Mrs Keyes at the start of the season. Emily faced Aunt Irene, the woman indirectly responsible for her own grief and mutilation. She refused her plea for forgiveness, and felt the high of victory when she took her own life. That was a fascinating turn from Kira Snyder’s script. Driving away from the sight of the Aunt’s hanging body, Alexis Bledel kept Emily’s reaction controlled. It was only when June prompted her that she admitted “I feel… amazing. I’m glad she’s dead. I hope I had something to do with it.” June was the midwife of that confession, and of the violent fantasies from the others that followed.

Speaking of midwives, who did June most resemble when she placed a chair in the centre of the circle, forced its occupant to tears and walked around conducting a choir of voices, saying she was only doing it to help? A brown wool coat and a cattle prod was all that was required to complete the look. Last episode, June’s self-descriptive speech about Serena drew an implicit connection between the two of them. This week, the subtext linked June to Aunt Lydia (remember Janine’s accusation in that milk truck?). By blurring the lines between its protagonist and her enemies, The Handmaid’s Tale is pushing June’s story somewhere knottily complex.

The same goes for her relationships with Luke and Moira, the two people who love her the most. June is openly hostile and combative with them both, pushing away Luke, rejecting real intimacy and trying to use sex as an avoidance tactic. Luke is clearly hurt by her rejection, and reeling after last episode’s assault. Will June sharing her shame at her last meeting with Hannah alleviate some of her self-disgust and help them to rebuild as a couple? Does the audience even want that for Luke right now?

Elisabeth Moss’s second episode as a director, ‘Testimony’ had the same emphatic feel as her first ‘The Crossing’. It was filled with signature dead-centre framing and unsettling, claustrophobic high angles. Nothing was understated, not the style, or the music – from the saturated strings that sound-tracked June on the witness stand, to the 90s trip hop opening and closing the episode, with the fitting warning: “We’re hungry, beware of our appetite.”

June may not have been sanctified by her pain, but she was illuminated with a halo during her testimony. Almost every other set but the courtroom in this episode, from Serena’s cell to Moira and Luke’s dinner table to Commander Lawrence’s home, had been obscured by darkness. In court, June quite literally stepped into the light, perhaps a symbolic reflection of her unburdening. It gave her speech a different feel to the rest of the episode. On the stand, she was an avenging angel, facing down the Waterfords with a controlled, condensed account of their crimes over the course of series one to three.

Crimes which – and this is so painfully realistic I laughed when I saw it – a whole chunk of people are willing to overlook because the Waterfords are their new favourite It Couple. That fan club scene was a deliciously hard-eyed look at celebrity, internet fandom, modern politics, and ultimately, how Gilead came to pass. It wasn’t just done with military might, the regime also needed to win people over, and despite everything, it showed that there are still people happy to be won over. Fred and Serena drunk in the adulation. They know how to play this now.