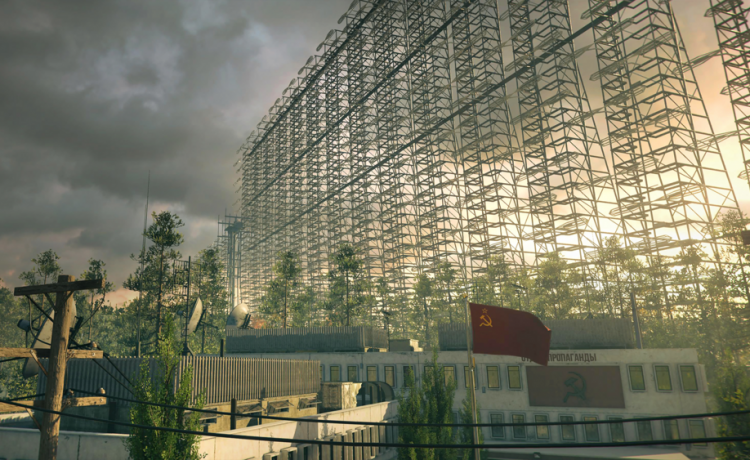 The first footage of Call of Duty’s new Warzone map has been revealed in a leaked live-action advert for the game’s next season.

VGC can confirm that the work-in-progress live-action spot, which was first shared by Twitter account On Thin Ice, is authentic and shows snippets of the new 1980s Warzone map which we understand will replace the current Verdansk at the end of the season, with an in-game event marking the transition on April 22.

It appears that the new map will be an evolution of Verdansk, rather than an entirely new design.

The leaked footage shows Cold War-era landmarks replacing Verdansk’s own points of interest, including an in-construction Stadium and an aqueduct replacing the Dam. Airport, TV Station and Downtown can also be spotted with a 1980s makeover.

However, some new locations can also be seen, such as a mineshaft area and what appears to be the Duga-2 Radar Array featured in Black Ops Cold War’s Ashes to Ashes campaign mission.

As first reported by VGC in February, at the end of Black Ops Cold War and Warzone Season 2, the battle royale game will finally transition to the new map.

The change will be marked by an explosive in-game event designed to narratively transition Warzone from the Modern Warfare era, to a setting more in line with the most recent premium series release.

Nuclear warheads recently uncovered on Warzone’s map will be used to trigger the revamp, similar to how Fortnite used an in-game event to transition to Chapter 2, with the zombies introduced in the latest season kicking off the countdown.

With another premium Call of Duty game due at the end of the year – which we understand is a new Sledgehammer title set during World War II – Warzone likely won’t see a similar revamp to coincide with that game until at least 2022, if at all.

It’s also very possible Warzone could skip WW2 altogether, in terms of a map revamp, and instead focus on coinciding with 2022’s game.

Next Gen Consoles at retail

Both Modern Warfare / Warzone and Black Ops Cold War share underlying technology and tools, but otherwise much of the engine used for Cold War can be traced back to 2015’s Black Ops 3.

Last year, sources told VGC that Activision had no intention of slowing down its premium Call of Duty releases, which will continue to be created under the leadership of Treyarch, Infinity Ward and Sledgehammer.

Warzone is viewed as a third pillar alongside Call of Duty Mobile and future full-price releases, which will continue to offer a ‘premium’ package of campaign, multiplayer and Zombies/Spec Ops modes going forward.

Given the huge popularity of the free-to-play game, combined with the rich history of the Call of Duty franchise, it makes sense for Warzone to continually evolve with content from each premium entry, rather than creating a different battle royale for each sub-brand.