The long-awaited fourth series of The Crown will document Princess Diana‘s meeting and eventual marriage to Prince Charles, along with the births and early years of the two Princes.

And, Emma Corrin, 24 – the actress who will play the Princess of Wales in the forthcoming season – says she got to know Princess Diana ‘like you would a friend,’ while discussing taking on the iconic role in a new interview.

The Grantchester star also revealed that she needed 10 people to help get her into the ‘massive’ replica wedding dress as she graced the cover of British Vogue. 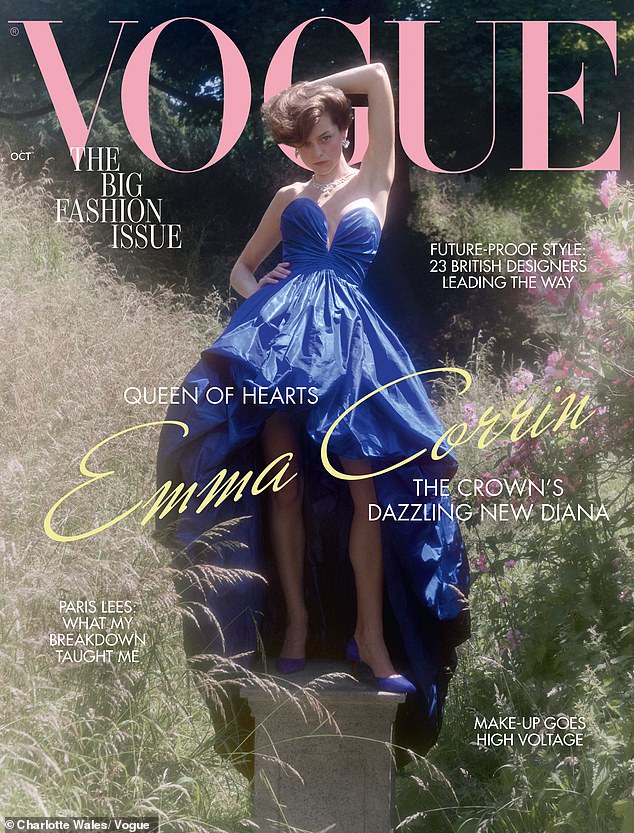 Playing an icon: Emma Corrin, 24, says she got to know Princess Diana ‘like you would a friend’ as she spoke about her role in The Crown while gracing the cover of British Vogue

Emma Corrin will portray Diana during the early part of her relationship with the Prince of Wales, before handing over the role to Elizabeth Debicki, for series five and six of the hit Netflix drama.

The Misbehaviour star explained how she developed a sense of ’empathy and understanding’ for the late princess.

She told the publication: ‘I feel I’ve got to know Diana like you would a friend. I know that sounds really weird, but I get a great sense of companionship from her.

‘I suppose, over time, you kind of start to patch together a sense of empathy and a sense of understanding. I love figuring people out.’ 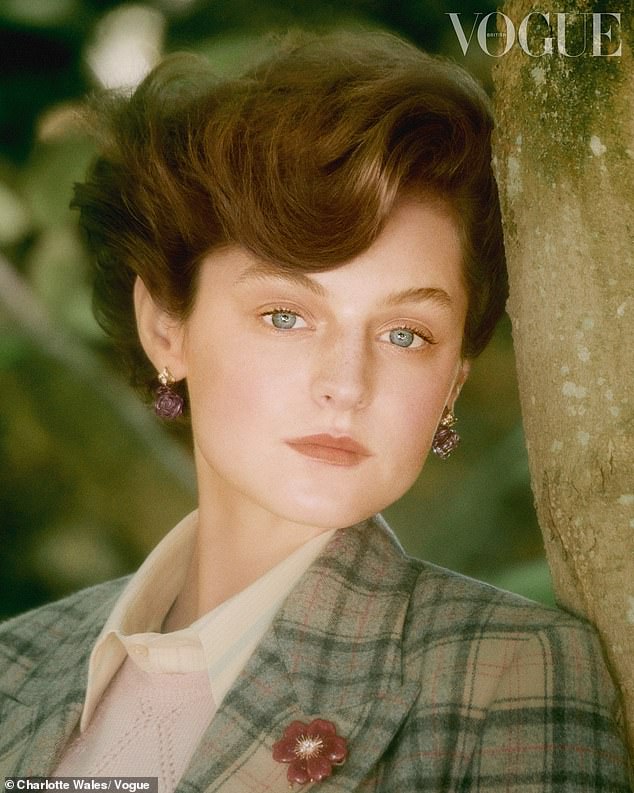 Empathetic: The Misbehaviour star explained how she developed a sense of ’empathy and understanding’ for the late princess

The young actress also recalled filming the first scene with Diana in her wedding dress, designed by David and Elizabeth Emanuel and featuring a 25ft train.

Emma revealed that she had needed 10 others to help her put on the replica gown, and that the crew went silent seeing her in it for the first time.

She told the magazine: ‘The Emanuels, who designed the original, gave us the patterns, and then it was made for me.

‘We were filming the scene when you first see her in the wedding dress – I think it was Lancaster House in London – and I had a team of about 10 people helping me put it on, because it’s massive.

‘I walked out and everyone went completely silent. More than anything else I wear in the series, it’s so… it’s her.’ 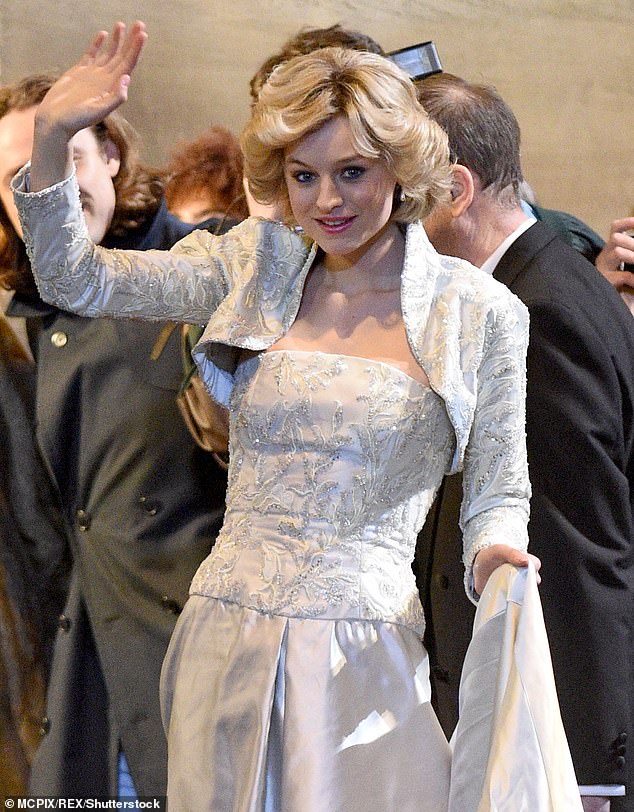 Fame: ‘I feel I’ve got to know Diana like you would a friend. I know that sounds really weird, but I get a great sense of companionship from her,’ said Emma (pictured as Princess Diana)

Emma also admitted that she had kept the role secret, but that some friends had correctly guessed her casting.

She said: ‘I didn’t tell anyone for a while. I love my mates but I think it would have got out.

‘My friends from school did this incredible thing, where they made me a scrapbook filled with all of the screenshots from our group WhatsApp, where I have said, ‘Oh my God, guys, I’ve been invited to read’.

‘Or a random conversation we’d had four years ago when I said, ‘Isn’t Diana amazing!’

The full interview with Emma Corrin is in the October issue of British Vogue, available on Friday September 11.

Emma took to Instagram on Monday to announce that she would be appearing on the cover of British Vogue.

Alongside the cover shot, she wrote: ‘Honestly lost for any words! What an honour. Thank you so much @edward_enninful and @britishvogue for having me on your October cover to join the incredible people who have come before me!

‘Very overwhelmed! Going to pour a big drink,’ before adding credits for the magazine feature and accompanying shoot. 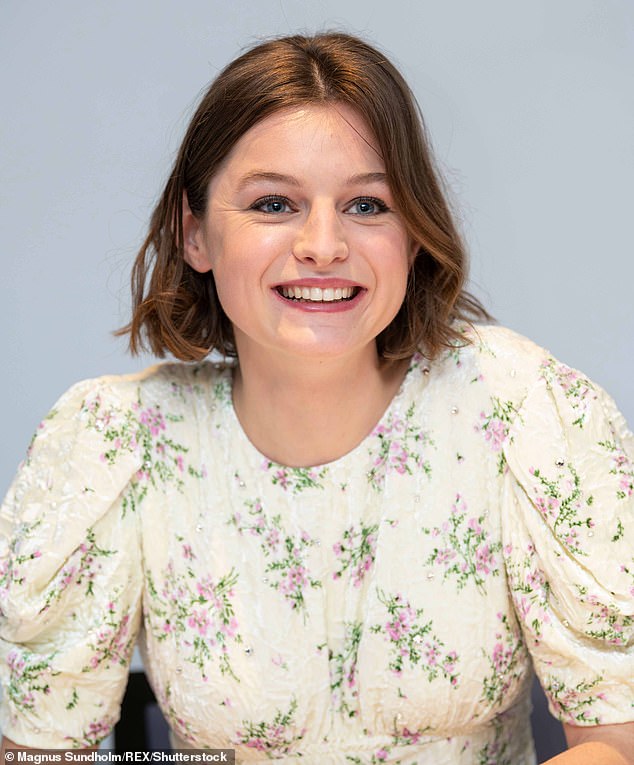 Keeping schtum: Emma also admitted that she had kept the role secret, but that some friends had correctly guessed her casting (pictured in March)

Emma’s casting was announced in April 2019, with The Crown’s creator Peter Morgan calling her ‘a brilliant talent who immediately captivated us when she came in for the part of Diana Spencer.’

‘As well as having the innocence and beauty of a young Diana, she also has, in abundance, the range and complexity to portray an extraordinary woman who went from anonymous teenager to becoming the most iconic woman of her generation.’

Grateful! Emma took to Instagram on Monday to announce that she would be appearing on the cover of British Vogue

The next series will be released later this year, but it was recently revealed that the show will conclude after its fifth season, with Imelda Staunton taking the throne as its final Queen Elizabeth II, while Lesley Manville has been cast as Princess Margaret.

They will replace Olivia Colman and Helena Bonham Carter respectively, who will bow out after the forthcoming fourth series.

Show creator Peter Morgan confirmed the Netflix drama would not include a sixth season while revealing Imelda, 64, will take the role ‘into the 21st century’.

This means that current Royal scandals including the allegations made against Prince Andrew as well as Prince Harry and Meghan Markle’s ‘Megxit’ drama won’t be featured on the Netflix hit.