The coronavirus cost of international duty – which clubs have been hit hardest? 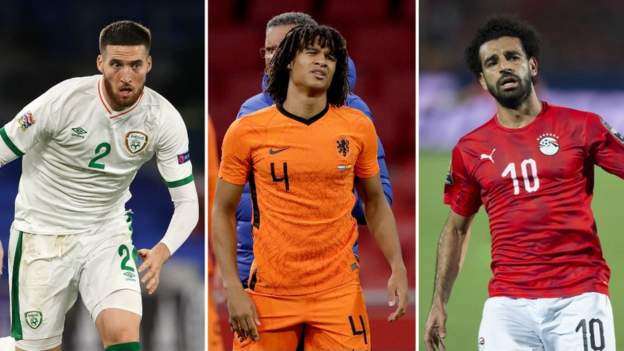 Premier League players picking up injuries while playing for their country is nothing new, but this international break could prove to be particularly costly.

The gruelling schedule combined with the coronavirus pandemic means a host of stars could be missing when domestic football resumes this weekend.

Who tested positive for coronavirus?

On Monday, the Premier League announced 16 positive results from 1,207 players and club staff tested for coronavirus between 9 and 15 November.

That is the most positive cases this season and the most since the league restarted in June. The previous high was 10 from 21-27 September.

The latest round of testing did not include those on international duty, with 439 fewer tests than the previous week.

On Wednesday, it was confirmed that Liverpool’s Mohamed Salah had again returned a positive test while on international duty with Egypt. He is one of seven players to test positive while away with their country.

Tottenham forward Son Heung-min had to quarantine in a hotel in Austria while away with South Korea, after six team-mates caught the virus.

Ukraine’s Nations League game in Switzerland on Tuesday was called off after three players tested positive for coronavirus, while Sunday’s match between Norway and Romania was cancelled after the Norway team had to quarantine.

Manchester United defender Alex Telles should be available for Saturday’s Premier League match against West Brom after testing negative while playing for Brazil. Earlier reports had suggested he had tested positive, but he was on the bench for Wednesday’s 2-0 win over Uruguay.

Chelsea forward Kai Havertz, Leeds striker Rodrigo and West Brom’s Branislav Ivanovic and Matheus Pereira tested positive for Covid at the start of November but should be able to return this weekend after completing a period of self-isolation.

In Spain, Atletico Madrid striker Luis Suarez is set to miss a reunion with Barcelona on Saturday after testing positive while away with Uruguay.

What have the managers said?

Managers face an anxious wait to find out if players test negative on their return to the clubs.

West Brom boss Slaven Bilic said Robinson, Ivanovic and Pereira had tested negative and should be available to face Manchester United on Saturday.

“We’ve had a few players who were positive, so they did not train for 10 days,” he said on Thursday. “For some of them [coming back from international duty], we are still waiting for the test results.

“You can’t plan ‘we are going to play like this’, with not having a Plan B or alternatives.

“It is not that it may happen; it is going to happen, unfortunately. It is basically that you just don’t have your starting XI, but your starting 16.”

Chelsea manager Frank Lampard says Brazil defender Thiago Silva could miss Saturday’s game at Newcastle (12:30 GMT) “because of the length of the journey and the timings” as he had only just returned from South America.

“We are still waiting on some Covid testing,” Lampard said. “Unfortunately some (players) are arriving back this afternoon, so with the 12.30pm kick-off, it brings a lot of challenges.”

Crystal Palace manager Roy Hodgson said midfielder Luka Milivojevic is isolating in Serbia and will be retested this weekend.

Fourteen out of 20 Premier League clubs have had players withdraw from international duty because of injury or Covid-19 over the past two weeks.

Liverpool are the worst affected, with defender Joe Gomez needing knee surgery after he was injured while training with England. He is “likely” to miss a “significant part” of the rest of season.

The Premier League champions are already without fellow centre-back Virgil van Dijk because of a long-term knee ligament injury,

Salah is likely to miss the next two games because of self-isolation rules, while captain Jordan Henderson is also an injury doubt after withdrawing from the England squad on Monday.

The last two international breaks have squeezed in three matches rather than the usual two.

For example, Harry Kane, whose Tottenham side began the season in the Europa League qualifiers, has played 20 matches for club and country – equivalent to half a Premier League season – across six countries in just 74 days.

Spurs boss Jose Mourinho revealed his thoughts about the international break in a sarcastic Instagram post Tuesday, just 24 hours after it emerged Doherty had tested positive.

England manager Gareth Southgate says players are under “huge pressure” from their clubs to limit playing time for their national sides to mitigate the risk of fatigue.

Premier League manager may be relieved to see there is not another international break until March, although that does not mean there is a let-up in fixtures.

Teams competing in Europe face a run of 11 games in six weeks between now and the end of 2020, not including the Carabao Cup quarter-finals scheduled for 22-23 December.

There have been growing calls for the reintroduction of the five-substitutes rule, which was used during Project Restart, to try and ease the burden on players.

The Premier League is the only major competition to return to three subs.

READ  Tokyo 2020: U-turn as hotels agree to wheelchair rooms for Paralympics
Share on FacebookShare on TwitterShare on PinterestShare on Reddit
newsgrooveNovember 19, 2020