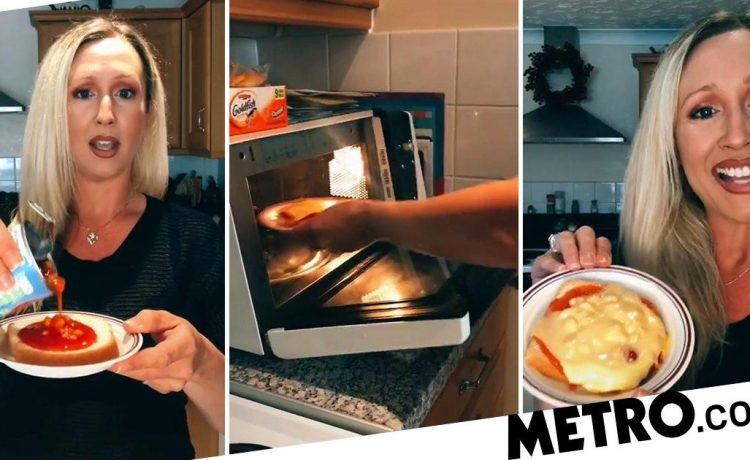 We Brits were horrified to see the American mum and daughter duo make a cup of tea (by make, we mean butcher) for their TikTok channel last month.

And now mum Michelle is back to aggravate Brits.

The American TikTokker has gone for another classic British staple: beans on toast.

Clearly not fond of tradition, Michelle – who actually lives in the UK (so should be aware of what’s sacred to us) – makes the much-loved dish without using a toaster.

Simply pouring a can of beans on the untoasted bread, Michelle then places a single slice of American cheese on top and leaves the monstrous creation in the microwave for a minute.

While most of us are partial to beans on toast for brekkie, we know that a traditional choice would include bacon, eggs, sausage, beans, tomatoes, hash browns, toast and mushrooms – and black pudding for the purists.

American cooking beans on toast in the UK #americanintheuk @nichole.caroline

In the video, Michelle starts by saying: ‘The first step is you wanna get your bread and then you wanna add the beans. I’m just gonna pour mine on like that, juice and all’.

Instead of toasting the bread and heating the beans on the hob, Michelle heats them up at the same time in the microwave, with cheese on top, which we imagine would make a soggy mess.

TikTokkers were not impressed by Michelle’s efforts.

One person commented: ‘YOU USE A TOASTER NOT A MICROWAVE. YOU USE HEINZ NOT OFF BRAND. YOU DONT USE CHEESE AND WHERE IS THE BUTTER’.

Another wrote: ‘She must be stopped. I would take away her microwave but I suspect that doing so would cause the entire household to starve’ while a third person said: ‘Yep she’s defo doing these on purpose now’.

For one person it was just too far. They wrote: ‘Unpopular opinion. do you not think some of the things you’re doing is being disrespectful to British culture and if it is a joke you should say so.’

Is this too far or just a bit of fun?

If you want to share a story with us, email metrolifestyleteam@metro.co.uk to tell us more.

MORE: Female TikTokkers share reality of life as a woman through ‘put a finger down’ challenge

MORE: Hawksmoor launches UK-wide delivery service so you can get steak brought to your door

READ  My daughter almost died when she was two… now I’ve launched a business to help save the lives of other kids with allergies
Share on FacebookShare on TwitterShare on PinterestShare on Reddit
newsgrooveJuly 2, 2020