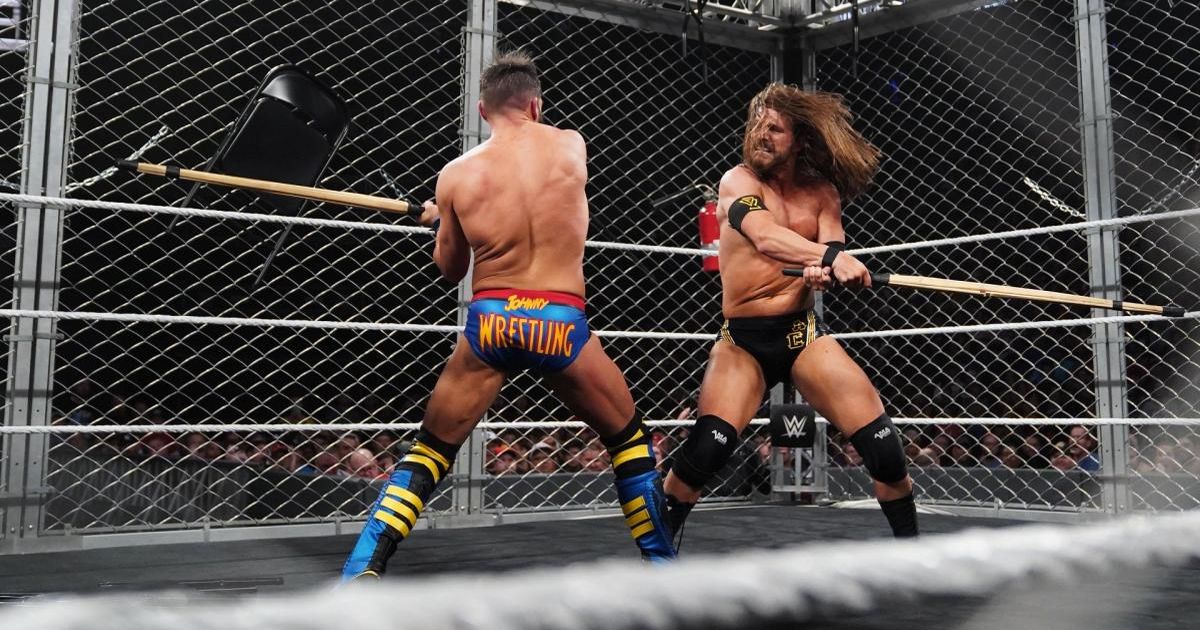 It’s been a standout year for WWE NXT with plenty of amazing matches from the black and gold brand in 2019.

The former developmental territory has evolved from a fan favourite one hour WWE Network exclusive to a live two hour weekly show on USA Network.

It now competes directly against the newly launched All Elite Wrestling: Dynamite and of late has been winning the ratings war against the upstart promotion.

The famous NXT TakeOver pay-per-views set the bar for professional wrestling and NXT has become the favourite WWE brand for many grappling fans.

Mirror Sport’s John Isherwood took on the tough task and picked out five of the most outstanding bouts from NXT over the last 12 months.

Throughout 2019, Johnny Gargano and Adam Cole defined NXT. ‘Johnny Wrestling’ has been the heartbeat of the company for several years and his coronation as NXT champion was a fitting moment at TakeOver: New York in April. His reign was short lived though and Adam Cole was the man to stop Gargano’s reign in heartbreaking fashion at TakeOver: XXV in June. Gargano and Cole contested some of the most highly rated matches in NXT history and this – their rubber match in Canada in August – may just be the best of the series.

Starting off with a classic grappling match, the two exchanged reversals and holds in a masterclass of mat wrestling, but Gargano was disqualified for striking Cole with a chair. They then turned up the pace in a street fight second fall, as Gargano forced Cole to submit with the Garga-No-Escape.

The two men shared the spoils at 1-1 going into a brutal weapons filled barbed wire steel cage match to wrap up this near hour long classic. The initial face off in the cage is one of the most striking images of NXT in 2019. Full of hard hitting moves, tables, chairs, weapons, submissions and more, Cole and Gargano’s third encounter in this series topped those that came before it.

Atop the cage, Cole and Gargano fell through a table and The Panama City Playboy picked up the win to retain his title and set up the real beginning of the Undisputed Era’s reign of gold in NXT – something which continues to this day.

Not just on this list because it was a history making match, but here for the quality of the action and the story that it told. This, the latest in the line of firsts for women in WWE, getting a chance to step into the double ring and cage structure created by the American Dream Dusty Rhodes, acted as a true showcase for two female talents, set up a feud between two others, and featured some of the most brutal action in the NXT Women’s division in 2019.

Prior to the match, Team Baszler member Mia Yim was taken out by a mystery assailant. After failing to make the squad in previous weeks, Dakota Kai stepped into the breach and when it came time for her entry into the match, viciously attacked her best friend Teagan Nox, leaving her unable to compete and then, adding insult to literal injury, walked out on the bout, leaving Rhea Ripley’s team at a two woman disadvantage.

Despite the odds being stacked against them, Ripley and Candice LaRae came through and a devastating Riptide to some chairs ended Shayna Baszler’s hopes of winning the first Women’s WarGames match.

Well worth watching not just for the against all odds story, but also to see the showcasing of Ripley, LaRae and NXT UK women’s champion Kay Lee Ray in such a prominent bout. The Scottish superstar was one of the matches MVPs and looks set to have a very successful 2020.

Shayna Baszler’s second title reign has been one of legend. Not quite beating Asuka’s iconic 500+ day undefeated streak, The Submission Magician’s second stint with the title did last more than 400 days during which the likes of Io Shirai, Candice LaRae, Bianca Belair and others fell to the Kirifuda Clutch.

When it looked like no-one could step up to the Queen of Spades, former NXT UK Women’s champion Rhea Ripley laid down her claim. As the Nightmare’s star rose quickly with her dominant performance at Survivor Series and career defining victory in the first women’s War Games match, it was inevitable that Ripley and Baszler’s paths would cross for the title before the end of the year.

As the new ‘Wednesday Night War’ with AEW continued to rage, Ripley and Baszler were put in the main event slot in mid-December and their match delivered not just one of the best women’s matches in NXT, but also proved a huge ratings winner. Whereas Baszler’s reign hadn’t gone stale, a change was due and Ripley was the one to facilitate this. Connecting with the crowd like no other female in the past few months, the 23-year-old Aussie was the right choice to head into 2020 with the gold around her waist.

After fending off the other NXT Horsewomen, Ripley hit a top rope Riptide to end Baszler’s mammoth reign and start a new chapter in WWE’s Women’s Evolution. With matches with the likes of Io Shirai, Bianca Belair, Mia Yim and others on the horizon, the women’s scene is refreshed again for Wednesday nights.

Lee and Dijakovic’s initial encounter gave the WWE Universe a taste of what these two outstanding big men could really do. However it was the kickoff to their later 2019 series of matches that really caught the eye of fans. With both men having suffered injuries after their initial encounter, a repeat of their highly acclaimed independent scene feud was put on hold. Keith Lee arrived in NXT with a lot of hype attached.

The big man was known for his outstanding athletic ability and magnetic charisma, yet failed to really get going in his early days. Maybe it was fate that he was to wait for the arrival of former independent scene foe Dijakovic to arrive in order to really kick start his career.

These two athletes can do things in the ring that many smaller superstars cannot even contemplate achieving and the pair put on a clash for the ages. Lee’s movement and pace completely defies what a man of his size should be able to do and much the same can be said for Dijakovic. A 300lb man, nor a 7ft tall powerhouse should be able to move with the grace of a cruiserweight, yet these two do just that.

The match lived up to the hype of those who knew what they could deliver and lit up the imagination of those Full Sail fans who weren’t aware of their past. Mixing both power moves and top rope offence, this was a pure spectacle from start to finish. From power moves such as Lee’s one armed slam on the apron, to a rope clearing Fosbury flop from Dijakovic, and the epic blockbuster top rope Spanish Fly, these two heavyweights put on a modern hybrid style wrestling match, which really made both stars in the eyes of fans.

It would be easy to point to Pete Dunne’s rematch with Walter in Blackpool, however, this encounter between the inaugural WWE UK Champion and the leader of Imperium was by far the better of the two bouts. This wasn’t your typical big versus little battle. The crowd knew full well that Tyler can mix it with the best of the big boys, however in the early running it was his speed that kept him away from the clutches of the Ring General.

Eventually the Big Strong Boy got his chance to show off his deadlifting ability and slammed the big man, yet Walter’s size advantage and dominance broke through, slowing the match down and putting him in control.

The 40-minute epic continued with Bate firing back up to hit some of the biggest power moves on the champion, including his aeroplane spin, burning hammer and eventually the Tyler Driver 97, all to no effect. With the crowd fully behind the gutsy competitor from the Midlands, Walter turned the match on its head and almost turned Bate inside out with a lethal lariat to finish the match

Even though the Austrian walked away with the title, Bate made viewers truly believe he could topple the giant. Even in defeat, he won over more fans than ever before.