The 2019 awards for sexism, outstanding narcissism and generally going to the dogs

Narrowing down a list of business folk on the basis of which is most pleased with themselves is perhaps the most onerous task for an awards committee. Even so, 2019 threw up some standout contenders and the judges highly commended two nominees: first, Ocado founder Tim Steiner, who mused: “None of the shareholders I have ever spoken to have said they resent anything I have been paid”; and second, fund manager Neil Woodford, who said after his removal from managing his own fund that the decision was one “I cannot accept, nor believe is in the long-term interests of LF Woodford Equity Income Fund investors”.

Churlish observers might counter that these responses either (a) suggested Steiner was too grand to engage with almost a quarter of the investors who had revolted over Ocado’s remuneration report, or (b) glossed over the pain and frustration followers of the “Oracle of Oxford” were feeling.

Still, one man trumped even Steiner and Woodford when it came to rating himself as the cat’s whiskers: Namal Nawana was practically invisible in the City until he quit as chief executive of healthcare group Smith & Nephew last October, but his profile soared once he grandly explained the decision. His $7m (£5.4m) a year package did not meet the expectations of a uniquely brilliant man running a UK-listed company. Priceless.

A surprisingly long shortlist for this new gong included a massive power cut at National Grid (blamed on lightning striking two power generators); struggling firms such as British Steel and Harland & Wolff being back in the headlines; plus the mooted re-nationalisation of some of the services of British Telecom (where, under public ownership, customers used to have to wait months to have a phone line connected, but complaining about this was tricky).

Still, the judges alighted on the Labour idea to cut the length of the working week to 32 hours which – while a radical policy that actually has some backing from right- and leftwing thinktanks – immediately brought back memories of the three-day week under the Tory government in 1974.

Crucially, it also gave the judges the opportunity to trot out the cricketer Denis Compton’s famous crack when learning about Ted Heath’s move. “I am not going to work an extra day for anybody,” he said, which perfectly sums up the judging panel’s attitude to graft.

The Wile E Coyote statue for not seeing that one coming

This was another feverishly contested category, with the usual entries from economists who called the economy wrong, City analysts who advised their clients to buy shares that slumped, and opinion pollsters who … well, that one is still a tad raw. But in the City there were two standout entries for businesses that failed to foresee the rather painful denouements they were hurtling towards.

First was Mike Ashley, billionaire founder of the retailer formerly known as Sports Direct, who warned in July of the small matter of the group being hit with a bombshell €674m tax bill from the Belgian revenue authorities.

Still, that was not enough to win. This year’s Wile E Coyote goes to the directors of Thomas Cook who, despite peering over the precipice into the ravine of the travel group’s balance sheet, ignored opportunities to persuade shareholders into backing a decent-sized rights issue to take a chunk out of its debt pile (which eventually surpassed £1bn).

This proved a painful oversight. By September, Thomas Cook had fallen off the cliff.

The Richard and Maurice McDonald golden arch for ousted founders

The axing of the founder of a business has provided some of the greatest narratives in commerce: think Steve Jobs at Apple, Richard and Maurice McDonald of the eponymous fast food chain and JR from Ewing Oil. It is the stuff of light-entertainment gold.

This year produced a bumper crop too with, among others, Adam Neumann going from WeWork, Woodford from Woodford and Ray Kelvin from Ted Baker.

But despite all of these stellar examples, the judges plumped for a founder who seemed to have made it his life’s work to get ousted from his life’s work: Metro Bank creator Vernon Hill, who irritatingly insisted on shoving his beloved Yorkshire terrier into every corporate photoshoot. Anyway, after a run of crises at the bank that seemed to stretch back to the Morecambe and Wise Christmas specials, Hill finally agreed to step down in October, leaving shareholders to hope that the tales of corporate underperformance and idiosyncratic decision-making are now the stuff of Christmases past.

This one had a shortlist of one. Jeff Fairburn’s £75m bonus at Persimmon when chief exec of the building group is infamous. But in December an ugly twist was revealed. Some of the homes the company was building in the bonus-accumulation period were affected by a “systemic nationwide failure” to install the correct cavity barriers to stop the spread of fire. The committee felt no further discussion was required.

Men have proved themselves such universally deft managers of companies that the City’s boardrooms have always fretted that introducing some semblance of gender balance might prove too courageous a move.

So collectively, this year’s winners are the companies that make up the blue chip index of the UK’s most valuable firms – the FTSE 100 – for their efforts in staving off for yet another year of the fearful prospect of having more than a handful of women running top businesses.

During the year it was announced that Véronique Laury, chief executive of DIY retail chain Kingfisher, was off, while Alison Cooper is to stand down as chief executive of tobacco giant Imperial Brands after nine years (although she remains in post). The number of female chief executives running FTSE 100 firms had a boost in November when Alison Rose started as boss of the Royal Bank of Scotland, bringing the current count to six (and half of them are called Alison).

However, if you think that total is woeful, console yourself with the strides made in 2019. Laury’s departure was announced as Kingfisher revealed a drop in profits along with planned store closures, proving that businesswomen can be equally as useless as their male counterparts.

READ  Ted Baker needs a saviour. Could that be its founder?
Share on FacebookShare on TwitterShare on PinterestShare on Reddit
newsgrooveDecember 29, 2019 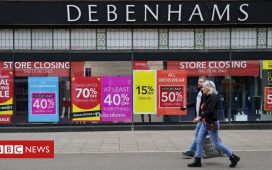