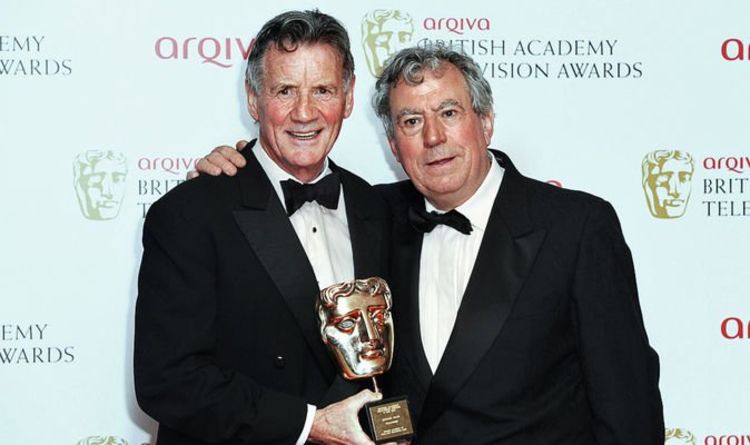 But he saves his laughter for jokes he wrote himself, says fellow Python Michael Palin.

Admitting that it was now only “a matter of time” before he died, Palin told yesterday how he still visits him although his friend does not recognise him.

Jones, now 77, was diagnosed with dementia four years ago.

Speaking on Radio 2, Palin, 76, revealed the comedian and writer’s condition had deteriorated.

Asked about Jones’s health, Palin replied: “Well, not terribly well – the kind of dementia he has is not something that can be cured particularly.

“It’s just a matter of time. I go and see him, but he can’t speak much, which is a terrible thing for someone who was so witty and verbal and articulate and argued and debated and all.”

But he revealed: “The other day I did take a book that we’d written together in the 1980s called Dr Fegg’s Encyclopaedia Of All World Knowledge which was sort of an anarchist children’s book and I read some of it – the things we’d written together – and amazing, because Terry suddenly smiled and began to laugh.

“But the key thing was that he only laughed at the bits that he’d written.

“I thought – that shows that something is ticking over!”

Monty Python have been celebrating 50 years since the comedy troupe’s launch.

Jones was responsible for writing much of their material, and directed the films Monty Python And The Holy Grail, Life Of Brian and The Meaning Of Life.

He is also a prolific children’s author and well-respected medieval historian.

Jones has been married to his second wife designer Anna Soderström, 41 years his junior, since 2012.

The couple have a 10-year-old daughter, Siri.

READ  Piers Morgan: GMB host on ‘uncomfortable realisation’ as he admits wife has ‘a go at me’
Share on FacebookShare on TwitterShare on PinterestShare on Reddit
newsgrooveNovember 30, 2019