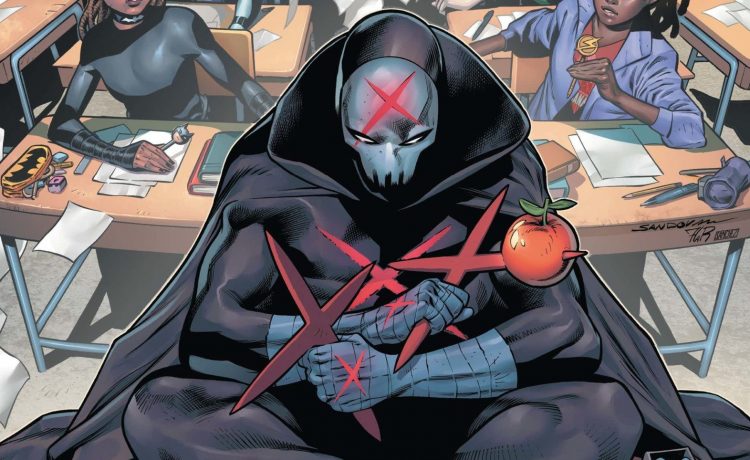 The positioning of Dick Grayson played a big part early on in the creation of the story.

“In the very beginning, [DC senior editor] Mike Cotton said, ‘Let’s do something to Dick Grayson. Let’s have him lose an eye, or something that’s really messed him up.’ The first thing I said was, ‘So are we making a parallel to Deathstroke, then?’ And he said, ‘Oh, I hadn’t really considered that.’ But that’s what led me down the road of thinking what happens to Dick Grayson if things have gone so bad that he turns to another mentor and the way that Bruce was a mentor for him? And what if it’s Slade? What does that mean for Dick in the future? But then the Batman group said, ‘Hey, you can’t have him lose an eye, what are you doing?’ So it’s a great big collaboration, with editors from different angles of the DC Universe working out those details.”

Aside from Dick’s turn to the Slade-side, one of the most exciting announcements coming out of DC’s Future State and Infinite Frontier is the debut of a familiar anti-hero we’ve somehow never seen in the pages of a DC comic before. Red X has made the jump out of the Teen Titans cartoon and straight into Future State: Teen Titans and the upcoming Teen Titans Academy ongoing series. Like many of us, Sheridan was shaped by the iconic Teen Titans animated series, so to be the one heralding Red X into the comics is almost too good to be true.

“My career is built around animation, that’s where I started. I have never had a chance to work on a show with Glen Murakami, but I’m such a fan of his Teen Titans show. It informed a lot about who I am as a writer and as a fan,”  Sheridan says. “I’ve gotten to meet him to kind of work with him a little bit, but not on a show. And he’s an incredible talent. And the writers from that series were just incredible.”

So why did Sheridan choose Red X specifically for his run?