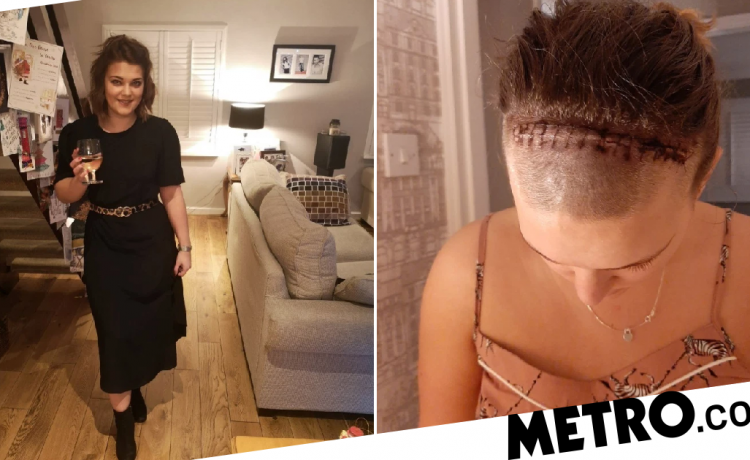 A teacher is returning to work just four months after having life-saving surgery to remove a brain tumour.

Lucy Gallagher was taking a class last November when her vision began to fade and her whole left side went numb.

The religious studies teacher, from Chorley, was rushed to hospital and a CT scan revealed a tumour on her brain.

Just days after the incident, the 29-year-old underwent emergency surgery and, during the course of the two and a half hour operation, medics managed to remove the entire growth.

She said: ‘My face was incredibly swollen after surgery and I couldn’t open my eye.

‘I spent a week in hospital and the worst thing was not being able to have any visitors.

‘On one occasion, my mum dropped some things off for me and I heard her voice outside in the corridor but I wasn’t allowed to see her. It was really hard.’

Lucy explains that she struggled with headaches for a while before her diagnosis, but never thought anything of it.

She added: ‘I have suffered from migraines for years but they were always put down to having a busy, stressful job.’

By the end of the month, Lucy had returned home from hospital and her recovery was so speedy that she was ready to go back to work in January.

However, the third national lockdown and partial closure of schools threw a spanner in the works.

She said: ‘I was signed off work for the rest of the term and I had the Christmas holidays to recover too.

‘I had prepared to come back to school in January but then the Prime Minister announced that schools would be partially closed due to the COVID-19 lockdown, so I stayed at home teaching students remotely.’

After a two-month stint of teaching classes from home, Lucy has now returned to school properly – just four months after her surgery.

She said: ‘When schools reopened to all pupils earlier this month, I returned at the same time but on a reduced timetable.

‘I can’t walk very far or stand up for long periods of time.

‘I feel very lucky to have extremely supportive employers and the kids have been great too.

‘I’ve been very open about my diagnosis and told them what happened and even showed them photographs of my scar.

‘They kept saying, “miss, are you alright?”, so I wanted to put them at ease. They’ve all been really caring and respectful.’

Following her shock diagnosis, Lucy is keen to raise awareness around brain tumours and has even organised a Wear A Hat Day at Essa Academy, to coincide with the national Brain Tumour Research event.

Lucy said: ‘I’m passionate about spreading the key messages surrounding brain tumours and I’ve given an assembly on the topic to help raise awareness among the school community.

‘I’ve been really lucky, as the surgeon managed to get 100% of my tumour.

‘Just 1% of the national spend on cancer research has been allocated to this devastating disease, and I’m very aware that not everyone is as fortunate as I am.’


MORE : Man pleads for ethnic minorities to sign up for stem cell donations as sister fights for life


MORE : Woman born with no womb and a 2cm vagina says she has learned to accept her body


MORE : Lockdown isn’t just boring, a year of it could have altered our brains