Taylor Swift has disclosed her experiences with an eating disorder in a new documentary. In Taylor Swift: Miss Americana, which received its premiere at the Sundance film festival last night, Swift says that she would starve herself to the extent that she felt as if she might pass out during live performances.

The 30-year-old star said she would make a list of everything she ate, exercised constantly and shrank to a UK size two; she is now a size 10. “I would have defended it to anybody who said ‘I’m concerned about you,’” she tells the film’s director, Lana Wilson.

“I don’t think you know you’re doing that when you’re doing it gradually. There’s always some standard of beauty that you’re not meeting. Because if you’re thin enough, then you don’t have that ass that everybody wants, but if you have enough weight on you to have an ass, then your stomach isn’t flat enough. It’s all just fucking impossible.”

Swift says in the film that she now fights the urge to be critical about her body – “because it’s better to think you look fat than to look sick” – and avoids looking at images of herself. “I tend to get triggered by something, whether it’s a picture of me where I feel like my tummy looked too big, or someone said that I looked pregnant or something. And that will trigger me to just starve a little bit, just stop eating.”

She recalled receiving praise for fitting into sample sizes on photo shoots. “And I looked at that as a pat on the head. You register that enough times, and you just start to accommodate everything towards praise and punishment, including your own body.”

Swift told the magazine she had come to realise that “if you eat food, you have energy, get stronger, you can do all these shows and not feel [enervated]”, and cited the body image activist and actor Jameela Jamil as an influence on her recovery. “I swear the way she speaks is like lyrics, and it gets stuck in my head and it calms me down.”

It is the first time that Swift has talked candidly about her experiences with an eating disorder. In an essay for Elle magazine on the 30 things she learned before turning 30, published in March 2019, she said she had “learned to stop hating every ounce of fat on my body”.

She wrote: “I worked hard to retrain my brain that a little extra weight means curves, shinier hair and more energy. I think a lot of us push the boundaries of dieting, but taking it too far can be really dangerous. There is no quick fix. I work on accepting my body every day.”

Also in the documentary, Swift admits that she regrets not speaking out against Donald Trump during the 2016 election, and goes against her father Scott Swift’s wishes by publishing a statement decrying the Republican Senate candidate Marsha Blackburn during the 2018 midterm elections.

Visibly upset, Swift says: “I can’t see another commercial [with] her disguising these policies behind the words ‘Tennessee Christian values’. I live in Tennessee. I am Christian. That’s not what we stand for.”

Her father responds: “I’ve read the entire [statement] and … right now, I’m terrified. I’m the guy that went out and bought armoured cars.” When her publicist, Tree Paine, warns Swift that Trump might come after her, she responds: “Fuck that, I don’t care.”

The documentary details Swift’s disentanglement from her lifelong wish to be seen as a “good girl”. She says: “I’ve been trained to be happy when you get a lot of praise … Like, those pats on the head were all that I lived for. I was so fulfilled by approval that that was it. I became the person everyone wanted me to be.”

She also discusses the impact of her mother Andrea Swift’s cancer diagnosis on her values: “Do you really care if the internet doesn’t like you today if your mom is sick from chemo?” Swift recently told Variety that her mother had been diagnosed with a brain tumour, which informed her decision to tour her 2019 album, Lover, at limited 2020 festival dates rather than embarking on a full stadium tour. “I wanted to be able to work as much as I can handle right now, with everything that’s going on at home.”

Wilson described her film as a “feminist coming-of-age story that I personally connected with, and that I really think women and girls around the world will see themselves in.”

Taylor Swift: Miss Americana is streaming on Netflix from 31 January.

Coronavirus could cause brain infection ‘that alters your mental state’, doc warns

UN secretary general: recovery from the coronavirus crisis must lead to a better world | António Guterres

‘Don’t stay at home if you can’t breathe’

How does Britain get out of the bunker if the coronavirus curve flattens? 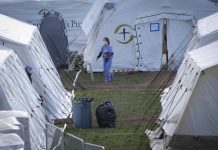 Trump says China's coronavirus numbers seem 'on the light side'