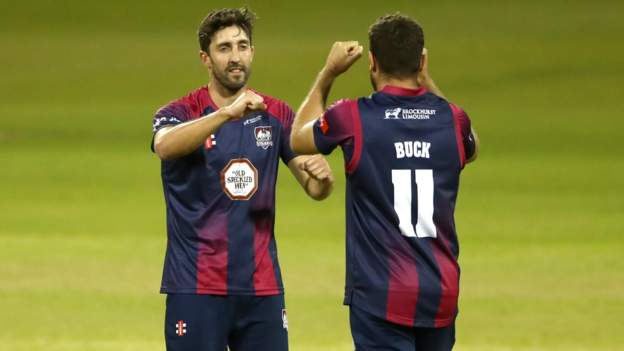 Northamptonshire Steelbacks maintained their cracking start to the T20 Blast as they comfortably beat Birmingham Bears to claim a third straight win.

Having become the first side to win three games in the delayed competition, Northants are now in command on top of Central Group, four points clear.

Somerset, who earned their first win, are their nearest challengers.

Sussex, Kent and Hampshire sit one, two and three at the top of South Group, having all enjoyed victories too.

But the performance of the night was the Steelbacks’ 38-run win over a Bears side containing one of their former players, fit-again England paceman Olly Stone.

The ease of unbeaten Northants’ victory did not look so likely when they stood 135-7 in the 19th over, but Nathan Buck pulled Henry Brookes over midwicket for six, then steered Stone wide of third man for four to lift his side to 158-7.

Then, with the Bears on 26-0, Buck removed both openers Ian Bell and Ed Pollock in the fourth over to claim a very rare double-wicket maiden – and the visitors simply never recovered, bowled out for just 120 in the final over to suffer their first defeat.

“We maybe wanted a few more,” said Northants all-rounder Graeme White, who took 2-28 with his spin to add to his earlier handy 10 off nine balls. “But I know how good a group of bowlers we’ve got here and I was slightly more confident than a lot of people.”

Young Devon seamer Ben Green took 4-26 on only his third appearance and Josh Davey 2-17 as Glamorgan were restricted to 133-8, of which captain Chris Cooke again top-scored with 42.

Home captain Tom Abell then led the way with an unbeaten 74, backed by James Hildreth’s 34 not out as Somerset steamed home.

Sussex are now top of South Group with two wins from three and a rain-off after David Wiese’s unbeaten 79 helped beat Middlesex by three wickets in a thriller at Lord’s.

After slumping to 67-5, he hit three sixes and eight fours to reach their victory target of 166 with four balls to spare, having survived a catch off a James Harris no-ball in the process.

Earlier, Stevie Eskinazi had hit 79 as Middlesex made 165-5, the second biggest score of the day’s five games but still only second best on the night in St John’s Wood.

T20 Blast holders Essex will not be feeling too panicky after suffering their first Twenty20 defeat in almost 13 months.

They won just one of their first five games in 2019, and only five of their 14 group games altogether (of which four were rained off) as they came with a late run to sneak a quarter-final place, before burgling their way to Finals Day – and then rising memorably to the occasion.

This time round, after starting with a South Group rain-off with Middlesex, followed by Sunday’s tie with Surrey, they did not post quite enough, 139-6 against Hampshire.

With 10 balls left, Hants still needed 14 – but Joe Weatherley and James Fuller kept their cool to earn a five-wicket win with a ball to spare.

Heino Kuhn marked his first innings as a new dad with a match-winning 42 not out from 31 balls to earn Kent their first South Group win against Surrey.

Earlier, Kuhn’s fellow South Africa international Hashim Amla (75) and England opener Rory Burns returned to form with his highest T20 score, 56 not out, to help Surrey recover from 28-3 to reach 161-4.

But Kuhn, who became a father for the first time when his wife gave birth to a baby daughter last week, marked his return from paternity leave in style.

He hit four boundaries as he and Grant Stewart put on an unbroken 48 for the sixth wicket to rescue Kent, the other still-unbeaten side in South Group, from their own mid-innings wobble.