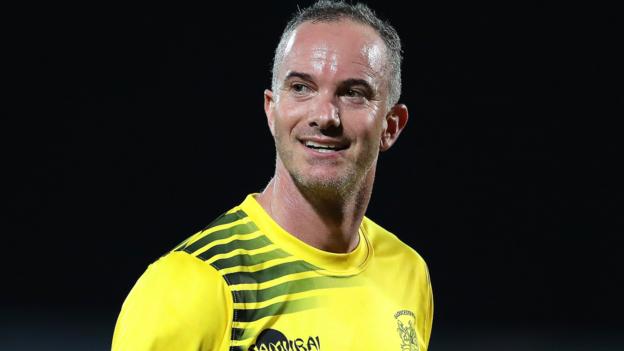 Michael Klinger’s 102 not out off 65 balls saw Gloucestershire progress to the knockout stages of the T20 Blast as they beat Kent by five runs.

Second-placed Gloucs scored 180-3 before restricting the third-placed Spitfires to 175-8 at Canterbury.

Elsewhere and Essex and Hampshire kept their hopes of qualification alive with wins over Surrey and Middlesex.

Yorkshire moved off the bottom of the North Division with an 80-run victory over Northamptonshire.

Any one of Kent, Somerset, Hampshire, Middlesex or Essex could take the final two places in the quarter-finals after Friday’s last round of group matches.

In his final season the 39-year-old Australian skipper Klinger ensured his Gloucestershire side progressed as he blasted four sixes and nine fours as the visitors set themselves a decent platform at Kent.

In reply Kent were reduced to 18-2 in the third over before Faf du Plessis and Sam Billings came together and formed an excellent partnership, putting on 122 runs in just under 12 overs.

When skipper Billings went for 55 off 40 balls having struck three sixes it looked as though Kent would have the game wrapped up with the hosts needing just 40 runs off the final five overs.

While du Plessis (60) stuck around until the final ball of the penultimate over, his teammates failed to support him, despite getting to a situation where they needed just 12 runs from the last nine balls.

Ryan Higgins struck with successive balls towards the end of the penultimate over to end with figures of 3-36 as he dismissed du Plessis and Alex Blake (19).

READ  Buccaneers new uniforms a tribute to the past

Ollie Robinson and Hardus Viljoen lost their wickets in the final over, and with number nine Mitchell Claydon needing a six off the last ball he swung and missed to ensure a Gloucestershire win.

Bopara and ten Doeschate save Essex

When Essex were reduced to 10-2 off 2.1 overs few would have thought they would have had a chance of putting on a competitive score, let alone coming away with a 19-run win over Surrey at The Oval.

But a fifth-wicket stand of 117 from Ravi Bopara and Ryan ten Doeschate ensured the Eagles not only posted a competitive score of 186-5, but also kept their slim hopes of a top four finish alive.

Former England player Bopara needed just 35 balls to score his 70 not out as he hit four sixes and four fours, while Dutchman ten Doeschate hit 55 not out off 44 balls.

Surrey lost wickets at regular intervals in their reply – their star-studded top three of Aaron Finch (12), Mark Stoneman (8) and Sam Curran (8) failed to fire as they were reduced to 29-3 – all three were victims of Jamie Porter who ended the innings with figures of 4-38.

The middle order did their bit to keep the host in it as Ollie Pope scored 35 and Jordan Clark got 60, but the tail failed to add enough runs as Surrey’s T20 Blast campaign ended when they were bowled out for 167 with a ball to spare.

Hampshire had to beat Middlesex at the Rose Bowl to keep their slim hopes of qualification alive and they did it in style with an eight-wicket victory.

Having seen Paul Stirling and Dawid Malan put on 47 for the opening wicket Hampshire did well to restrict Pakistan star Mohammed Hafeez to 15 and England World Cup-winning skipper Eoin Morgan to 13.

But South African star AB de Villiers put on a show to score 52 not out from 34 balls to help his side reach 153-5 off their 20 overs.

In reply skipper James Vince scored an impressive 66 not out and put on 96 for the first wicket with Aneurin Donald to set the platform for their victory.

Sam Northeast’s 26 off 22 balls kept the scoreboard ticking over as the hosts reached their target with nine balls to spare.

England all-rounder David Willey may have missed out on the World Cup squad, but he showed the selectors what he could do with the ball as he blasted through Northamptonshire’s attack at Headingley.

He took four wickets for 18 runs as the Steelbacks were skittled out for just 107 in 18 overs trying to reply to the home side’s 187-7.

Yorkshire skipper Tom Kohler-Cadmore (51) and Adam Lyth (50) put on 88 for the opening wicket while Harry Brook hit 38 off 16 balls including three sixes.

Only three Northants batsmen made double figures as Tim Bresnan added two wickets for 15 – Scotland’s Tom Sole scored a career-best 41 off 35 balls was the only resistance.

The result was just Yorkshire’s third win of the season and moved them off the foot of the North Division at the expense of Durham with one game to go.

READ  Marcus Rashford can be as good as Cristiano Ronaldo, says Solskjær

Who can go through to the last eight?

The North Division is cut and dried, with Lancashire, Nottinghamshire, Derbyshire and Worcestershire all assured of a top-four finish.

Lancashire will top the group is they do not lose to Leicestershire at Old Trafford on Friday, while a loss could allow Notts to go top on run-rate if they can beat Durham.

Worcestershire will finish third if they can win at Northants, or second if Notts fail to win.

Sussex have wrapped up first place in the South Division ahead of a top-of-the-table clash with Gloucestershire at Hove.

Should Gloucestershire win they will guarantee second place while a loss could see Kent overtake them on run rate if they beat Essex.

The Eagles are one of four sides on 13 points along with fourth-placed Somerset, Hampshire in fifth and Middlesex in sixth.

It would come down to run-rates should Essex beat Kent and Hampshire win as there would be three sides with 15 points.