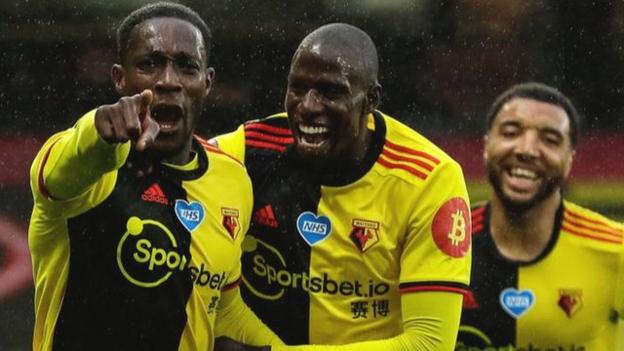 Danny Welbeck scored the winner with a spectacular overhead kick as Watford came from behind to beat Norwich and move four points clear of the Premier League relegation zone.

Norwich, who remain bottom of the table and are now 10 points behind the 17th-placed Hornets, will be relegated if they lose to West Ham on Saturday.

The home side won it through Welbeck’s wonderful goal, after the ball looped up following a poor clearance by Max Aarons.

Norwich had a late chance to grab an equaliser, but 19-year-old Adam Idah shot wide from five yards out when sliding in at the back post.

After their 1-0 home loss to Brighton on Saturday, Canaries boss Daniel Farke seemed resigned to relegation, saying that game had been their “last chance” and any talk of them staying up was “unrealistic”.

The German called for his side to show some pride and he will have been pleased with how they began at Vicarage Road.

Buendia, who had earlier seen a free-kick tipped over by Ben Foster, scored his first Premier League goal when he collected the ball from Onel Hernandez’s fine run, cut inside defender Adam Masina and curled the ball into the net from 15 yards out.

Norwich have received plaudits for their style of football since winning promotion from the Championship last season, and gained some impressive results, including wins over Manchester City, Leicester and Everton and draws with Arsenal and Tottenham.

But the key reason they look destined for an instant return to the second tier has been their poor defensive record. And true to form their lead only lasted six minutes before they conceded a soft equaliser.

Dawson lost his marker and was too strong for Alexander Tettey to head into the net from close range from Etienne Capoue’s delivery.

Farke will also be unhappy with Watford’s second, as Aarons should have done much better with his clearance before Welbeck’s overhead kick.

Norwich have now conceded more goals than any other team in the Premier League this season (63).

While Norwich, who still have to play both Chelsea and Manchester City away from home, will be preparing for Championship football next season, Nigel Pearson’s Watford still have their fate in their own hands.

This victory takes them on to 31 points, four more than Aston Villa and Bournemouth, with the Hornets also having a better goal difference than those two sides.

They take on a Newcastle side in mid-table on Saturday, before an away match at another team looking to stay up, West Ham, away from home on 17 July, before ending the season with games against Manchester City and Arsenal.

If Watford can survive in the top flight it will complete a remarkable turnaround under Pearson – their third manager of the season after Javi Gracia was sacked in September and Quique Sanchez Flores was dismissed in December.

When Pearson took over, Watford had only eight points from 14 games and were six points adrift of safety, but have now gained 23 points from 20 matches since Pearson’s appointment.

Both sides have home matches starting at 12:30 BST on Saturday, 11 July, with Watford entertaining Newcastle and Norwich taking on West Ham.