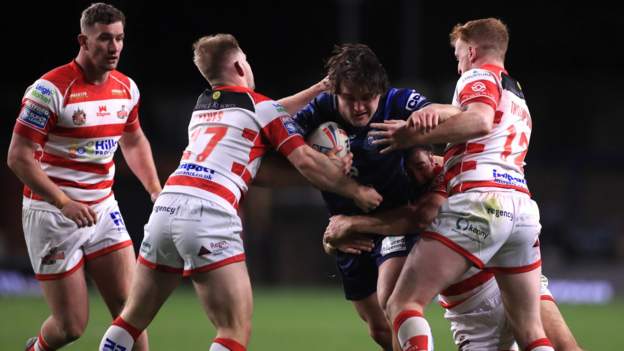 Wigan came from 18-0 down to win as they avoided an opening night embarrassment against promoted Leigh.

Leigh were in dreamland at Emerald Headingley when Liam Hood’s early try was followed by two in three minutes for Iain Thornley and Ben Hellewell, to which Ryan Brierley added conversions.

But Jake Bibby and Zak Hardaker crossed in quick succession before the break.

Joe Bullock and Bibby then scored twice in three minutes again – and Hardaker crucially this time landed both goals.

The loss of new signing Jai Field with a hamstring injury just 19 minutes into his debut left them having to deploy two back-row forwards, Willie Isa and the returning John Bateman, at centre.

By then, they were already 6-0 down thanks to hooker Hood’s early try – and worse was to follow for the Warriors when a second handling error by Bateman gifted Leigh an opening for Brierley to get former Wigan centre Thornley over for his side’s second try.

It then got even better when Hood broke clear and kicked ahead for second-rower Hellewell to touch down, awakening memories of the 50-34 win they enjoyed over their neighbours the last time they graced Super League in 2017.

But Bibby began the fightback just before the break when, having taken Field’s place on the right wing, he took a pass from Isa to go over in the corner before helping Bateman to unlock the door again for Hardaker.

Although Hardaker could not convert either try, to leave his team 10 points down at the break, he kept his cool when he got his second two chances.

The rampaging Bullock took a pass from impressive young half-back Harry Smith to score the third try after 62 minutes and Hardaker then broke spectacularly from deep inside his own half to get the supporting Bibby over for his second.

And, once Hardaker had kicked Wigan in front for the first time, last year’s league winners and Grand Final runners-up were able to get through the final quarter of the game unscathed.

“I’m gutted for the lads. I thought we should have seen out the game. It was a great effort but not smart enough.

“We should have built more pressure in the second half when we had the ball and we ended up getting burned by a champion team.

“I am really proud of the players and their efforts. We’ve just got to learn from it and move on because these games will come quick and fast.

“We can get better and we will, get some senior players back in the next few weeks.”

“To win by two points and get two points is a massive reward after the start we had. We found a way to win.

“We put pressure on ourselves with the errors at the start of the game, I’m just grateful that we got through and got the job done.

“We weren’t great but I’m really proud of the way we hung in there and showed patience.”