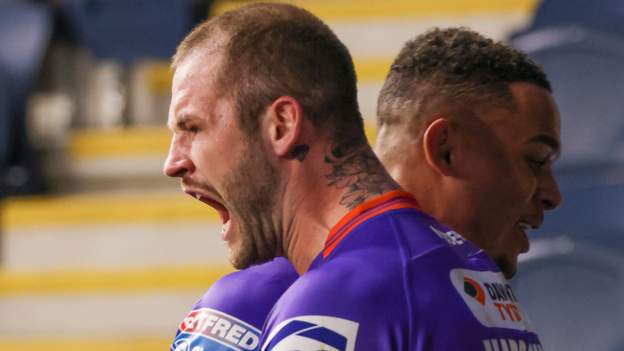 Zak Hardaker put in a sterling performance in defence and attack to steer Wigan Warriors to a hard-earned win over former club Leeds Rhinos.

Liam Farrell and Hardaker put the visitors in front at the break, though the latter missed both of his kicks.

Alex Mellor scored early in the second half to bring Leeds within two, but Jackson Hastings crossed to restore the Wigan advantage in a game of grind.

Farrell barrelled over late on to put the result beyond doubt.

Hardaker also slotted a drop goal just to chew down the clock and add to Wigan’s tally late on, to add to a chip and chase solo try.

Adrian Lam’s side have their own major absentees, such as Liam Marshall, Oliver Gildart and Bevan French, but managed to grind down Leeds in an attritional Super League game.

Hardaker put his hand up for the England full-back slot this autumn after a season in the centres with a fine display, and the combination enjoyed by him, hooker Sam Powell and half-back Jackson Hastings provided the special ingredients to break the game.

While Wigan were clinical, there were ample signs of character from Leeds in spite of their own raft of injuries which include Luke Gale, Richie Myler, Konrad Hurrell and Ash Handley.

Rhyse Martin worked hard out of position in the halves, while another makeshift three-quarter line featuring another back-rower in Mellor took on Wigan, but at times that extra level of craft and creativity was missing.

Kyle Eastmond showed signs of the quality he possesses in his first game back in league since 2011, particularly with a big pass for the Mellor try and threading numerous threatening short kicks into the Wigan in-goal.

But little moments, such as Martin failing to find touch from a penalty, proved costly as the Warriors pounced.

“I can’t fault the effort and commitment, it was top drawer again. We spoke about this at the weekend, being spirited in defending and that’s all well and good, but the bigger picture is we can’t lose heart.

“When we’re playing as tough as we are it’ll stand us in good stead. But at the same time, we’ll look at tonight’s game and think both halves had a couple of big turning points. When we were in good field position, we were saying that we could ask some stronger questions, whatever team we put out could have asked more of Wigan on their goal-line.

“Jack Broadbent flicked an intercept away on play one, and in the second half when Rhyse missed a kick to touch and then missed a tackle on Jackson Hastings, in a 12-6 game that was ebbing and flowing, that popped the cork. Regardless of who’s in the team or not in the team, those are little bits where we need to be better.”

“I thought it was a really physical game. I’m really proud of the boys for hanging in there throughout the game, especially in those defensive periods and being able to then go up the other end and score some points.

“We know there’s still some improvement to be had there. We’ve also got a really tough period of rugby coming up, so the way tonight’s game panned out was exactly what we needed.”

“I thought Zak Hardaker was outstanding again. A few of our young ones were great and Jackson had some important touches in key parts of the game.”

READ  Three ways Ole Gunnar Solskjaer can hurt Arsenal even without Marcus Rashford and Anthony Martial
Share on FacebookShare on TwitterShare on PinterestShare on Reddit
newsgrooveApril 15, 2021