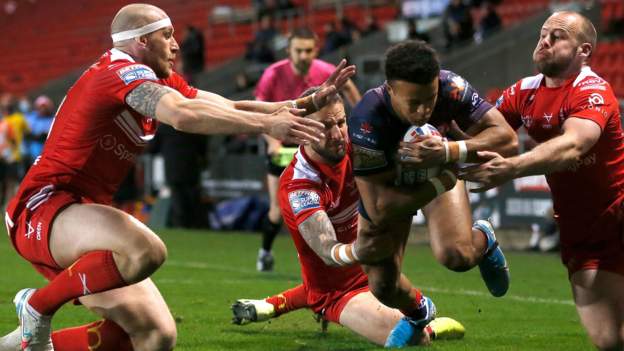 Champions St Helens made it two wins from two at the start of the new Super League season with a comfortable 25-0 victory over Hull Kingston Rovers.

Regan Grace touched down inside the first three minutes for St Helens and Jack Welsby scored another soon after.

George Lawler was sent to the sin-bin for Rovers and Saints made their extra man count as Aaron Smith added a third.

Winger Grace crossed for his second try as the game drew into its final stages to complete a straightforward victory.

The victory means Saints and traditional Easter opponents and major rivals Wigan, who beat Wakefield 34-6, both boast 100% winning records at the start of this fledgling season.

Welsby started at full-back for Saints, who were again without the injured Lachlan Coote, and he made an instant impact as he linked up with Jonny Lomax to send them 10-0 up inside the first 10 minutes, after Grace had danced in from the touchline to open the scoring.

Hull KR forward Korbin Sims, who took over Mose Masoe’s number 10 shirt this season, wore Masoe’s name on his back as the sport rallied around the former Rovers and Saints prop.

This week’s fixtures are dedicated to Masoe, who is continuing his recovery from a spinal injury he suffered in pre-season last year, with the former Samoa international in attendance at the Totally Wicked Stadium.

However, Sims, who is planning to auction his shirt to raise funds for the Mose Masoe Foundation, was forced off after a succession of head knocks early on, the first of which came during Grace’s opener for Saints.

Saints’ lead was extended after the break thanks to Makinson’s penalty and a Theo Fages drop-goal, although they were dealt a blow as Smith came off for a head injury assessment after taking a knock in the process of scoring his try.

Rovers had a further injury issue of their own in the closing stages as Elliot Minchella, who had put in a valiant defensive performance despite the scoreline, limped from the field.

“We made it difficult for Saints. I thought it was a real hard fought tough match. We had a couple of slip ups in the first 10 minutes which cost us but after that I thought we got into the arm wrestle to the point where Saints were taking penalty shots at goal.

“[Saints] Going for a field goal at 23 minutes to go tells you how much they respected our defence tonight and then their next points were when we had somebody in the sin-bin.

“Some of our attack probably suffered a bit tonight such was the commitment to the defence. I don’t want to take anything away from Saints, they’re a terrific defensive team who make you earn every point.”

“I was really happy with the performance. I thought Hull KR really came to play. They are a tricky team to defend against. They challenge you in different ways.

“I thought our blokes did a great job in defence and we had to work hard to break them down.

“[On Regan Grace] It’s outstanding having him in your team for that but where he’s getting better and better is what he does with the kicks, the way he takes those under pressure, and he’s also getting better in the way he gets you out of your own end with his carries.”