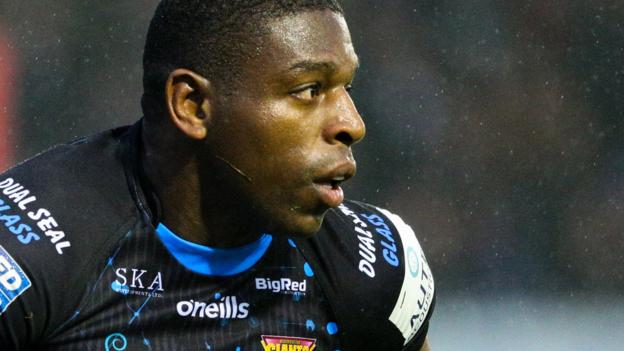 Giants trailed to a Jamie Shaul try in the corner despite a bright start, but England winger Jermaine McGillvary and Aaron Murphy crossed for the visitors.

Bureta Faraimo’s score out wide had Hull ahead at the break.

But a gutsy Giants display was rewarded inside the final 15 minutes, Louis Senior and Matt Frawley both crossing.

Huddersfield’s win leaves them two points clear of bottom two Hull KR and London Broncos with two games still to play, but having played a game more than their rivals.

Hull missed the chance to move to within one point of securing a place in the end-of-season play-offs but they remain two points clear of sixth-placed Castleford, who lost against leaders St Helens.

In a frantic first half, Giants were on top, dominating possession and position but failing to take their chances before falling behind to Shaul’s converted try.

McGillvary’s fleetness of foot saw him touch down in response and Huddersfield’s fine start was further rewarded when Murphy showed great hands and anticipation to collect a Lee Gaskell kick and touch down.

The hosts ensured a half-time lead thanks to Faraimo’s score in the corner and Marc Sneyd’s second conversion.

Another missed opportunity was spurned by Giants soon after the restart when Senior could not find the telling pass as he sped away down the left.

But following a tight second period which saw the visitors forced to defend for long spells, Senior made amends, muscling his way over the line and carrying two defenders with him for his side’s third try.

Victory was wrapped up when Gaskell found Frawley, who went under the posts.

“There was not a lot between the two sides. We conceded four tries and that has resulted in a loss. There were some key moments which didn’t go our way.

“I don’t think effort was a worry. There was a lot of effort. We need more from important people in our team to capitalise.

“The fans were awesome. They tried to pick us up. They did an important job of egging our players to get on the ball.”

“It’s obviously a huge relief for the players and the club. It was tremendous. We defended our goal line there for long periods in the second half. In previous weeks, we have buckled.

“At half-time we were a little bit unlucky to be behind. I knew we were going to come on over the top of them in the second half. Thankfully we came up with some big plays when we needed to.

“I was really confident at half-time. I was confident all week really. Don’t ask me where it’s been all year.”