The surge in Covid cases is thought to be linked to Jubilee Bank holiday mixing, new subvariants BA.4 and BA.5 and waning immunity among over-75s who have not had a Spring vaccine booster

A summer Covid surge has added to logjam in hospitals as the NHS waiting list hit a record 6.5 million.

The UK Health Security Agency today said there had been a spike in Covid outbreaks and hospitalisations last week.

There were 221 outbreaks recorded in Britain, up from 96 in the previous week. Of these 153 were in care homes and this was a rise from 67.

The surge is thought to be linked to Jubilee Bank holiday mixing, new subvariants BA.4 and BA.5 and waning immunity among over-75s who have not had a Spring vaccine booster.

UKHSA director Dr Mary Ramsay said: “After a period of low case rates, we are now seeing increases in outbreaks within care homes and in hospitalisations among those aged 80 years and over.

“As we enter summer, it’s still important to remember that Covid-19 has not gone away and to get vaccinated to reduce the risk of becoming seriously ill with the virus. If you’re not yet up-to-date with your jabs please come forward now – it is not too late to get protected.”

Dr Mary Ramsay during a media briefing in Downing Street
(

Covid admissions were highest in the North East.

It comes as new NHS data showed patients having to wait more than a year to start hospital treatment stood at 323,093 in April, up from 306,286 the previous month.

The overall waiting list for elective procedures such as hip ops hit 6.5 million, up from 6.4 million the previous month.

The unprecedented backlog comes after more than a decade of below average funding increases for the NHS which was then battered by the Covid-19 pandemic.

Some 12,000 patients every day remained stuck in hospital despite being well enough to be discharged due to overwhelming pressure on social care services.

While the overall NHS waiting list continues to rise, data for some of the longest waits showed some improvement.

A total of 12,735 people in England were waiting more than two years to start routine hospital treatment at the end of April, NHS England said.

Some 19,053 people had to wait more than 12 hours in A&E departments in England in May from a decision to admit to actually being admitted.

Covid on the rise as hospitalisations climb 30% in a week – but where are the hotspots? 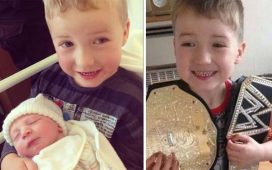