A brave 25-year-old woman livestreamed her own brain surgery – while she was lying awake on the operating table.

Jenna Schardt suddenly suffered what seemed like a stroke – the same symptoms she was helping patients cope with as part of her training to be an occupational therapist at Brenau University in Gainesville, Georgia.

In fact, Jenna was having a seizure, caused by a tangle of malformed blood vessels in her brain, called a cavernoma.

Doctors found the benign mass in Jenna’s brain and attempted to treat her symptoms with medication, but it hasn’t been working.

So, for Jenna to be able to continue her studies uninterrupted unpredictable seizures, doctors recommended that she have the blood vessel nest removed, via open-brain surgery.

What’s more, the cavernoma was nestled into an area of Jenna’s brain that controls her speech, so doctors needed to very precisely map out where it was safe to operate without rendering Jenna unable to communicate.

And to do that, they needed to be able to observe her awake, and talking, while her brain was exposed and being (carefully) poked and prodded it and waited to see how it would affect her speech.

Jenna, an Illinois native, decided she wanted anyone and everyone else to see be able to observe her operation, too, so Methodist Dallas Medical Center livestreamed her surgery on Tuesday. 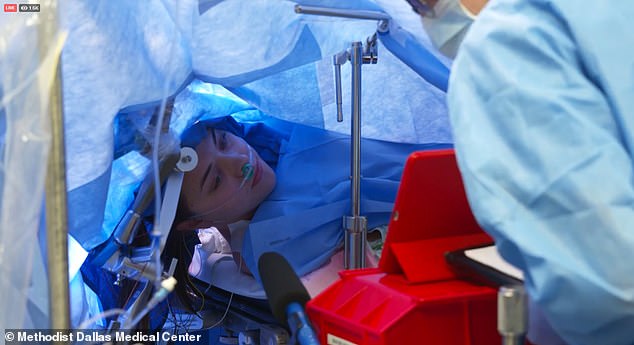 Jenna Schardt, 25, was diagnosed with a cavernoma, a malformed tangle of blood vessels in her brain. She and her neurosurgeons at Methodist Dallas Medical Center decided to live stream the surgery, for which Jenna was awake to monitor her brain’s language centers

As well over 1,000 people watched from their smartphones and computers around the world, the camera zoomed slowly in on Jenna’s face, the only part of her not concealed by blue surgical draping.

Unlike most patients undergoing major surgery, Jenna was not intubated with a machine breathing for her.

A single green tube ran beneath her nose, helping to ensure she was getting enough oxygen.

Behind the surgical draping, hidden from view of the camera, was Jenna’s exposed brain, a piece of her skull removed to give two neurosurgeons access to the organ.

A few minutes after the cameras started rolling, Jenna’s unencumbered lips twitched upward toward a smile, her eyelashes fluttered and she cast a dreamy glance around her.

‘Oh, she’s awake!’ someone in the operating room exclaimed.

Jenna’s eyes closed again for a bit, the rest of her stock still thanks to a large halo-like clamp holding her head in place.

When she opened her eyes again, moments later, Jenna looked utterly nonplussed by the sterile environment or the singular experience of lying awake while surgical instruments probed her brain.

For the hour and a half before the anesthesiologist slowly brought Jenna back to consciousness, the surgical team worked carefully to cut away the necessary piece of skull, thoroughly numbing her skull and the three layers of protective tissue – called the meninges – surrounding her brain. 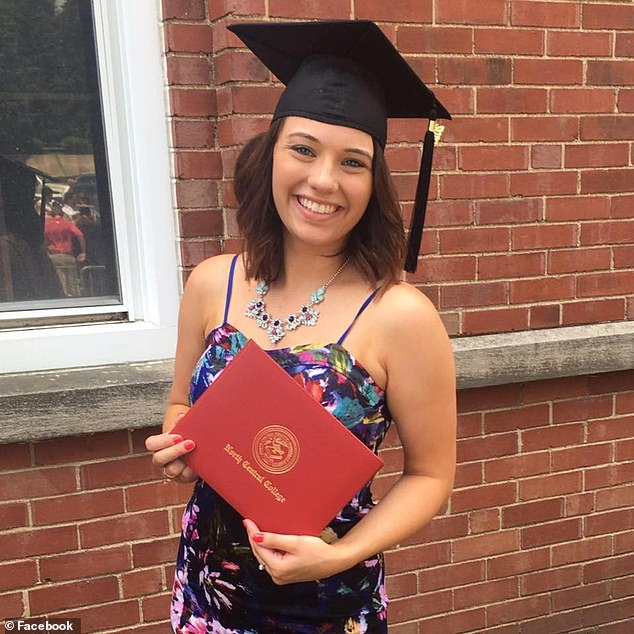 While working with stroke patients as part of her master’s program in occupational therapy, Jenna developed some of the same symptoms as her patients – but she wasn’t having a stroke, but a seizure caused by the tangle of blood vessels in her brain 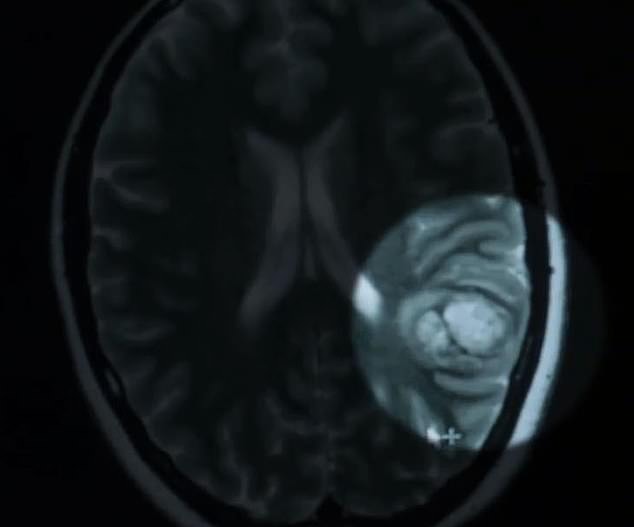 A brain scan revealed the tangle of blood vessels, called a cavernoma, in the left hemisphere of Jenna’s brain, near the brain’s language center (lit on right hand side of image)

As chief of neurosurgery at Methodist Dallas Medical Center, Dr Nimesh Patel, explained during Jenna’s procedure, the brain itself has very few pain receptors, so it’s quite impervious to the sensation, even when being poked by metal tools.

In other words, Jenna wasn’t feeling much discomfort besides being held up rigidly on her side by the head clamp and some mild dry mouth, a common side effect of anesthesia.

She smiled as the neural monitor, a man named John, bent to position himself within her view.

Jenna’s cavernoma was located in the left hemisphere of her brain, where speech is formulated and processed for 95 percent of us.

An estimated one in 100 to 200 people are thought to have cavernomas, but about a quarter of those never have any symptoms. 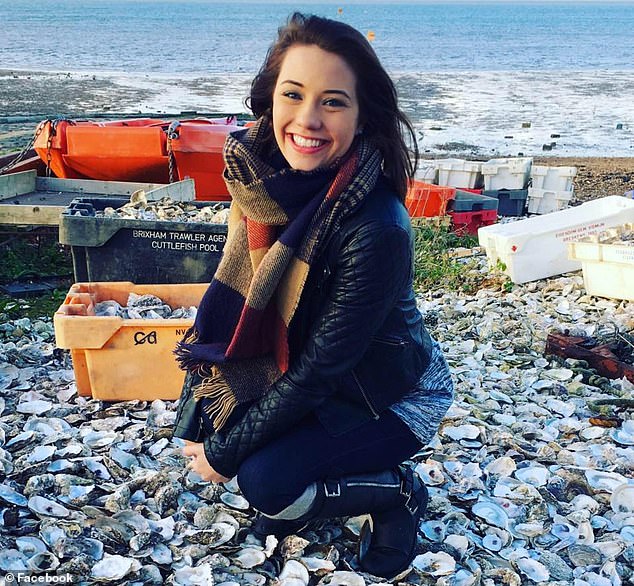 Ahead of the operation, 25-year-Jenna was calm and collected, hoping someone could learn from her experience. Pictured: on a trip to the UK

There’s no clear cause; blood vessels just grow into a tangle instead of feeding to and from various regions as they ought to.

As the formation grows, it can pres on parts of the brain, disrupting the functions, leading to vision loss, double vision, confusion, nausea, headaches, trouble sleeping, problems with balance and more.

The primary risk that comes with a cavernoma is that one or more of the vessels in the tangle will burst, bleeding out into the brain – or hemorrhaging – and causing neurological damage.

The size and location of a cavernoma determines the risks associated with surgically removing it.

And what measures, like keeping the patient awake, as was Jenna’s case, are necessary to ensure the safe removal of the malformation.

If the surgeons tested part of the intended surgical route around the cavernoma and found that it disrupted Jenna’s speech, it might have been worth it to risk leaving some of the vascular formation in place, rather than damage an intact part of her language brain.

‘What she’ll be saying and where [the surgeons are testing her brain] indicates where to go and, more importantly, where not to go,’ explained Dr Patel. 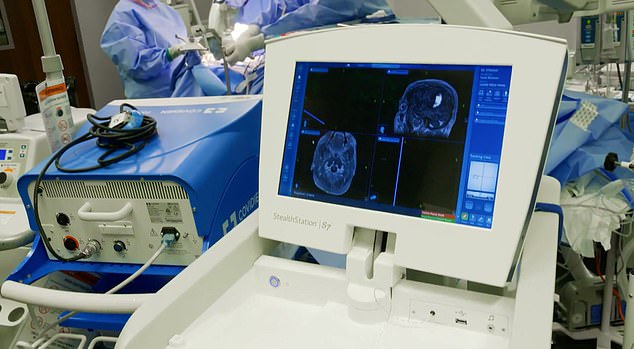 During brain surgeries like Jenna’s doctors use a digital guiding systems to reach the malformation using scans (pictured), but Jenna’s was more delicate than most because of its proximity to her brain’s language center 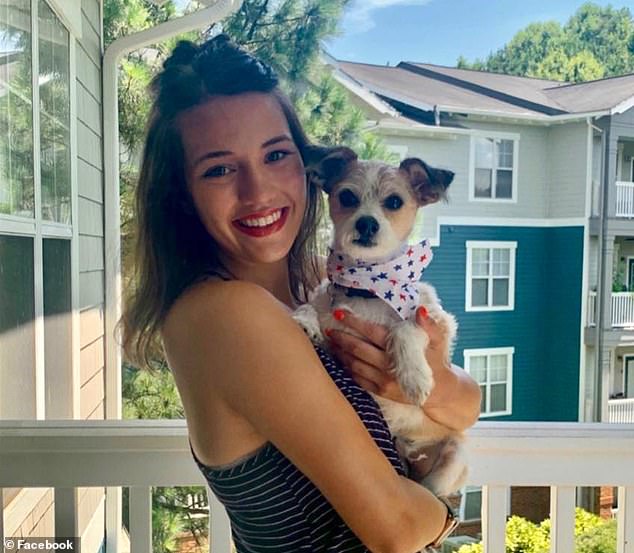 Once surgeons began removing the cavernoma, a neural monitor carried on conversation with Jenna to distract her from the work being done to her open brain – including about her beloved puppy, Paisley (pictured)

‘A millimeter to the left or to the right can affect her speech, so if she’s unable to speak [when the stimulate a part of her brain], we know it’s a region that we want to avoid.’

Once it was clear she was comfortable and ready, John instructed Jenna to look at an iPad and name the images she saw there.

Each image cue was preceded by a futuristic ‘pew!’ sound, an indicator that the surgeons were stimulating a new section of her brain.

‘butterfly…turtle…banana…orange…man…four…shoe,’ Jenna says, after each ‘pew!’

‘We’re really waiting for her to miss something, that’s an indication that that’s a no-go zone,’ explained Dr Patel.

Jenna continues without a hitch for some time, before finally she pauses a little longer than usual and stumbles on a word.

A no-go zone. The surgeons mark it as such. 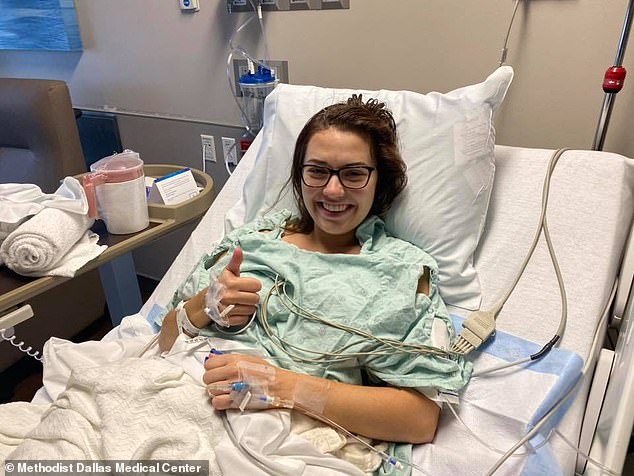 A few hours after surgery, Jenan was awake, recovering well and giving a grinning thumbs up to the camera. She’ll be monitored closely but is expected to make a full recovery

After a few more minutes of Jenna perfectly naming her cues, the surgeons are satisfied with the route they’ve mapped out. They announce they’re ready to begin the removal.

The doctors decide they’ll leave Jenna awake for the first stages of the cavernoma removal.

The neural monitor crouched down in front of her again and started chatting with Jenna.

The two carried on a remarkably casual conversation as Jenna eloquently talked about her ‘baby’ – a puppy named Paisley, about her hopes to walk for graduation from her master’s program and more.

At last the doctors reached the cavernoma, increased the anesthesia, had Jenna count to 20 and stopped the cameras to finish the surgery.

‘I feel pretty calm, I have peace about the situation…if this can be some kind of learning opportunity for somebody else…I feel peace about it,’ Jenna said before the surgery.

A few hours after surgery, Jenna was awake, smiling and giving the camera a thumbs up.

She’ll have to be monitored for some time, to make sure that the whole cavernoma was removed and that the path to the malformation was as clear as it looked during surgery, but if all goes according to plan, Jenna will make a full recovery and be able to finish her master’s degree in occupational therapy next year. 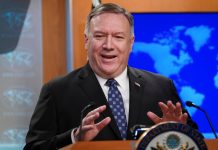 Coronavirus: Are you more likely to die from COVID-19 or flu? The major difference

Tenerife coronavirus: Jet2 will fly only guests who test negative 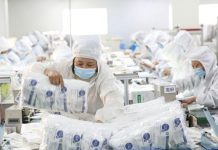 Coronavirus latest: How to self-isolate – vital tips you need to know from Dr Hilary 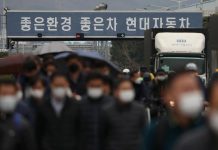 Coronavirus spreads around the world – in pictures