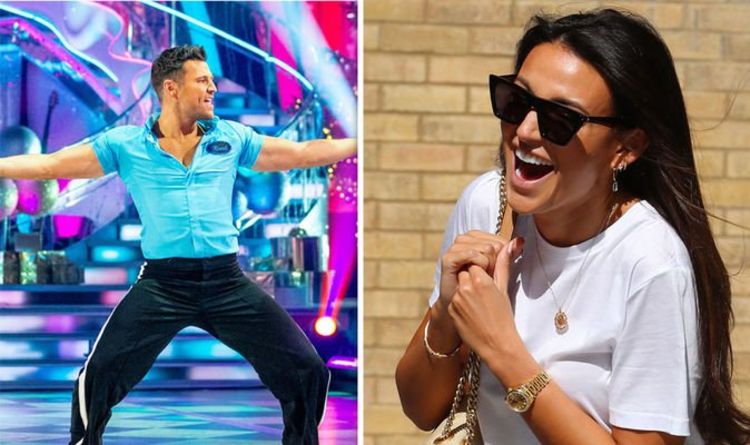 The Only Way is Essex star Mark will be taking to the floor on Christmas Day dancing a Salsa to the song Christmas Wrapping, after taking part in the twelfth series. Ahead of the festive special, Mark has dropped some hints his wife could join Strictly, just how bad his dancing nerves used to be and watching himself on Youtube. But, are the rumours true and will fans see Michelle Keegan on the dancefloor anytime soon?

After not dancing for the last five years, fans may think Mark would be rusty getting those hips moving again, but he disagrees.

Speaking to press including Express.co.uk, Mark explained: “Do you know what when I first started Strictly it took ages to get the first routine cause you’ve never done those steps before.

“But the muscle memory came back and it wasn’t as bad as I thought, even though it had been five years.”

He has been partnered with pro-dancer Janette who he competed against in 2014 with EastEnders actor Jake Wood, but there didn’t seem to be any hard feelings.

When asked if his actor wife Michelle would ever do Strictly, Mark was quick to respond.

He said: “Never say never but her nerves would go to another level.

“I’m a bit more like, come on lets just have it, but whenever she watches me – I showed her videos before and she was like I don’t know how you do it.”

It seems the couple both share some big problems with nerves as Mark’s used to get so bad he thought he would pass out.

Despite his past nerves, they don’t stop Mark from watching his own performances back.

He explained: “When I look back at all my old dances I love them but I can always see a bit of fear in me.

“This one I just want to really go for it and then (watch the performance) weeks after on Youtube that’s why I want it to be good.”

Mark’s enthusiasm to do all the lifts and tricks caused a scary injury though, Janette explained: “We had a little bit of a scare that he wouldn’t be able to do some of the tricks but all good though, he hurt his back but today things seem ok.”

Janette revealed she spoke to Mark’s part partner Karen and asked for some advice.

She revealed: “She said, when it came down to picking what dance we do for the Christmas special, she just said he hates ballroom.”

Mark interrupted: “And you’re not meant to change cause you don’t want to look like you’re trying to request anything but really politely I was like ‘Please I’m coming back for once and once only please let me do a fast dance.’”

The Strictly Come Dancing Christmas special will air on BBC on Christmas Day at 4.40pm.

READ  Amber Gill admits she lied on her Love Island VT 'to sound more interesting'
Share on FacebookShare on TwitterShare on PinterestShare on Reddit
newsgrooveDecember 27, 2019