STRICTLY’S Craig Revel Horwood issued a grovelling apology on Saturday night after suggesting celebs should sleep with their pro partners like Stacey Dooley.

The acid-tongued judge, 54, admitted he had made a “huge error” and he deeply regretted his “hurtful” jibe, made during filming on Friday night.

Last year’s champ Stacey – now dating former dance partner Kevin Clifton – was sitting in the audience with her family at the time.

Filming was halted as aides rushed over to them, but her mum Di fled the Strictly studio in tears.

BBC sources said Craig was savaged by bosses for the “totally unacceptable” remark — and ordered to apologise.

Craig said on Saturday night: “I’m deeply sorry for the offence caused to Kevin and Stacey and everyone who works on the show.

“I recognise that what I said was hurtful, cruel and incredibly disrespectful. It was a huge error of judgment that I very much regret.”

It came after reigning champions Stacey and Kevin took to the ballroom floor during filming for the pre-recorded launch show, which is aired next weekend.

Craig initially told her the contestants should be inspired by documentary-maker Stacey, 31.

Stacey was dragged up from the dance gutter… of course, if you sleep with your dance partner that helps

He said she had been “dragged up from the dance gutter” before winning the show.

But he then added spitefully: “Of course, if you sleep with your dance partner that helps…”

Sources said the snide remark sent shockwaves around the studio, and horrified bosses immediately called for filming to be halted. Worried aides flocked to Stacey and her family while executive producers immediately decided to scrap the footage.

The hosts, panel and audience were then asked to return to their places to re-film the sequence.

One source said: “It was an awful moment. Craig was obviously trying to be funny, but realised as soon as he said it that he had gone too far.

“The audience was visibly shocked, as was Tess Daly and the other judges.

“Immediately after he made the comment, ‘cut’ was called, and chaos broke out.

“Several aides rushed over to Stacey and her family to check if they were OK. They were all stunned, and Stacey’s mum obviously wasn’t OK at all.

“She looked very upset, and soon after that she left the studio in floods of tears.

“The bosses were absolutely furious with Craig and wasted no time in taking him to one side afterwards and telling him the remark was totally unacceptable.

“They encouraged him to make a full apology to Stacey and Kevin, which he was happy to do.

“He knows that what he said was completely out of line.”

The launch show for this year’s series will be screened on BBC1 next Saturday.

Days before filming, Stacey had shared her excitement about returning to Strictly on social media with a series of photographs backstage.

One, showing her having her hair done, was retweeted by proud mum Di.

And boyfriend Kevin, 36, posted a heart emoji underneath the shot.

The Sun on Sunday revealed in April how Stacey was secretly dating him after ditching long-term boyfriend Sam Tucknott.

The pair were said to have grown close while filming the show, with their on-screen chemistry helping them sail through to the final last December.

After winning the trophy, Stacey gushed about her partner: “I should say something quite poignant, shouldn’t I? You know how highly I think of you. I think you are the biggest gem.

“It’s no surprise you have been in the final as many times as you have. It’s daunting doing something you haven’t done before. But he’s so patient and he walks you through. You so deserve this.”

Kevin replied: “Thank you so much, not just for being so amazing and for dancing so well, but for being the most wonderful person to work with, to spend every day training with.

“You’ve worked so hard. You are so lovely and I think the absolute world of you.”

Kevin supported Stacey as she performed on the Strictly Come Dancing Live tour – despite not taking part himself. In January they were seen apparently sharing a hotel date in Birmingham.

But Sam got a shock when the pair cleared out their Brighton flat on April 1. He spotted a text from Kevin on Stacey’s phone which read: “I love you.”

Stacey, who has a £250,000-a-year golden handcuffs deal with the BBC, later texted Sam to insist she had only fallen for him once the couple had separated.

But her explanation failed to reassure Sam, who branded Kevin a “rat” and a “snake”. Stacey and Kevin‘s relationship has since gone from strength to strength.

In July Stacey broke her silence on the romance to gush about “amazing” Kevin – who was previously married to Strictly pro Karen Clifton.

She told a newspaper: “What I am happy to say is, ‘Kev’s amazing, I’m happy, life happens, I’ve got an amazing career and I’m very lucky.’”

A BBC source said on Saturday night of the judge’s comment: “Craig was told in no uncertain terms that this was completely unacceptable.

“It goes against everything the show stands for and it’s right that he’s issued a full apology.”

600 hours of training to thank for victory 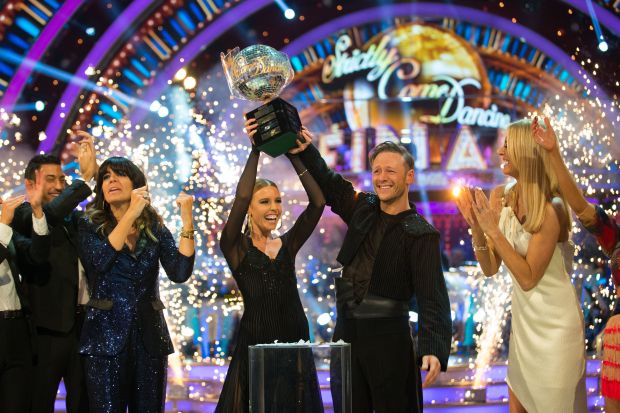 BY the time Stacey Dooley lifted the trophy last year she had endured almost 600 hours of gruelling training.

Weeks before the final she was taken to hospital after tearing an intercostal muscle behind her rib, and almost vomited from the pain.

Two days later she was back rehearsing and scored 36 out of 40 that week.

Stacey was not what you would call a natural dancer.

She considered quitting after a disastrous score for her cha cha cha in week two, before doggedly carrying on.

So how frustrated she must have been on Friday to hear her triumph apparently put down to her “sleeping with her dance partner” rather than her work ethic.

Craig Revel Horwood’s snide remark will have also cut deep for Kevin Clifton – who put in just as many hours alongside Stacey.

He had reached no fewer than four finals before finally being crowned.

So the suggestion that he too slept his way to the top will add a bitter taste.

There’s no doubt that the pair’s chemistry helped them along their path to glory.

But as an experienced judge, Craig should know better than to brush away the blood, sweat and tears that really won the trophy.

It takes 2 to tango

STACEY Dooley and her dance pro partner Kevin Clifton are not the first Strictly duo to add some extra magic to the mix with their sizzling chemistry . . .

SOAP star Kara Tointon, 36, and dancer Artem Chigvintsev, 37, won the Glitterball Trophy after falling for each other on the show in 2010. They stayed together for three years.

NO INVITE FOR MAE?

ENGLAND rugby ace Ben Cohen, 40, lasted to week eight in 2013 thanks to dance ace Kristina Rihanoff, 41. He later got divorced and now has a daughter, aged three, with Kristina.

CORRIE actress Georgia May Foote was swayed by Giovanni Pernice’s charms in 2015, and the passionate pair made the final together. They went on to date for almost a year.

YOUTUBER Joe Sugg, 27, and dancer Dianne Buswell, 30, narrowly lost out to Stacey and Kevin in last year’s final. They also became a couple and are planning to move in together.

READ  14 Coronation Street spoilers for next week as Fiz ATTACKS Jade and leaves her unconscious
Share on FacebookShare on TwitterShare on PinterestShare on Reddit
newsgrooveAugust 31, 2019