Strictly Come Dancing Blackpool: Motsi Mabuse suffers a hilarious blunder as she MISSES her cue for the judges’ grand entrance

Strictly Come Dancing judge Motsi Mabuse suffered a hilarious blunder during Saturday’s Blackpool spectacular as she made her entrance with the rest of the judging panel.

The South African dancer, 38, was left in hysterics when she missed her cue to pose with her co-stars after arriving on the dancefloor at the start of the show.

Viewers took to Twitter in hysterics to point out Motsi’s blunder, as she laughed along with her fellow judges. 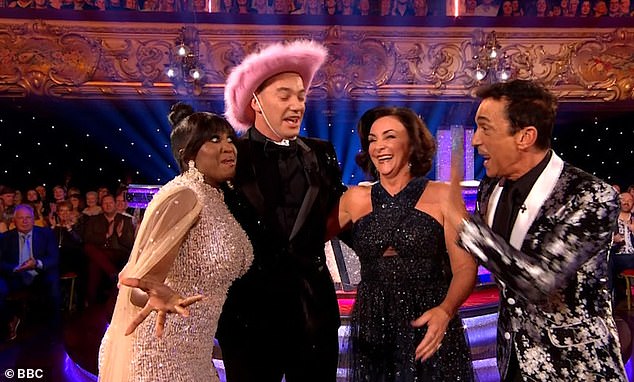 Oops! Strictly Come Dancing judge Motsi Mabuse suffered a hilarious blunder during Saturday’s Blackpool spectacular after she missed her cue to arrive with the rest of the panel

At the start of the show, Motsi made her typically dramatic entrance alongside Shirley Ballas, Craig Revel-Horwood and Bruno Tonioli.

Despite heading onto the dancefloor at the correct time, Motsi took her time heading over the panel, and missed the final beat which usually see the judges strike a perfect post for the camera.

Luckily Motsi took the blunder in good humour as she pulled a bewildered expression alongside the rest of the judging panel. 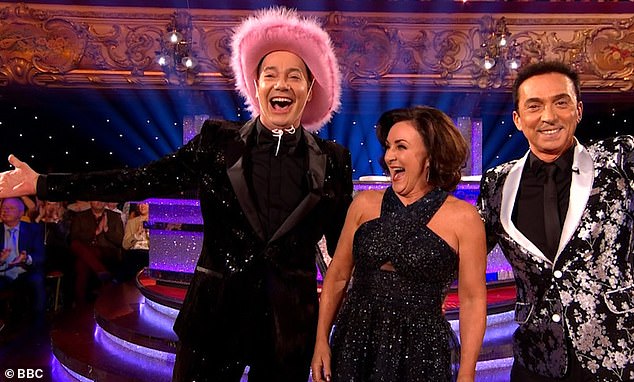 Oh dear! At the start of the show the judges danced their way over the desk, before striking a pose for the song’s final beat, which Motsi appeared to miss

Funny: The moment left many fans in hysterics, with one joking she must have taken a wrong turn on her way to the Blackpool Tower Ballroom

Viewers took to Twitter to point out the funny mistake, with one joking that she must have been late making it to Blackpool on time.

One posted: ‘@MOTSI_MABUSE is my new addiction… absolute queen she is.’

Another added: ‘I love @MOTSI_MABUSE so much and I want to be friends SHE IS EVERYTHING #Strictly.’

A third also posted: ‘What the hell was she doing I’m dying,’ with another tweeted: ‘I thought they lost Motsi on the way?’ 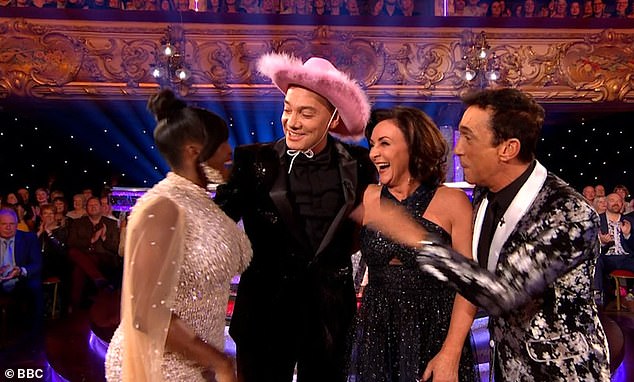 My bad! Luckily Motsi took the blunder in good humour as she pulled a bewildered expression while laughing along with the rest of the judging panel

Motsi’s blunder came at the start of another jaw-dropping Strictly show in the Blackpool Tower Ballroom, which saw Kelvin Fletcher and Karim Zeroual finish in joint first place on the leaderboard.

The pair came perilously close to a perfect score as they each earned 39 points out of 40 for their energetic routines.

In a Strictly first, pro Anton Du Beke also earned his first ever ten after 15 years on the show, after dancing an American Smooth with actress Emma Barton.

Strictly Come Dancing: The Results air on Sunday 17th November at 7:15pm on BBC One. 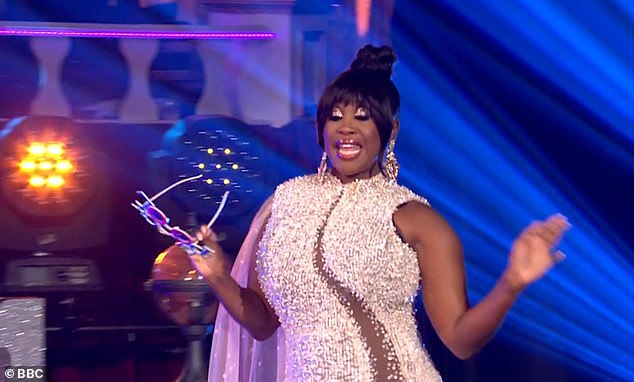 Back soon: Strictly Come Dancing: The Results air on Sunday 17th November at 7:15pm on BBC One