Strictly Come Dancing: Bill Bailey Singin' in the Rain as he arrives at BBC studios 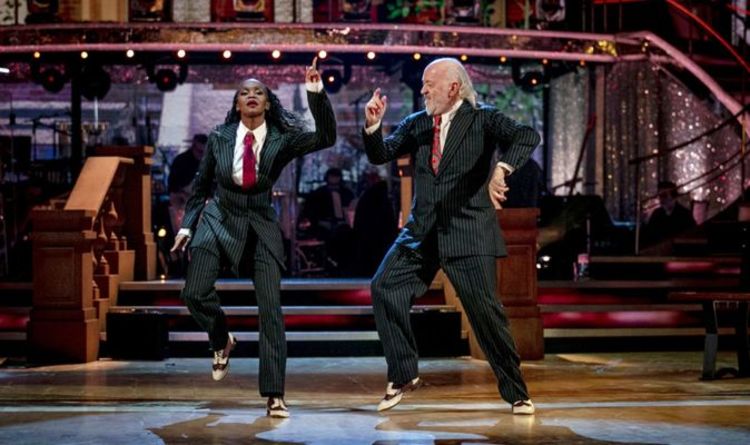 He was showing the kind of moves which have seen him and dance partner Oti Mabuse emerge as 4-6 favourites to win the Glitterball. The comedian has already delighted viewers with his dance to heavy metal band Metallica, and they will be treated again to his routine to the Sugarhill Gang track Rapper’s Delight in the final.

Bill, 55, and Oti, 30, arrived at the studios for the spin-off show It Takes Two. Oti sensibly kept under an umbrella as the heavens opened, but Bill was keen to mirror the mood of the hit 1952 musical and the famous sequence by star Gene Kelly.

Kelly played silent movie star Don Lockwood, who declared himself “ready for love” in the song after a kiss from love interest Kathy Selden, played by Debbie Reynolds.

Kelly then went into the celebrated dance routine on the flooded pavements, twirling his umbrella, before being brought to a halt by the disapproving gaze of a policeman. The sequence has since been celebrated as one of the most iconic ever filmed.

Bill’s dance moves were not inspired by a kiss but viewers have noticed the adoring glances from Oti on the show.

She has described him as “my absolute hero” after winning over fans with his fancy footwork.

Bill and Ozi will be up against Maisie Smith and Gorka Marquez, HRVY and Janette Manrara, and Jamie Laing and Karen Hauer in the final on Saturday.

In terms of winning, Bill admitted the possibility has crossed his mind.

He said: “I haven’t really thought about it too much but I have allowed myself to think, ‘Well, we’ve come this far.’ Do you know what I mean?”