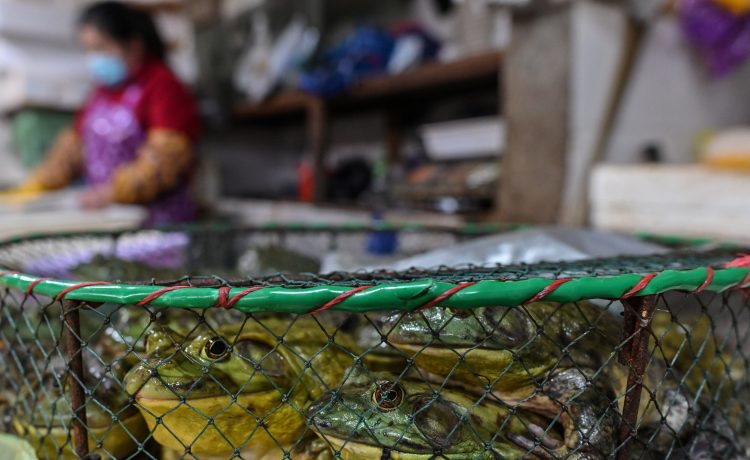 t’s more than a year since an outbreak of a mystery virus was traced to a wet market in the central Chinese city of Wuhan, and it’s hard for anyone to imagine in January 2020 that the previously unknown disease, which would come to be known as Covid-19, would have gone on to infect more than 100 million people worldwide.

Soon after the virus spread across the city of more than 11 million people in January 2020, local officials in Wuhan quickly shut down the Huanan Seafood Market. Then in February 2020, China’s National People’s Congress passed a ban on the consumption of wild animals as food.

The move was followed by plans to revise China’s Wildlife Protection Law, amend the Animal Epidemic Prevention Law and introduce a Biosecurity Law, all of which were part of Beijing’s efforts to prevent other zoonotic diseases from jumping from animals to humans in the future.

The temporary ban on eating wildlife had some immediate effect on China’s wild animal markets and farms, a lucrative industry that’s worth £13bn  annually, according to a report published by the Brookings Institute in January. The ban means the habit consuming wildlife as a source of food will become a thing of the past in many parts of China.

“There are basically no opportunities for normal people to eat wild animals as a source of food in many parts of China,” said Jay Fang from the Green Consumers’ Foundation in Taiwan. “I think regular citizens in China now are more aware of the effect of the ban introduced by the Chinese government in 2020.”

According to Mr Fang, the ban has made it almost impossible for vendors to sell wild animals in markets across China. “Even if some people still try to buy wildlife under the table, it is now hard for wildlife trade to return to the same scale as how it used to be before the pandemic,” he told the Independent.

“The pandemic has really taught Chinese authorities a hard lesson, and they are no longer so tolerant towards wildlife trade and wildlife consumption as food. However, while Beijing acted quickly to enforce the ban on consuming wild animals as food, they haven’t really addressed the structural issues behind the entire wildlife trade ecosystem.”

The Independent’s Stop the Illegal Wildlife Trade campaign, which was launched last year, seeks an international effort to clamp down on poaching and the illegal trade of wild animals, which remains one of the greatest threats to biodiversity in the future.

The Independent is working with conservation charities including Space for Giants and Freeland to protect wildlife at risk due to the conservation funding crisis caused by Covid-19. As China began some efforts to curb wildlife consumption in the country following the coronavirus outbreak, the Independent works with its partners to gain more insights about the impact of Beijing’s efforts.

And according to ACTAsia, a nonprofit organisation that works to bring about sustainable social change in China, the series of measures introduced since February 2020 to ban wildlife consumption and illegal wildlife trade created several loopholes that could potentially lead to another pandemic caused by a zoonotic disease in the future.

While some animals, such as the blue peacock, have now been banned for consumption, people are still allowed to trade them for entertainment or other purposes

“Apart from banning people in China from eating certain kinds of wild animals, the new regulations and amendments introduced last year still allow wildlife breeding and trading for other purposes including fur, medicine or entertainment,” said Pei Su, the founder of ACTAsia.

“Under the new law, frogs and snakes can still be consumed as food or be bred for commercial purposes,” Mr Fang explained. “The only difference before and after the coronavirus pandemic is that some species have disappeared from the market as a source of food.”

Ms Su points out that while the existing law bans Chinese people from eating certain species of wild animals like pangolins, civets, bats, tigers and other wild animals, they could still be farmed for the other purposes permitted under the new rules.

“Many people thought the updated Wildlife Protection Law has banned all illegal wildlife trade, but many wild animals have been re-categorised as ‘livestock’ or ‘aquatic wild animals,’ which are both permitted to be farmed and commercially traded for other purposes,” she explained.

Ms Su said animals such as mink have been re-categorised as a “livestock” in China, which allows it to be exempted from the Wildlife Protection Law and the ban announced in February 2020. Additionally, frogs have been categorised as “aquatic wild animals,” which allows vendors to keep selling them at markets across China.

“China’s laws often look very comprehensive on the surface, but in fact, there are lots of back doors for illegal activities to continue under some ‘moderation,’” she added.

In the Brookings Institute report, Vanda Felbab-Brown, the director of the Initiative on Nonstate Armed Actors at the organisation, highlighted an example of how the existing regulations have ambiguities that will make wild animals remain vulnerable to commercial farming or exploitation in China.

“Although most traditional Chinese medicine doesn’t use wild animal parts, the products that do have dramatically exacerbated the collapse of wild species around the world through legal trade or poaching,” she wrote.

“Unhygienic practices on traditional Chinese medicine wildlife farms produce similar risks of zoonosis,  unless the veterinary and butchering practices are improved. Worse yet, many wildlife farms in China and elsewhere are, in fact, stocked from the wild, introducing pathogens to farms and jeopardizing wild populations.”

Ms Su told the Independent that since China halted consultation for revising the Wild Animal Law in November 2020, conservation groups worry the existing law will create loopholes that could lead to serious pandemic in the future.

“There are grave concerns that Articles 26 and 29 of the law actually support captive breeding of wild animals with a permit, with the only condition being that a species already has a substantial captive-bred population,”  she said. “Once a permit is issued to breed a species, that permission can quickly evolve to categorising a wild animal as livestock.”

Ms Su explained these practices led to the widespread commercial breeding and farming of wild animals like mink, foxes and raccoon dogs, which are labelled as “livestocks” in China and farmed intensively for their furs.

“As researches have shown that minks and raccoon dogs are potential intermediate hosts in the transmission of coronavirus, large-scale commercial breeding and trading of these animals creates serious risks of causing another pandemic in the future,” she added.

While such loopholes remain in laws designed to restrict the trade of wildlife in China, Ms Su remains pessimistic about Beijing’s campaign to prevent future zoonotic disease outbreak. “Since around 75 per cent of the zoonotic diseases originate from wild animals, if China continues to permit commercial breeding and trading of wild animals, the spillover of zoonotic diseases from animals to humans will never stop,” she warned.

“Covid-19 is a perfect example of how zoonotic diseases will spill over from animals to humans, so if we want to prevent more pandemics from happening, we need to ban large-scale commercial breeding and trading of all kinds of wild animals.”

As China’s National People’s Congress is expecting to resume in March, the conservation community is now trying to urge the Chinese government to further amend the Wildlife Protection Law and pass more laws to ensure that illegal wildlife trade can be completely banned in the country.

“Given the fact that China has a really low awareness about wildlife conservation, that makes it hard for the government to comprehensively enforce any relevant laws that they have enacted,” Ms Su said.

“Once vaccines and treatments for Covid-19 become widely available, Chinese people will soon forget about what triggered the whole pandemic in the first place. We need to educate the younger generation in China about why they shouldn’t eat, breed or trade wild animals. As long as commercial breeding and trading of wild animals is still permitted, illegal wildlife trade will continue to survive in China.”