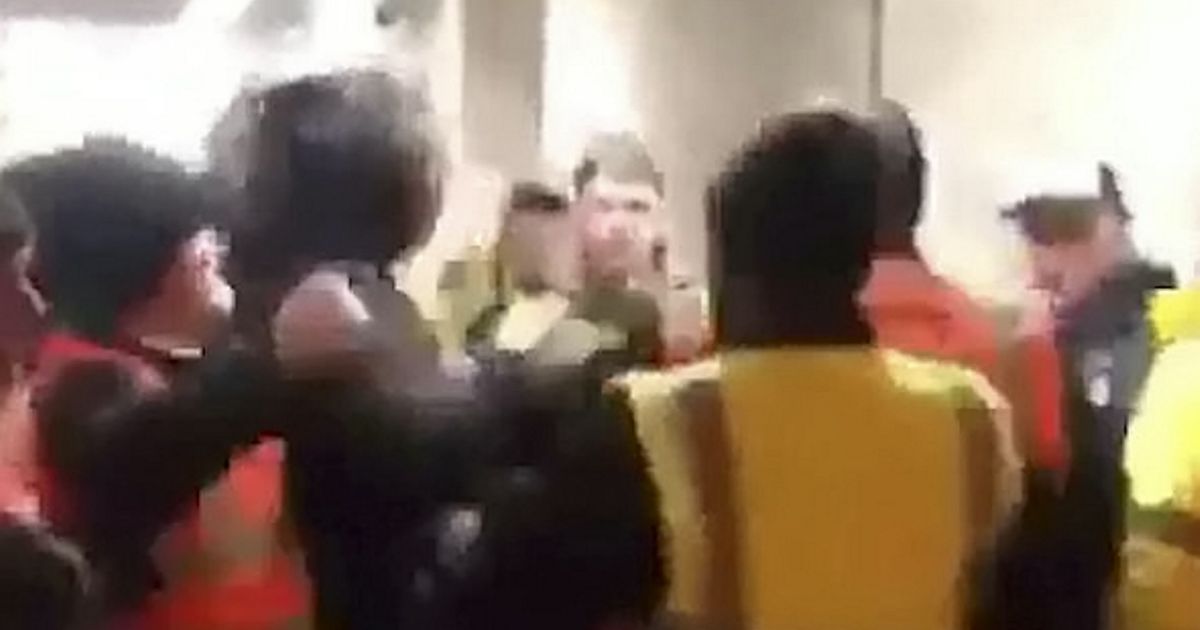 This shocking video shows the moment a footy fan was punched in the face by an “aggressive” and “out of control” steward.

The incident happened in the concourse at Bloomfield Road during Blackpool’sEFL Trophy tie versus Scunthorpe last night (Weds).

According to an eyewitness, a group of 20 stewards were removing 10 fans from the ground for standing up when the clash occurred.

A seven second video shot by one of the ejected supporters shows a hooded man, aged 19, rushing forward towards the officials.

One of the stewards, who looks in his 50s, then grabs the fan with his left arm and uses his right fist to punch him in the side of the head.

The supporter had his back to the steward and didn’t appear to be lashing out when he was struck.

An eyewitness, who does not want to be named, said: “Me and my mates were stood up at the game and were told by stewards to sit down.

“When we scored we obviously stood up again to celebrate the goal – we didn’t think there was a problem with that.

“In about the 80th minute I went to the toilet and I was grabbed by a steward who told me I was getting chucked out.

“Then the rest of the stewards went and grabbed my mates from their seats.

“They were dragging us around to get us out of the ground, their approach was really over-aggressive and out of control.

“My mate was then pushed from behind into some of the stewards, which is when one of them grabbed him and hit him in the head.

“Luckily the whole thing was caught on camera so people can see exactly what happened.”

The eyewitness added: “I don’t understand why they were so aggressive towards us.

“We weren’t causing a problem, all we had done was stand up, which is a normal thing to do at a football match.”

The fan said his group of friends, who are season ticket holders, were sat in the front two rows of the West Stand during the Leasing.com Trophy game, which Blackpool lost 3-1.

They were ejected from the stadium with minutes remaining by around 20 stewards.

A number of men from the group have since been in touch with the club to complain about their “unfair” treatment.

A Blackpool official has today been in touch with the man who was punched, who does not want to be named, to arrange a meeting, which is due to take place tomorrow.

A club spokesman said: “Blackpool Football Club is aware of an incident that occurred on the concourse at last night’s game against Scunthorpe United and is taking the matter very seriously.

“An investigation into the incident is now underway and the club will provide a further update in due course.”

The spokesman was not willing to say whether the steward involved in the altercation will face disciplinary action.