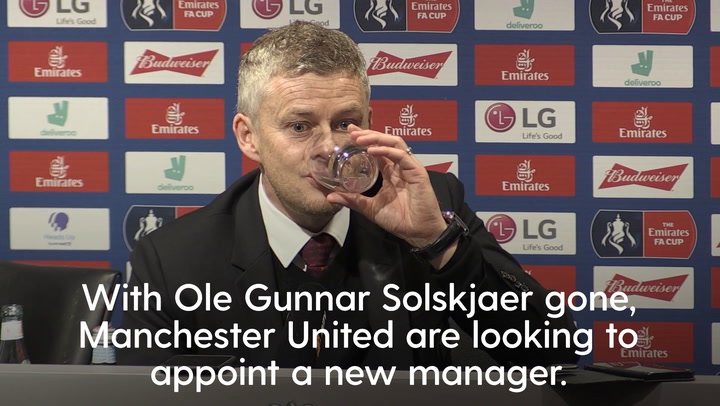 Who will get the Manchester United job?

Former Manchester United defender Steve Bruce has been backed to take over from Ole Gunnar Solskjaer on an interim basis, and he’s said to be ‘very keen’ on the role.

United are looking for a short-term boss to replace Solskjaer having sacked the Norwegian on Sunday, less than 24 hours after a 4-1 defeat to Watford at Vicarage Road.

The loss was United’s fifth in their last seven Premier League games, a disastrous run which has seen them ship four goals at both Leicester and Watford and also lose meekly at home to Liverpool and Manchester City, their two biggest rivals.

The Liverpool defeat was particularly damaging, with the Reds running out 5-0 winners at Old Trafford last month as records tumbled.

Many expected Solskjaer to be sacked there and then after almost three years in the Old Trafford dugout, but he managed to cling on for another month before Sunday’s announcement.

United have placed Michael Carrick as a caretaker boss for the immediate future, and have confirmed that they are seeking to appoint an interim manager for the rest of the season before going after a big name boss in the summer, when their top targets will become available.

That has opened up the possibility of a surprise name taking over the reins at Old Trafford for the remainder of this campaign, and The Athletic report that Bruce would be ‘very keen’ to take over following his dismissal as Newcastle boss last month.

Bruce oversaw his 1,000th game in management immediately prior to his sacking by the Magpies, who have since appointed Eddie Howe as their new boss in the wake of their £305million Saudi Arabia takeover.

The former United captain would be a left-field choice as a short-term boss, but former Arsenal and England defender Sol Campbell thinks his appointment is a possibility.

“Do they stick or move? If they move it’s costing a lot of money.

“To move Ole on and to bring someone in, it’s a lot of money.

“Maybe is a Steve Bruce good? For just six months? I don’t know. Who knows?

“But it’s a real kind of sticky wicket big time, because either they stick or move. Whatever they do, it might be the wrong answer.”

Solskjaer conducted an emotional interview with United club media on Sunday, and backed Carrick to succeed in his short-term role ahead of Tuesday’s Champions League trip to Villarreal.

“As I’ve said to them this morning as well, trust yourselves, you know we’re better than this,” he said.

“We’ve not been able to show it but go out, chest out, enjoy being a Man United player, in the Champions League, on the biggest stage.

“If and when you win the game, you’re through to the next round, Michael [Carrick] is going to be in charge.

“Michael, I have the utmost respect [for], I love Michael to bits. I’m becoming emotional now because he’s top. They’ll be fine. I’ll watch them and support them.”