Stay inside at dusk and dawn to avoid bites from EEE mosquitoes, state officials warn

EEE fears sweep US: Officials in 3 states warn residents to stay inside at dawn and dusk and to NOT touch dying birds

Officials in New Jersey, Michigan and Massachusetts are advising people to cancel end-of-summer picnic dinners and stay indoors at dusk and dawn to stay safe from EEE-carrying mosquitoes.

EEE – Eastern equine encephalitis – is a virus carried by the insects which causes severe brain swelling and is deadly in 30 percent of cases.

Until this year, that is. Cases have been surging in the US as rising temperatures drive mosquito population booms.

Bites are the primary way the bugs transmit the disease to humans, but officials in one Massachusetts town are begging residents not to touch dead birds that may be infected. 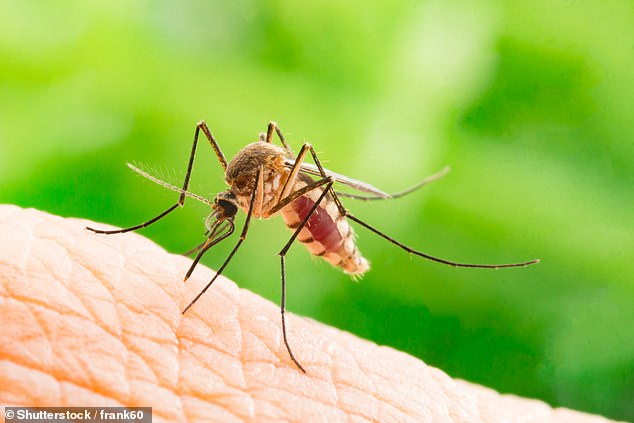 Cases of mosquito-borne Eaastern equine encephalitis, or EEE are surging in the US. Health officials in Michigan, Massachusetts and New Jersey are warning residents to stay indoors at peak activity hours, drain standing water and leave dead birds untouched

New Jersey has seen one confirmed case of EEE this month, Michigan has confirmed one as well, and four have been reported by the Massachusetts Department of Public Health.

Yesterday, reports emerged that a 14-year-old girl in Michigan was on life support with a suspected EEE infection.

Health departments in states with cases of EEE have begun testing mosquitoes for the viral disease.

So far, 22 mosquitoes in New Jersey have tested positive, as have 334 in Massachusetts.

Health officials in both states as well as Michigan have put out public warnings about the disease.

‘These cases, along with confirmed cases in horses and deer in the state, stress the importance of taking precautions against mosquito bites.’

In Massachusetts, one woman died after contractin EEE, Tufts University Hospital, where she was treated, told Boston.com.

The infection begins with flu-like symptoms and can progress to seizures, disorientation and leave sufferers in comas.

Officials from one town there, Fairhaven, has been getting calls from citizens worried about dead birds they’ve found.

Bitten birds can carry the disease, but the health department is not equipped to test them for EEE.

‘While we understand the concerns residents may have with possible correlation to EEE, our department does not have any knowledge of knowing if these birds have contracted EEE, nor do we have the necessary equipment to conduct testing,’ officials said in a statement.

READ  Who are the smokers that haven't quit?

‘We are urging residents to please leave these birds where they are and to not come in contact with them.

‘Please do not bring birds or animals to the Health Department, Police Department or the Animal Control Office.’

Instead, officials in all three states are advising residents to be sure to wear DEET insect repellent if they must be outside.

They also suggested draining standing ground water that serves as fertile breeding ground for the bugs.

And, if possible, experts advise to avoid being outdoors around dawn and dusk when mosquitoes that could carry the disease are most active.

You can use a potato to help get rid of neck pain and migraines, says expert