Stargirl: Who Are the Seven Soldiers of Victory? 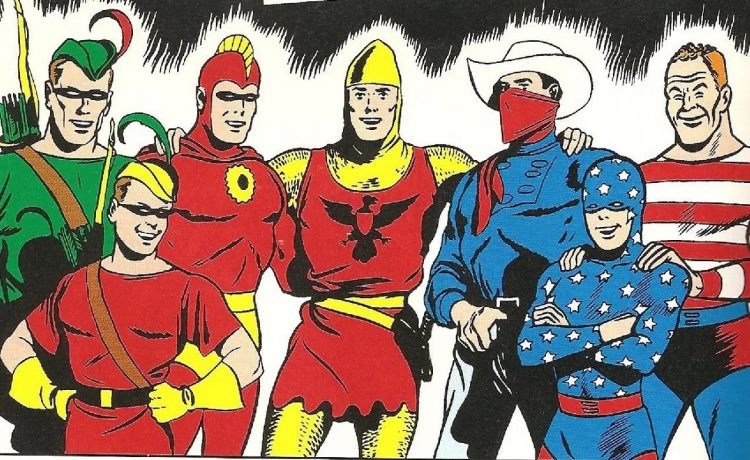 The name was revived for a Grant Morrison DC Comics event called Seven Soldiers, which showcased a very different Shining Knight, a new version of Jack Kirby’s Guardian, Mister Miracle, Bulleteer, Frankenstein’s monster (yep), Zatanna, and Klarion the Witch Boy. It absolutely rules and you should read it on DC Universe.

But the version of the Seven Soldiers of Victory we’re introduced to on Stargirl is very much the original/traditional model of the team. In “Brainwave,” once again, Pat Dugan is giving Courtney Whitmore a history lesson, and as is the source of so many great DC Comics Easter eggs on this show, we get an old black-and-white photograph featuring the heroes.

From left to right we have…

The Crimson Avenger and Wing

The Crimson Avenger pre-dates Batman as the first masked hero in DC Comics, first appearing in Detective Comics #20 in 1938. Essentially a knock-off of popular radio hero the Green Hornet, the Crimson Avenger was Lee Travis, aided by his sidekick Wing. The Crimson Avenger’s original costume is exactly what we see in this photo, but he later adopted a more traditional superhero costume. Here, Wing is wearing the costume he sported during the Crimson’s tights-and-cowl days, and they’re pretty similar.

In case you needed any additional proof that Stargirl doesn’t take place on the Arrowverse Earth-Prime, here it is. I’m not sure who that is in the Green Arrow suit, but maybe, just MAYBE there’s a tiny resemblance to a more clean cut Stephen Amell. Sorta. If you squint.