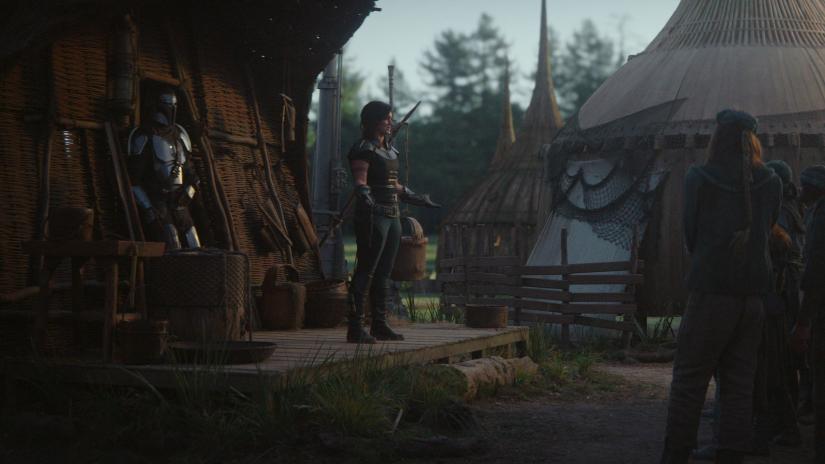 It’s common knowledge that Akira Kurosawa’s films were extremely influential on George Lucas, who folded samurai ethos and costumes into his fictional Jedi. To see the latest episode of The Mandalorian copy The Seven Samurai’s story so closely is both a reminder that Star Wars owes a lot to its Japanese predecessors and that Kurosawa’s ideas tended to be very fine stories.

In episode four, the Mando meets Cara Dune (Gina Carano) and takes a job defending a farming town from raiders. The two warriors need to train the farmers to fight against the raiders’ heavy weaponry, and meanwhile, Mando gets a taste of a possible alternate life where he settles down in peace. Bryce Dallas Howard’s Star Wars directorial debut is an entertaining, colourful episode with more cute baby Yoda and and a fun new bounty hunter bromance.

With the Mando’s personality well established in the first three episodes, here we see a challenge to his heart. Trying to avoid the Bounty Hunters’ guild, he wants to lay low, but the past keeps catching up to him. He’s tempted to stay, because of the pastoral setting and its avatar, a widowed farmer who takes a shine to him. But this idyllic life isn’t mean to be for Mando.

At last, the episode is set on a very distinct planet instead of the beautiful but similar desert landscapes of the first three-episode arc. Shining krill and two-legged agriculture droids give the low-tech landscape a distinctly retro-futuristic look. Yet again, the show pleasantly evokes the feeling of reading a Star Wars tie-in book, one chapter at a time, more so than the animated shows do. The pacing of the show continues to be strong, too, the lingering shots entertaining.

This episode’s music explores more electronic territory than it has in the past. The cute little alarm bell of a bomb’s timer turns into a synthetic chase tune that perfectly fits an energetic scene before the music returns to a more traditional sound. It was also a great choice to stop the music entirely for Cara Dune’s introduction, putting the focus squarely on the combatants.

And speaking of those fights, each fight scene in this episode begins with a chaotic rhythm but gains clarity as it goes on. Cara’s intro is a blur, as it is for Mando. When he gets his bearings, her forceful haymakers are in complete focus. Their fight against one another was a no-holds-barred fistfight, refreshingly free of Jedi tricks and cleverly choreographed to include both character tells and theatrical moves.

All of her scenes are enlivened by the much anticipated appearance of MMA fighter Gina Carano, whose acting chops are as accomplished as her punches. Cara Dune’s physical presence practically makes shockwaves; she’s a powerful, brawny fighter who effortlessly fits into the Star Wars world despite the franchise not often giving female characters brawler roles. She and the Mando have an instant rapport, the choreography setting them up as mirror images of one another and the actors playing off each other well. They have a sense of deep understanding when it comes to worldview—both are fighters hiding out and looking for a new cause to fight for. She fought against “ex-Imperial warlords” until the rise of the New Republic. “When the Imps were gone the politics started,” she says, a baffling and intriguing perspective. Will we learn more about Cara Dune’s opinions about what exactly counts as apolitical? Maybe.

The raiders themselves aren’t very remarkable—in a very Star Wars move, the suffering farmers are all human while the raiders are all be dog-like aliens (they’re Klatooinians, which were first introduced in Return Of The Jedi). Their most powerful weapon is an automated AT-ST, much more frightening here than in the Original Trilogy, when the Ewoks felled some of these two-legged walkers. Howard channels her Jurassic World experience to make the AT-ST animalistic and imposing.

What is there left to say about Baby Yoda, the internet’s darling? He is, of course, super cute in this episode, toddling around in what looks like a single pant leg. He’s not so much a humorous character as a serene but unpredictable one, appearing where he’s not expected and refusing to stay in place. (His wanderings aren’t a plot-relevant gag, though, which makes them even better. He’s a nuisance, but quietly.) His role in this episode doesn’t exactly expand, but he does act as Mando’s consciousness, especially toward the end of the episode. His willingness to hug and be coddled is an obvious visual contrast to the Mando’s reluctance to take off his helmet or initiate any physical contact.

Mando’s willingness to leave the baby behind in the peaceful farming village came as a surprise to this viewer. Mando’s decision to lay low to protect the baby solidifies him as a foster dad, willing to turn over his own life for the child. The central emotional connection is between the two of them, and we don’t see Mando coming to this decision to leave with as much deftness as episode three showed his thought process when he stole the child back. Overall, something feels missing from the emotional core of the story. It’s about Mando having to keep living the loner life, but feels like either a rehash or a rewrite of all the emotional work he did in episode three. Perhaps asking him to take off his helmet here is too much, too fast—it’s certainly leading to something later in the season. Cara and the leader of the farmers are both new allies for the Mando, but they never talk to each other beyond a quick “thank you,” a missed opportunity for Cara to talk more deeply about why she’s as hard pressed for credits as Mando is.

Although the emotional core of the episode isn’t as strong as last week’s The Sin and the derivative story was distracting, the introduction of Cara Dune and the clarity of the direction merits it an overall positive review.

Read Megan’s review of the previous episode, The Sin, here. And here’s everything you’ll find on Disney+, arriving in the UK next March.