The president of Lucasfilm has explained why the original director of Star Wars: The Rise of Skywalker was fired from the movie.

Kathleen Kennedy, who heads up the studio that’s famous for helming the Star Wars and Indiana Jones franchises, said in a new interview that Colin Trevorrow had missed out on crucial development stages because he hadn’t worked on the previous films from the current sequel trilogy.

Trevorrow, who directed Jurassic World (2015) was set to direct and co-write the space saga’s ninth episode, which is due to hit UK cinemas later this month (December 19).

But by September 2017, Trevorrow had parted ways with the project and J.J. Abrams was drafted in to take over. “Creative differences” were cited as the reason for his departure.

Now, Kennedy has shone a light on the bigger picture, which is that Trevorrow was simply at a “a huge disadvantage” by not being involved in the first film of the sequel trilogy, 2015’s The Force Awakens, directed by Abrams.

“Colin was at a huge disadvantage not having been a part of Force Awakens and in part of those early conversations because we had a general sense of where the story was going,” Kennedy told Gizmodo.

“Like any development process, it was only in the development that we’re looking at a first draft and realising that it was perhaps heading in a direction that many of us didn’t feel was really quite where we wanted it to go.”

She continued: “We were on a schedule, as we often are with these movies, and had to make a tough decision as to whether or not we thought we could get there in the time or not. And as I said, Colin was at a disadvantage because he hadn’t been immersed in everything that we all had starting out with Episode VII.”

READ  Martin Lewis kicks off debate about misleading film listings, says there are too many adverts

Trevorrow, meanwhile, has been busy with other projects including The Book of Henry (2017). He is set to direct Jurassic World 3, which is expected to hit cinemas in summer 2021. The film will bring back Sam Neill, Jeff Goldblum, and Laura Dern to reprise their roles from the original 1993 Steven Spielberg-directed movie, Jurassic Park.

CS Comics: 1st Trip to Galaxy’s Edge for Rise of the Resistance! 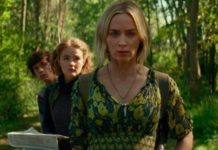