Star Wars 9 Rise of Skywalker Disney D23 TRAILER: Has Rey turned to the Dark Side? WATCH 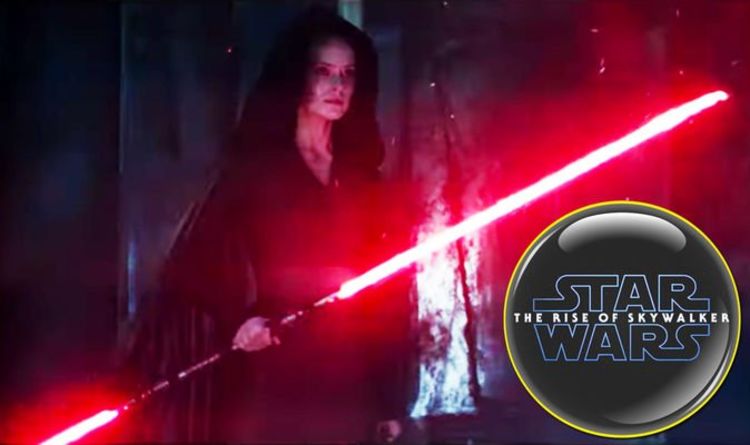 This weekend’s Star Wars Episode IX: The Rise of Skywalker trailer shown at Disney D23 has finally arrived online. And just as was described, the first half includes iconic moments from previous episodes in the Skywalker Saga, before debuting exciting new footage. We see Rey, Poe, Finn, Chewbacca and C-3PO approaching what appears to be the Aki-Aki natives of the desert planet Pasaana. Next up, a new shot of the late Carrie Fisher’s Leia, who will feature in The Rise of Skywalker thanks to deleted scenes from The Force Awakens.

Then Resistance and First Order fighters and cruisers appear, in what looks like the start of a battle.

Followed by a shot of Finn with new character Jannah aboard the Millennium Falcon, and what appears to be Lando Calrissian piloting behind them.

But then we’re met by C-3PO whose eyes have gone red – does he hold a recording or message from the past linked to the Dark Side?

Suddenly a flash of a powerful red destructive force – has yet another Death Star been constructed?

DOES THIS PROVE THE RISE OF SKYWALKER’S ENDING WILL HAVE A 13 YEAR TIME JUMP?

The trailer then focuses back on Rey, who throws Luke’s blue lightsaber through a tree in a forest setting, but it returns to her, not unlike Thor’s hammer.

Then comes a climactic lightsaber fight between the Jedi and Kylo Ren atop the wreckage of Death Star II, as also seen in the first teaser trailer.

This is met with Palpatine’s voiceover saying: “Your journey…nears its end.”

We then heard Darth Vader’s breathing (is he back?) and the shocking sight of Rey in a Sith robe with a double red lightsaber that she suddenly unlocks into a position identical to Darth Maul’s weapon.

Just what is going on? Has Rey turned to the Dark Side?

It’s certainly possible with the return of Palpatine, but maybe there’s more to all this than meets the eye.

Perhaps this is a vision or dream or maybe even a clone of Rey’s?

Star Wars Episode IX: The Rise of Skywalker is released in UK cinemas on December 19, 2019.