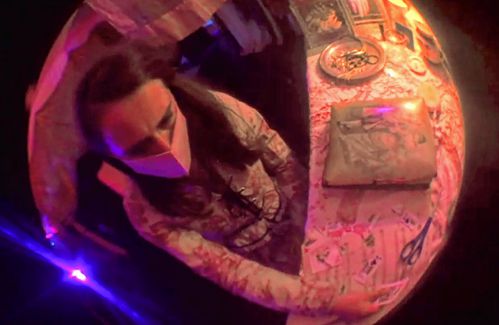 In the 12 months since COVID-19 shuttered performance spaces around the region and the globe, ghosts fill the darkened venues.

Wrangling some of those ghosts is the challenge of one fictional stagehand at the centerpiece of a coming live theatrical videogame show that Greenfield-based Eggtooth Productions is presenting with The Shea Theatre in Turners Falls and Northampton’s Academy of Music. The production will be Zoom-ing out of both theaters Feb. 18-20 and 25-27, twice nightly.

As an interactive theater experience, staged in live performances from the two venues, “Stagehand” will let audiences participate remotely through the eyes of the stage-crew avatar, Charlie, who’s imagined as someone trying to run through several ghost scenes from Shakespeare’s “Hamlet.”

Director John Bechtold, who also wrote the unscripted work, which has videogame elements as well as those of interactive theater, says creating it using the pandemic standby Zoom medium grew out of a shared desire to bring life to both theaters.

Those pieces, along with “The Water Project” about the pre-Quabbin Swift River Valley, which he worked on in 2016, exemplify the immersive experience approach Bechtold relishes, in which the theater space itself becomes an integral part of the audience’s experience.

“Immersive theater is about non-traditional spaces,” says Bechtold. He became drawn to the radical approach while earning his master’s in theater at Harvard in 2009, and then began collaborating with McInerney in 2011. “But it’s also about establishing a world that you’ve been invited into and can play in, even as a theatrical narrative is unfolding.”

A sabbatical year in 2017 placed Bechtold in London, and he researched immersive theater practices by several companies around Great Britain.

In “Stagehand,” the screens through which audience members Zoom become “a sort of window, a gateway or portal into something you wouldn’t have the privilege to see,” he says. In this case, it’s the world of Charlie and the actors he’s working with,” with whom the audience can participate through the writer-director’s tight structure of key lines and plot arcs.

With lessons learned from eight previous performances of “Stagehand” in October, he believes this iteration has worked past the inherent kinks of of having actors and audience separated by cyberspace.

“We figured it out,” Bechtold says. “Actors are trained in creating imaginary scenarios and environments, and in some ways, that’s not too far from this. We’re finding there’s something that reaches across that divide that still fuels our actors.”

For audience members, too — many of whom have been living through a year of being “Zoomed out” — there have been lessons learned from October’s performance.

After all, Bechtold admits, noting the kinds of recorded performances some production companies have experimented with during the pandemic, “One of the real pieces of magic in all theater is feeling a live interaction between you and the performance. There has to be something live about it.”

Ticketing for this month’s performances at 7 p.m. and 9 p.m., for example, provide for five pods of up to six people, so that friends and families can experience the show together as mini theater parties, even if they’re geographically separated. A sixth open pod per performance allows for individual and more affordable pricing for people who prefer to buy single tickets.

The production at the 840-seat Academy and 350-seat Shea involves up to 30 production members, including six Charlies and six managers, each of whom is assigned to the pods to assure the technical quality of their experience of the music, videos, props and costumed actors.

Getting an audience past the hurdle of yet another Zoom session may have seemed like a challenge, even for McInerney, she acknowledges.

“I thought I’d have to get over my Zoom rage to be OK with it. But the minute you’re in there and engaged and it all melts away, and you’ve just poured yourself through this portal, the word ‘Zoom’ will never enter your mind again,” she promises.

The notion of combining videogames with theater might not appeal to traditionalists, she admits.

“But anybody younger than 40 or 45 gets it. Once you’re in there in the Zoom room talking to Charlie, the language of what it is, is completely immaterial. It’s just your own imagination going.”

Bechtold reaches back to his own experience beginning in 2009 on immersive theater pioneer Punchdrunk’s production of “Sleep No More” in Cambridge, when six disgruntled theatergoers would storm out of performances each night, predicting ‘Stagehand won’t appeal to everyone.

Richie Davis was a writer and editor for more than 40 years at the Greenfield Recorder. His website is richiedavis.net.

READ  WHO: People can get addicted to video games (2018) - The Laconia Daily Sun