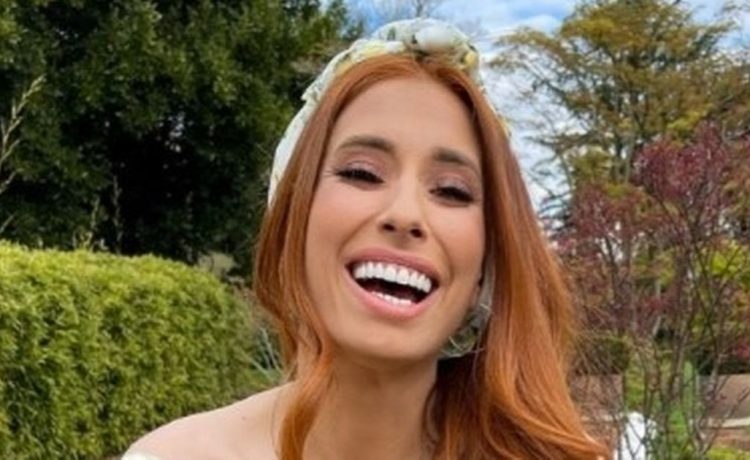 Stacey Solomon was left red faced when she accidentally twinned with her sister.

The Loose Women star explained that she was going on a family day out with her elder siblings Gemma, who told her to wear shorts for the occasion.

But when she turned up, the sisters realised they were wearing almost identical outfits comprising of white t-shirts, green shorts and white trainers.

But rather than being embarrassed by the mix-up, down-to-earth Stacey thought it was hilarious and took to Instagram to document it.

Stacey and her kids and Gemma and her children had planned to meet up for a day at an adventure playground.

Filming Gemma in front of a bridge the kids were climbing on, Stacey said.: “We’ve come to meet my sister for the afternoon she told me to wear shorts…”

“Oops!” Stacey laughed as she panned down to her matching outfit.

Gemma gave a twirl as Stacey wolf-whistled her.

Stacey and her youngest son Rex, two, enjoyed playing on all of the trampolines and walkways in the trees.

They then went for a walk around a lake and watched the ducks.

Stacey then shared a hilarious clip of her and Gemma struggling to walk on a rickety bridge in their matching outfits.

“For anyone wondering if me and my sister looked ridiculous in our matching outfits,” she captioned it.

“We didn’t need out matching outfits to look ridiculous we do it so well without them.”

“The shorts were just the icing on the cake,” she added, followed by a string of cry laughing emojis.

Stacey and Gemma have a close and playful relationship, with the older sister recently mocking Stacey for getting emotional in one of her Instagram posts.

The TV star got teary over a beautiful tree that had blossomed in her garden and filmed a video of herself getting emotional about it.

And rinsing her in the way only siblings can, Gemma filmed Stacey sitting on the ground filming the video as she mocked her from behind the camera.

In the clip posted of Stacey, she can be seen passionately singing along to the Disney song How Far Will I Go from the film Moana.

“This is not normal behaviour,” Gemma captioned the video, adding laughing emojis.

Her day out comes after Stacey hit back at a troll who criticised her DIY makeover of her new home, which she’s dubbed Pickle Cottage.

Stacey has decorated her conservatory with fake plants and painted the walls bright purple, which the troll called “tacky”, “cheap”, and “dodgy”.

“Do what makes you happy!” Stacey defiantly told her followers. “Don’t worry about what anyone else thinks!

“If you love it, go for it… Love ya Wilma always bringing the happy vibes.

“I love it, I love the purple and the flowers and the smudged paint. Do what makes you happy.”